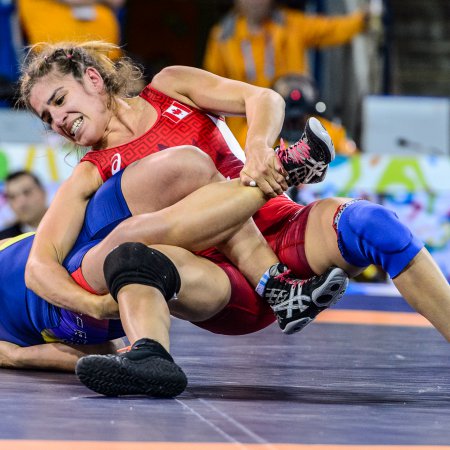 Michelle Fazzari wrestling at the Pan Am Games.

“It’s a great start for me in the new quadrennial winning my first medal at the world level,” said Michelle Fazzari. “I will use this performance to catapult me to the next level.”

“It was a great day today for Brock Wrestling and Canada Wrestling converting yet another Badger into a world medallist,” said Brock wrestling head coach Marty Calder. “It was another team effort by the coaches and athletes at Brock who all contributed to this performance.”

“What a great performance by Michelle, in particular beating last year’s Olympic silver medal winner in her first match,” said Calder. “We see great things in the near future for her leading into the 2020 Olympic games in Tokyo.”

The Badgers’ Diana Weicker placed 12th after posting a 1-1 record with her lone victory coming against Sandra Paruszewski (GER).

Jessica MacDonald (53kg) and Olivia Di Bacco (69kg) were both scheduled to compete Thursday at the World Championships and Jevon Balfour (74kg) will compete Saturday.