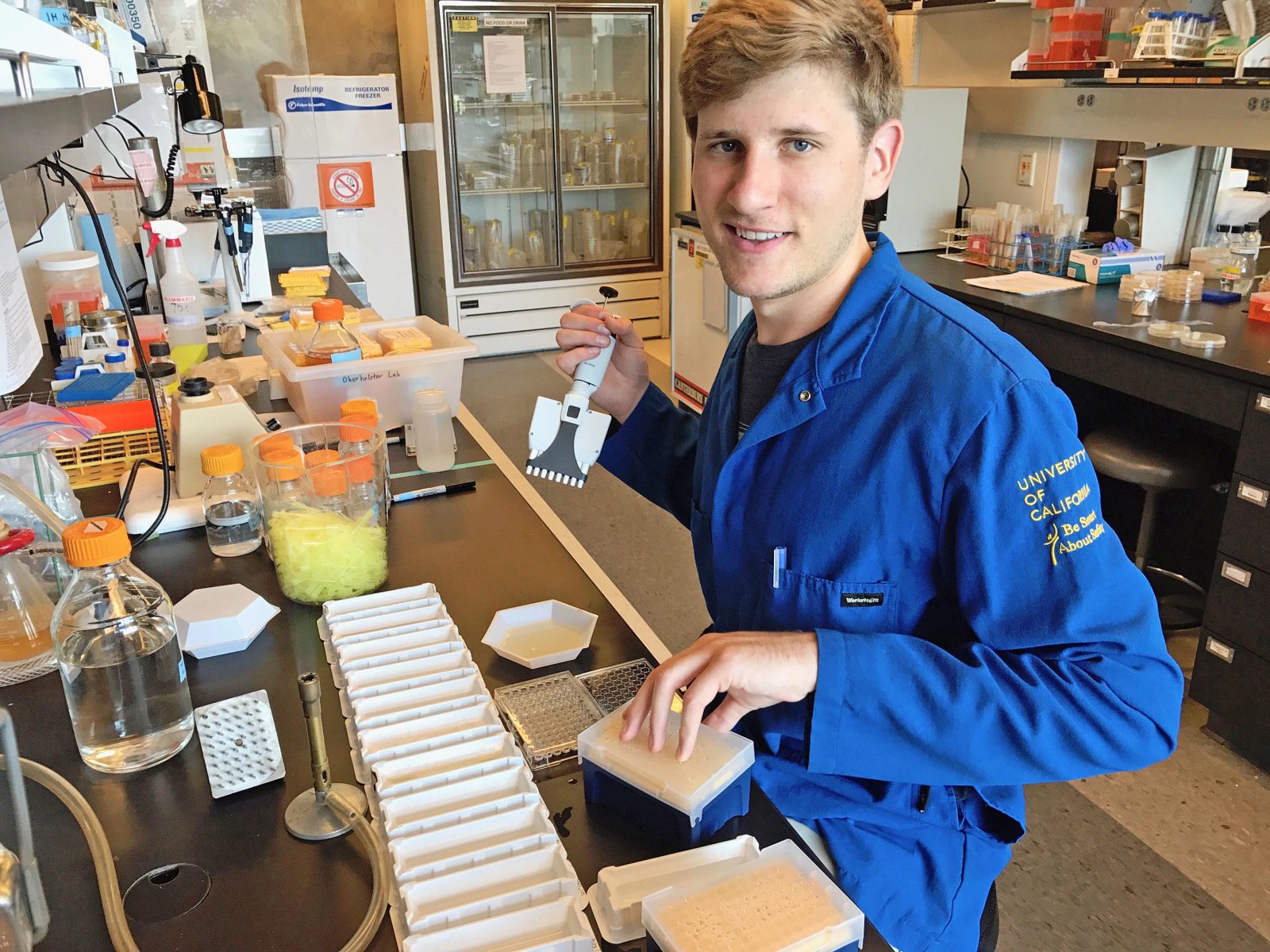 After graduating from Brock’s Oenology and Viticulture (OEVI) program in 2016, Paul van der Merwe is now on track to complete his Master of Science in Viticulture and Enology from the University of California, Davis this fall. He said the skills and experience he got from Brock and working with CCOVI researchers helped prepare him for his studies at the California university.

Graduating from the Oenology and Viticulture (OEVI) undergraduate program just last year, the Brock alumnus is already set to complete his Master of Science in Viticulture and Enology from the University of California, Davis this fall.

He attributes his success at the institution — he finished his classes with a 4.0 GPA — to the knowledge and skills he developed at Brock.

He was also able to work on real-world industry priorities alongside researchers at CCOVI during his studies.

“Working on my thesis under the supervision of (CCOVI Director) Debbie Inglis really helped me prepare for the lab work at UC Davis, and definitely made me extremely confident in my abilities in the lab,” he explained. “That ‘Brock Experience’ was a huge benefit to my resume and my education.”

Van der Merwe’s never one to shy away from sharing that knowledge, especially when it comes to what he’s learned about the Canadian wine industry.

He recently set up a tasting session at UC Davis, pouring several white and red varietal table wines as well as icewines from Ontario and British Columbia for the Californians to sample. He said his peers were pleasantly surprised to learn the wines they sampled were actually from North of the border.

“It was really interesting for the students to see the differences in the wines between Canada and California, and to really show them that we have a high-quality industry here in Canada,” he said.

Van der Merwe isn’t the only student to see the value of rounding out his education in both cool- and warm-climate regions.

In Andrea Barker’s case, however, she decided to pursue her MSc at Brock after cutting her teeth in California first.

She earned her Bachelor of Science from the University of Maryland before becoming the assistant winemaker for a small premium producer specializing in Pinot Noir and Chardonnay in the Santa Rita Hills region of Santa Barbara County. 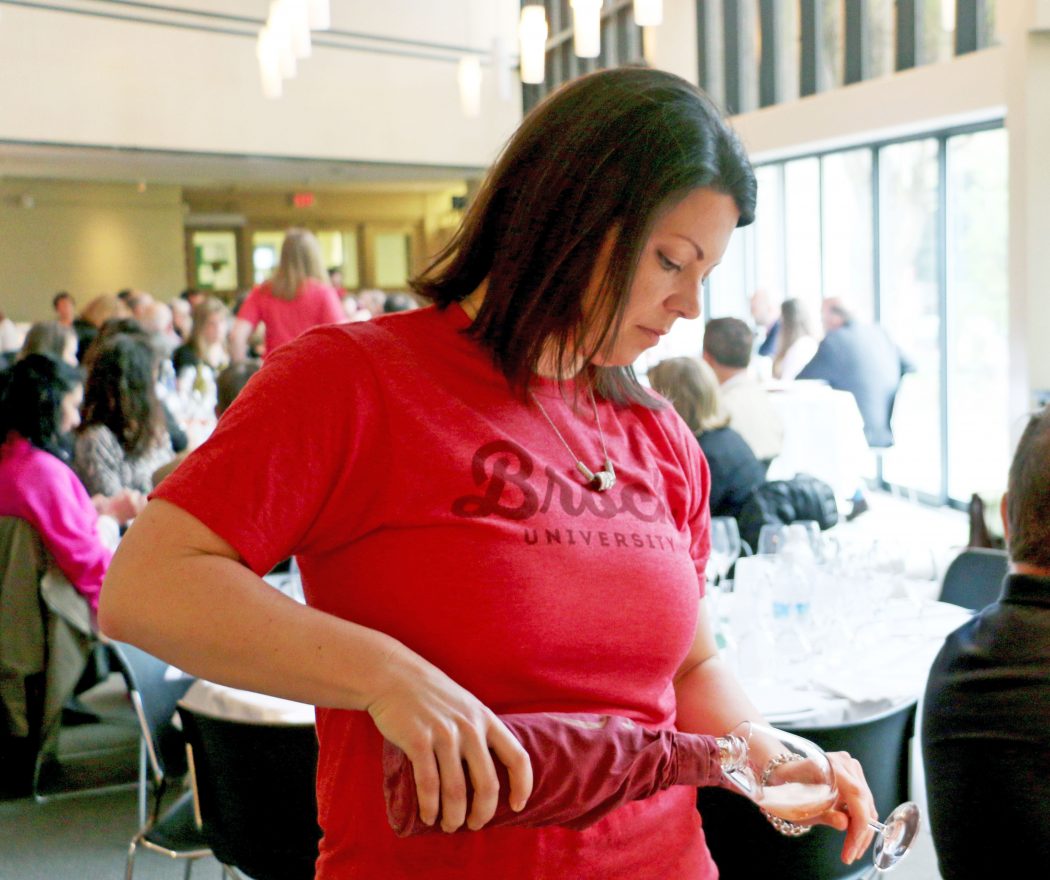 After studying in Maryland and then becoming an assistant winemaker in California, Andrea Baker decided to round out her education by continuing her studies in Canada at Brock’s Cool Climate Oenology and Viticulture Institute, where she is pursuing her master’s and participates in events such as the recent Expert’s Tasting that was held on campus this past spring.

While the region is internationally renowned for its winemaking, the allure of gaining a well-rounded education and industry-applicable experience in a variety of climates and conditions drew Barker back to St. Catharines.

“I’m originally from Ontario but haven’t worked here in the wine industry,” she said. “It’s exciting to finally come home and put what I learned to use here working on research at CCOVI that has real impacts to the grape and wine industry.”

Barker has enjoyed the sense of camaraderie she has experienced at CCOVI, where she is currently studying under the supervision of Inglis and senior staff viticulturist Jim Willwerth, and within the Ontario grape and wine industry as a whole.

“There is a good community here,” she said. “In Ontario, people realize the benefit of information sharing, supporting your neighbours and developing an industry together. It’s going to benefit everyone if the industry does well.”

That sense of community isn’t lost on van der Merwe.

While he has enjoyed his time basking in the West Coast sun, he said the Niagara region is beckoning. After finishing his thesis in the fall, he will return home to join Arterra Wines Canada (formerly Constellation Brands) as Assistant Winemaker in their Niagara Falls facility.

“It was really good to get a broad understanding of different problems, solutions and new technologies from a variety of different winemaking regions,” he said. “It has helped me round out my knowledge and will both help me deal with any future winemaking problems and impact my wine style for the better in the future.”