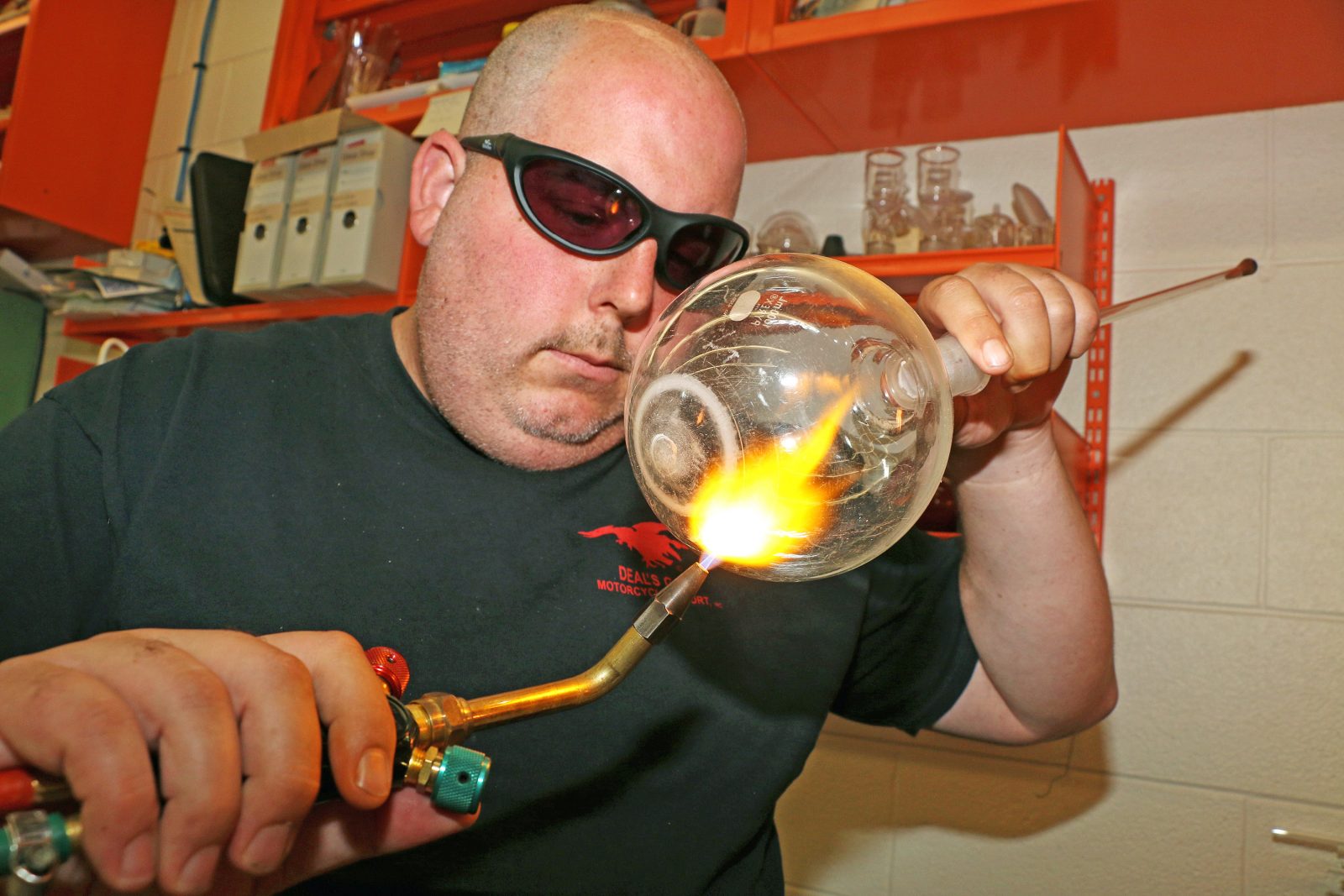 Brock University glassblower Jordan VanDenhoff learned the craft from his father, John, who previously held the same job at the school for 40 years.

When John VanDenhoff retired as Brock’s longtime glassblower in 2006, he passed the torch — both literally and figuratively — to his son, Jordan.

The meticulous art form, and the importance it plays on the University’s campus, is a generational legacy for the VanDenhoff men, with the impressive trade handed down from father to son.

The craftsmanship can be seen in the straight lines and delicate curves of the glassware found in laboratories all across campus.

The VanDenhoff family has deep roots in the glassblowing tradition.

John’s brother, Jack, was initially offered the glassblowing job at Brock in 1966 — though he recommended John take the position instead. Jack ended up working as a glassblower for the National Research Council (NRC) for 35 years — a job his son Michael eventually took over.

John was with the University for 40 years and began grooming Jordan at an early age in hopes of someday handing over the family trade.

“I started coming into Dad’s shop when I was seven years old,” the younger VanDenhoff recalls. “I watched him closely and I helped him out.”

However, after a year of computer science studies, he returned to his true passion and began apprenticing with his father in 2000.

As Brock’s glassblower, VanDenhoff fulfils orders from faculty and students for a wide range of glassware such as beakers, test tubes, pipettes and flasks used in scientific experiments.

Although VanDenhoff has kept the notes, drawings and blueprints of objects he and his father have created throughout the years, he’s “always making something new, custom made, according to the specifications of researchers, which sometimes can be complicated.”

Much of his work also involves recycling existing glassware, evident by the long counters overflowing with a kaleidoscope of glass containers of all shapes and sizes.

“It’s more cost-effective for us at the University to repair stuff instead of buying stuff new; a lot of it is salvageable,” VanDenhoff explains.

A typical day begins by firing up the oven. While waiting for the temperature to climb, VanDenhoff checks his list of orders, prioritizing those that are needed sooner than others.

All of VanDenhoff’s creations start from glass tubes that are shipped to him by a supplier.

He attaches a tube onto a machine called a “lathe,” which spins the tube glass around. A torch shoots out a white-hot flame that VanDenhoff can move from side to side by turning a wheel.

The flame melts the glass. VanDenhoff sometimes sits at his bench, using a flame from a “bench burner” machine that resembles a blow torch.

“I’ll expand or contract the tube to the shape that we need,” he explains. “I also use gravity to pull the glass down. Then I’ll blow into a tube, which expands the glass.”

As he puffs into the tube, VanDenhoff uses pliers, tweezers and other tools to shape the glass according to the blueprints.

Once he shapes the glass the way he wants, VanDenhoff places objects into the hot oven to “bake” them into solid glassware.

“A good day is when the glass doesn’t break,” he chuckles, adding that, in his industry, timing is everything and can be quickly derailed by interruptions.

“You have to do things quickly,” he continues. “The longer you’re building something, the uglier it’s going to look. You have to go fast to make it look good.”

VanDenhoff says his work is challenging, but rewarding.

“Some people come to me with intricate designs. I feel good when I can make it and when the glass doesn’t break.”

Chemistry researcher Mukund Ghavre concurs, saying that VanDenhoff and his workshop are a “great help” for researchers.

“Jordan offers his suggestions to make the glassware befitting to my needs,” says the postdoctoral researcher. “Likewise, he also mentions the limitations in making a certain piece of glassware. Thus, his expertise always helps us in getting glassware as per our requirements.”

Ghavre says he and his colleagues appreciate repairs being done in a few days or even hours, much faster than if the glassware was shipped out for fixing.

“The most important part of having Jordan in the University is that the glassware can be obtained at a much cheaper price,” notes Ghavre. “There can be a five- to 10-time rise in the price of glassware should we decide to buy it from commercial sources.”

To keep on top of his game, VanDenhoff attends a week-long seminar hosted by the American Glassblowing Society once a year.

“But it was mostly training from my father that got me here,” he says.