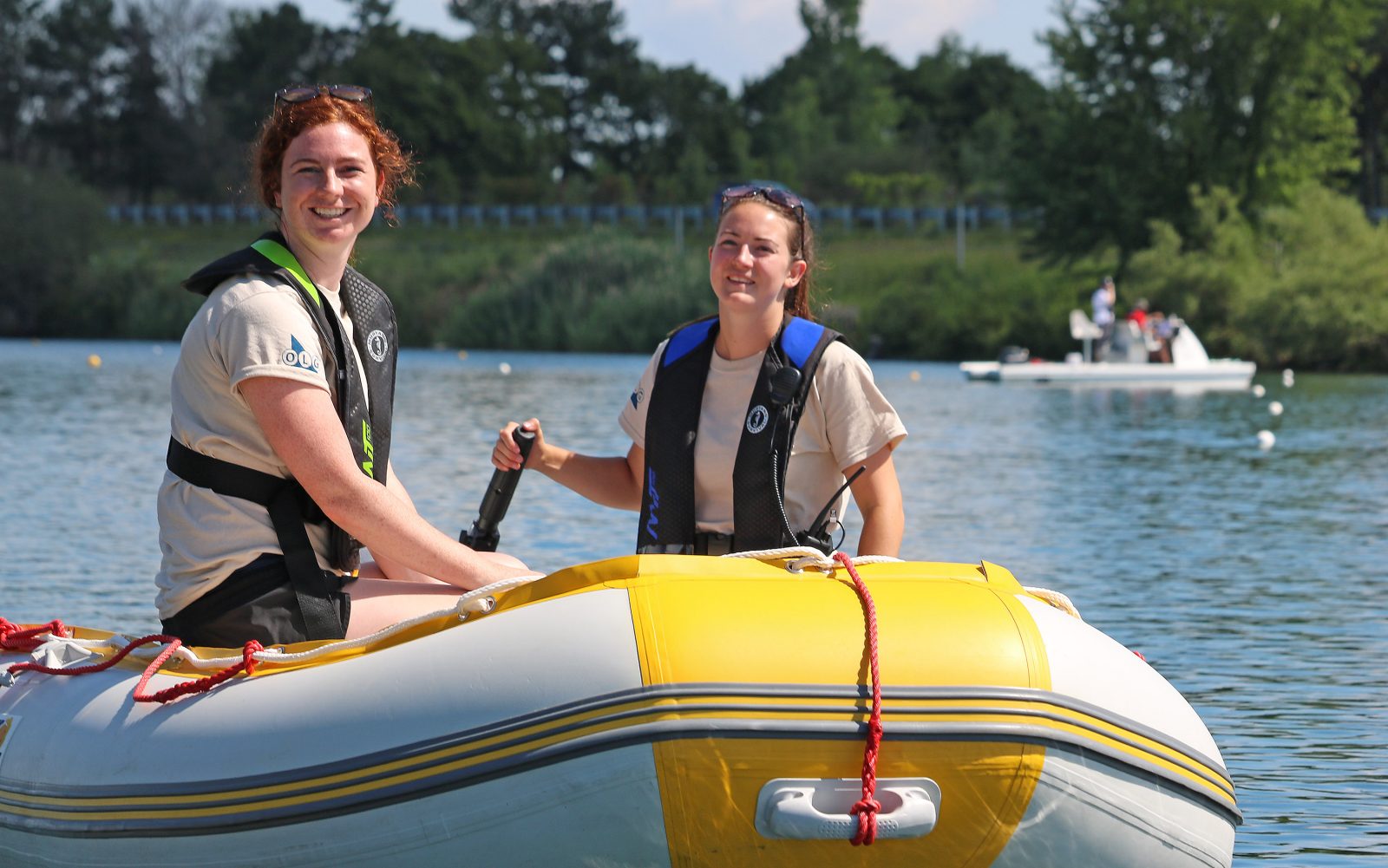 “Right now, our students are moving from venue to venue, helping athletes, volunteers and each other to ensure these games are a success,” says Department of Sport Management Associate Professor Laura Cousens who has been checking in with students at the sport and cultural venues throughout southern Ontario. “The students are working together and creating a volunteer culture, which is exactly what I was hoping for.”

This week, more than 50 Brock students are volunteering for course credit as the result of a unique partnership between the Toronto NAIG and Brock’s Major Games Field Course, led by Cousens. 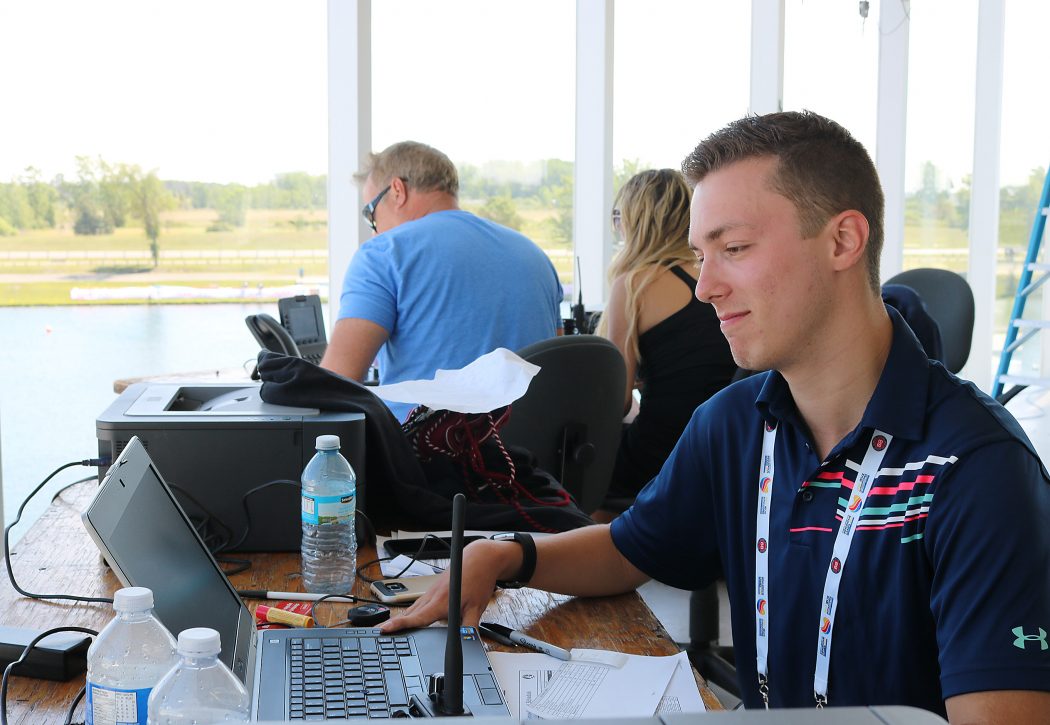 SPMA student Liam Miller checks on race information in the announcer’s booth during the U16 Female 3000m final canoe race at the Welland International Flatwater Centre.

“All of our students have completed in-class training to prepare them for their current in-the-field roles,” says Cousens.

The training, which began in February, included project management, games hosting skills for a multi-sport event, problem-solving, cultural competency training and an introduction to indigenous people in sport in Canada.

Brock students are involved in all aspects of the games, including:

Fourth-year SPMA student Rob Cheevers, who is volunteering as the venue manager for the Welland International Flatwater Centre, says the course experience has been a “perfect complement” to what students learn in class.

“We have the opportunity to work as a team to create work plans, solve problems and apply the skills we’ve learned in lecture in a practical setting. It has been an unforgettable experience,” Cheevers says.

“With each games, we learn something new and constantly evolve to improve our training for the next time,” Cousens says. “The event hosting experience students gain by participating in a major games in this capacity have resulted in full-time jobs for graduates.”

Through a second initiative, seven current and former Brock students are working with Brock University’s Centre for Sport Capacity to administer surveys collecting economic impact information of the games. Their work will kick off a new Sport Consulting@Brock initiative. 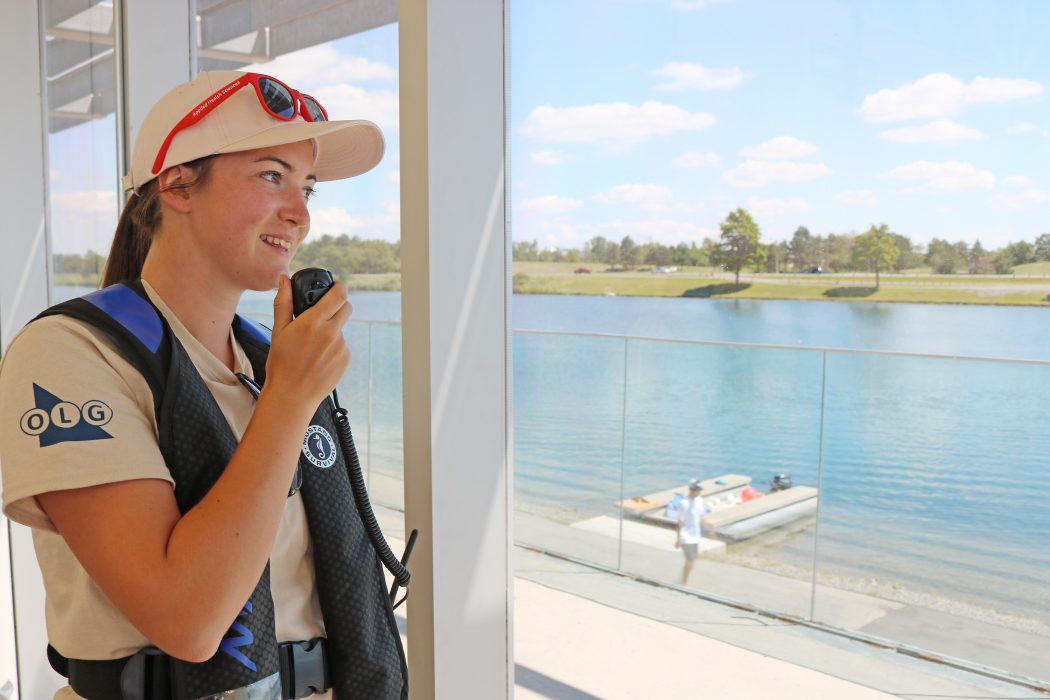 SPMA student Brenda Wardhaugh radios for information as part of her volunteer responsibilities at the Welland International Flatwater Centre for the NAIG 2017 Canoe/Kayak races.

“The NAIG economic assessment is our first consulting project and we are excited to help the event,” said Sport Management Associate Professor and Director of the Centre for Sport Capacity Julie Stevens. “The project will provide important economic outcome information about the games and hopefully enable leaders to gain support for future indigenous sporting events in Canada.”

The two teams of students will administer surveys at athletic venues in Hamilton and York between Thursday and Saturday.

The eight-day NAIG, which wraps up Sunday, is the largest continental sporting and cultural gathering of indigenous peoples, drawing more than 5,000 athletes and 2,000 volunteers, along with spectators and dignitaries from across North America.

“The games provides a unique opportunity for students to immerse themselves in a spectacular showcase of indigenous culture, all while inspiring the next generation of indigenous athletes through the celebration of sport achievement,” says Marcia Trudeau-Bomberry, CEO of the Toronto 2017 Host Society, and a Brock alumna. “We’re thrilled to be joined by students from Brock to deliver a best-in-class sporting and cultural experience for participants and spectators of the Toronto 2017 NAIG.” 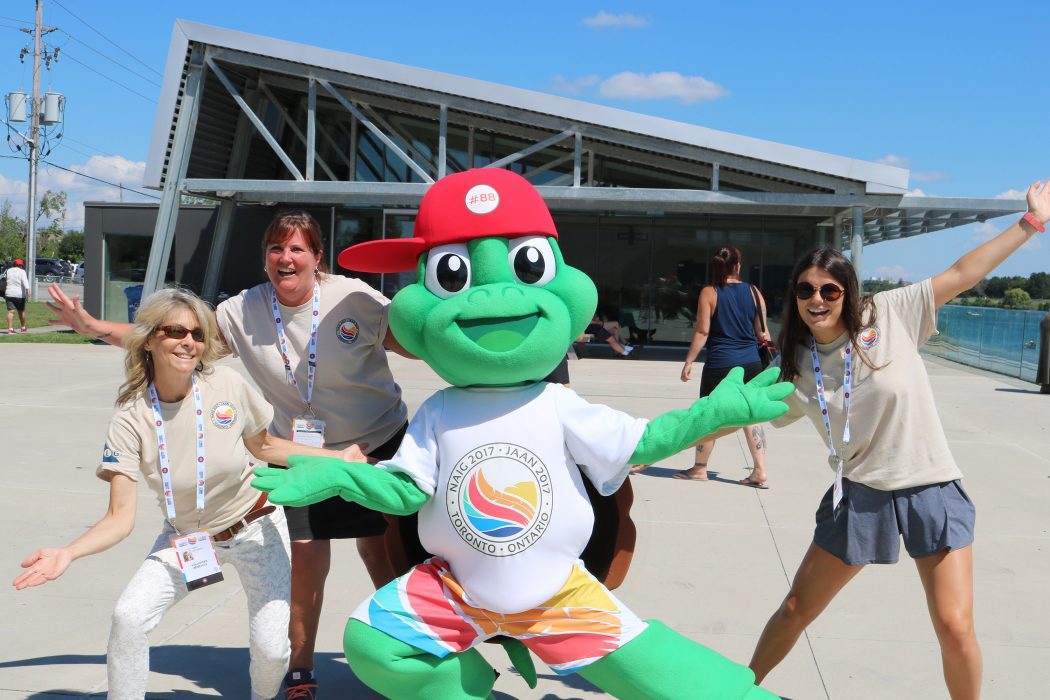