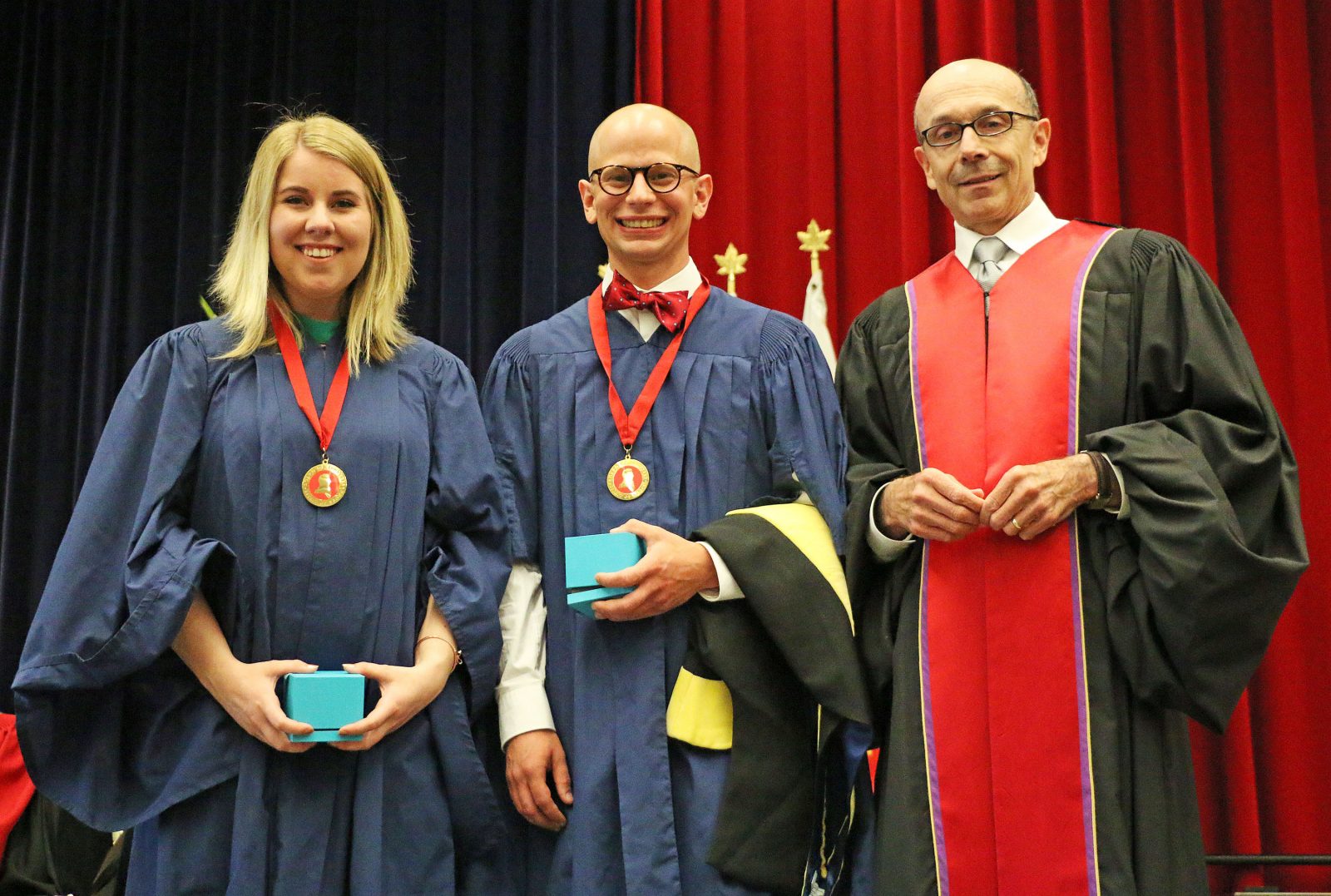 Devon Ainslie and Joseph Robertson are each presented with a Spirit of Brock award for the Faculty of Social Sciences by John Fisher of Brock's Board of Trustees.

Deciding which career path to travel down at the age of 17 can be a daunting task, even for the brightest minds.

When Devon Ainslie began her post-secondary school career at another institution, she struggled to find her place.

It wasn’t until transferring to Brock, where she allowed her passions to guide her, that she thrived, going on to academic, professional and personal success.

During her time at Brock, Ainslie became immersed in the community. She spent time co-ordinating various events, participating in experiential learning and assisting with research.

She was a frequent ambassador at the Brock Open Houses and the Ontario Universities Fair, and helped to organize the Terry O’Malley Lecture in Marketing and Advertising and a fundraising walk for Autism Speaks Canada.

Initially studying Criminal Justice and Public Policy at the University of Guelph and Journalism at Humber College, Ainslie followed her true passion for digital culture and transferred into the Media and Communications program with a concentration in Digital Culture at Brock. Through the experiential learning opportunities provided in the program, she was able to intern at McMaster University in the Faculty of Health Sciences and was awarded a pass to the Women in Leadership and Business Conference, further growing her strengths and confidence.

Ainslie spent time as a research assistant at Brock and continues to work with her supervisor and Communications, Popular Culture and Film Professor, Karen Louise Smith, on exploring coding, data portals and Internet security.

“All of these experiences have shaped me in different ways throughout my time at Brock,” she said.

Ainslie was awarded the undergraduate student Board of Trustees Spirit of Brock Award during the Faculty of Social Sciences Convocation on Monday.

She was honoured to be chosen for the award and credits her professors, mentors, family and friends for shaping her life and encouraging her to succeed.

Ainslie is proud to follow in her parents’ and brother’s footsteps as a Brock graduate.

The award is given to students who demonstrate leadership, innovation, courage, inspiration and community involvement.

For Robertson, the award signified validation for following his passion and being part of a community.

With only a few accredited programs of its kind in Canada, Robertson chose the ABA program at Brock for the on-campus experience, community-focused environment and the opportunity to work with leading industry experts.

During his time at the University, he established his own community by getting involved through his role as a teaching assistant and research assistant and volunteering for both community and recruitment events.

Robertson was also placed as an instructor and therapist to provide ABA services for children with high-needs at a private centre, where he was later hired.

Robertson will be returning to Brock in September to continue working toward fulfilling his life-long passion of becoming a board-certified behaviour analyst, providing a positive environment for children with developmental and intellectual disabilities.