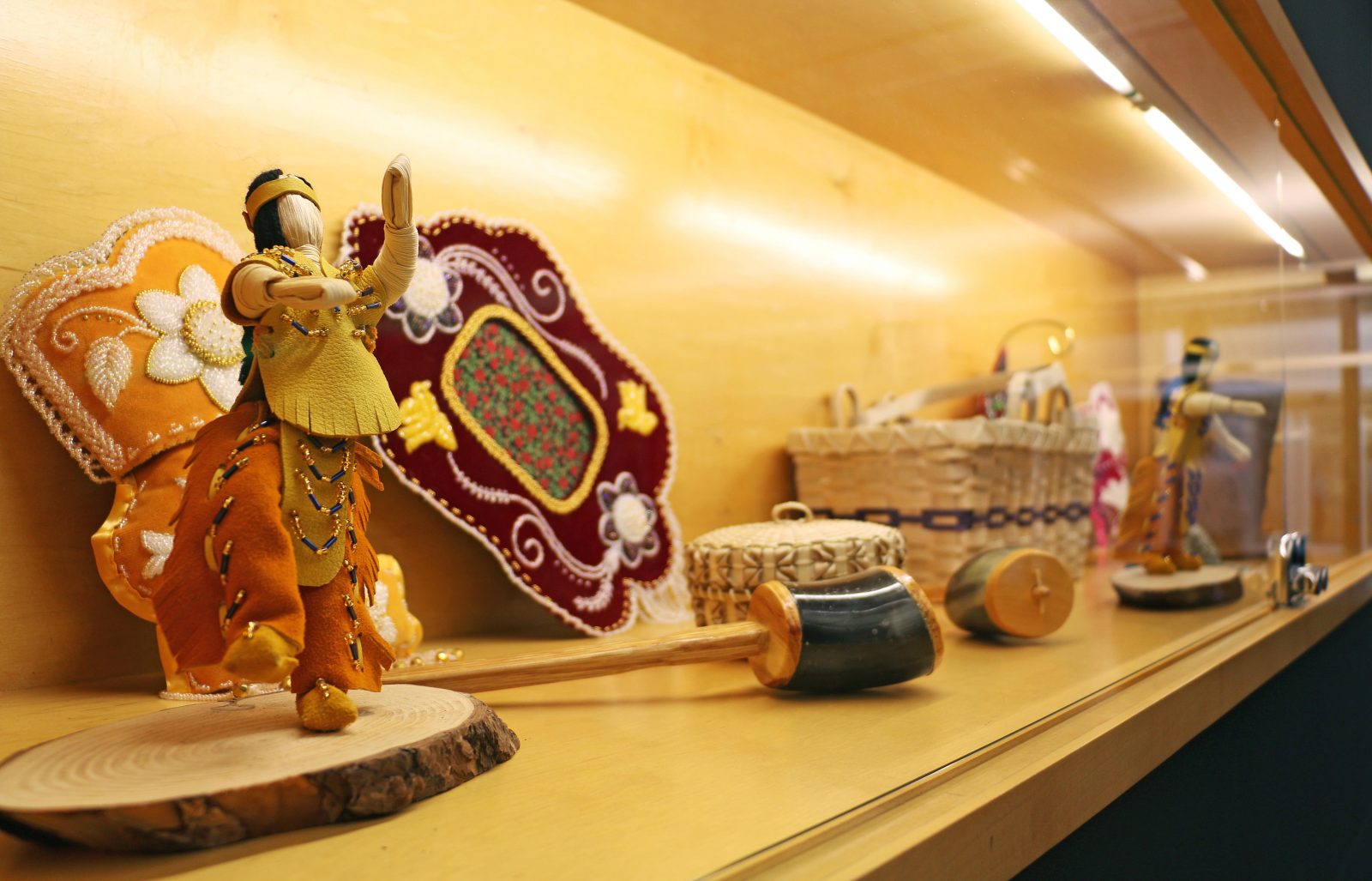 The display cases both inside and outside of the James A. Gibson Library are filled with cultural items to mark National Aboriginal Day. The displays will remain in place until the end of the month.

As National Aboriginal Day arrives on June 21, the Brock community can take time to reflect on the meaning of the day, and learn more about the contributions of indigenous people to Canada.

This year marks the first time Brock has designated June as Aboriginal Month, a recognition that culminates this week with eye-catching displays inside and outside of the James A. Gibson Library, as well as online education promoted through Brock’s website.

Held on the summer solstice, the Aboriginal Day is meant to recognize and celebrate the unique heritage, diverse cultures and outstanding contributions of First Nations, Inuit and Métis peoples.

Although these groups share many similarities, they each have their own distinct heritage, language, cultural practices and spiritual beliefs.

For Gary Parker, Cultural Advisor to the Tecumseh Centre and a member of Brock’s Aboriginal Education Council, National Aboriginal Day comes with many meanings.

It’s a time for recognition, celebration, remembrance and acknowledgement, said Parker, but also an opportunity to begin reconciliation and renewal.

“It’s a day for indigenous people to celebrate,” he said, “but also for everyone to acknowledge the history, the dark times, including the taking of our land, assimilation of our people, colonization and residential schools.”

Parker called it “monumental” that Brock has taken the step to celebrate Aboriginal Month in hopes of raising awareness and educating people on the history of indigenous peoples.

“The University is taking some steps to move forward — every step forward is positive,” he said, while adding Brock’s Aboriginal Student Services, Aboriginal Education Council and recently formed Two Row Council, as well as the Tecumseh Centre for Aboriginal Research and Education, each play a role in the University’s progression.

Parker is hopeful Canadians will begin to better acknowledge and recognize the role of indigenous peoples in the country’s history. For instance, while much is said about Maj.-Gen. Sir Isaac Brock and his part in the War of 1812, less acknowledged is the role played by Tecumseh in bringing the war to an end.

“Often times it’s forgotten,” he said, “and not even told or talked about.”

Parker said it’s important for those critical moments in history to be recognized, and encourages Canadians to educate themselves about the country’s indigenous communities, whether through online resources, visiting community groups or reaching out and connecting with people directly.

“Getting out and talking to people would likely be the biggest benefit. It will help reduce a lot of the stereotypes by educating the broader community.”

Aboriginal Day is a good time to take that important step, he said.

“Many positives can come from the day — education, communication, partnerships, friendships, understanding, peace.”

Parker often accepts public speaking engagements regarding reconciliation, breaking down stereotypes and educating people on the history of indigenous culture from an indigenous perspective.

While it is critical that recommendations from the Truth and Reconciliation Commission of Canada be implemented, action must be taken in partnership with the indigenous community, he said.

“We need to start making those changes now, and I think the first component of that is education.”

Brock Chancellor Shirley Cheechoo said the University is “at the beginning stages toward truth and reconciliation, but strides have been made.” There have been “a lot of conversations, and some courses and some acknowledgements,” but the award-winning aboriginal-Canadian actress and filmmaker still wonders “how that translates into action.”

Cheechoo feels “any progress is good,” but there are more steps needed moving forward before Brock is where it needs to be.

“We’re trying to revive our culture, bring it into prominence again to where the world understands,” he said.

As he does each morning, Widrick will offer a thanksgiving address on Aboriginal Day to show gratitude to the Earth for providing life. It’s a tradition he hopes to share with others on the holiday, to help them understand its meaning.

“We were taught that when the sun starts to rise in the morning, birds start to sing, we need to return thanks to the natural world for the trees, grass and plants for giving us pure, clean oxygen to breathe so we are awake here this morning,” he said.

In Niagara, the public is welcomed to attend an Aboriginal Day celebration June 21 from 3 to 8 p.m. at the Fort Erie Native Friendship Centre, 796 Buffalo Rd. in Fort Erie. There will be a picnic, a variety of speakers and activities for people of all ages.