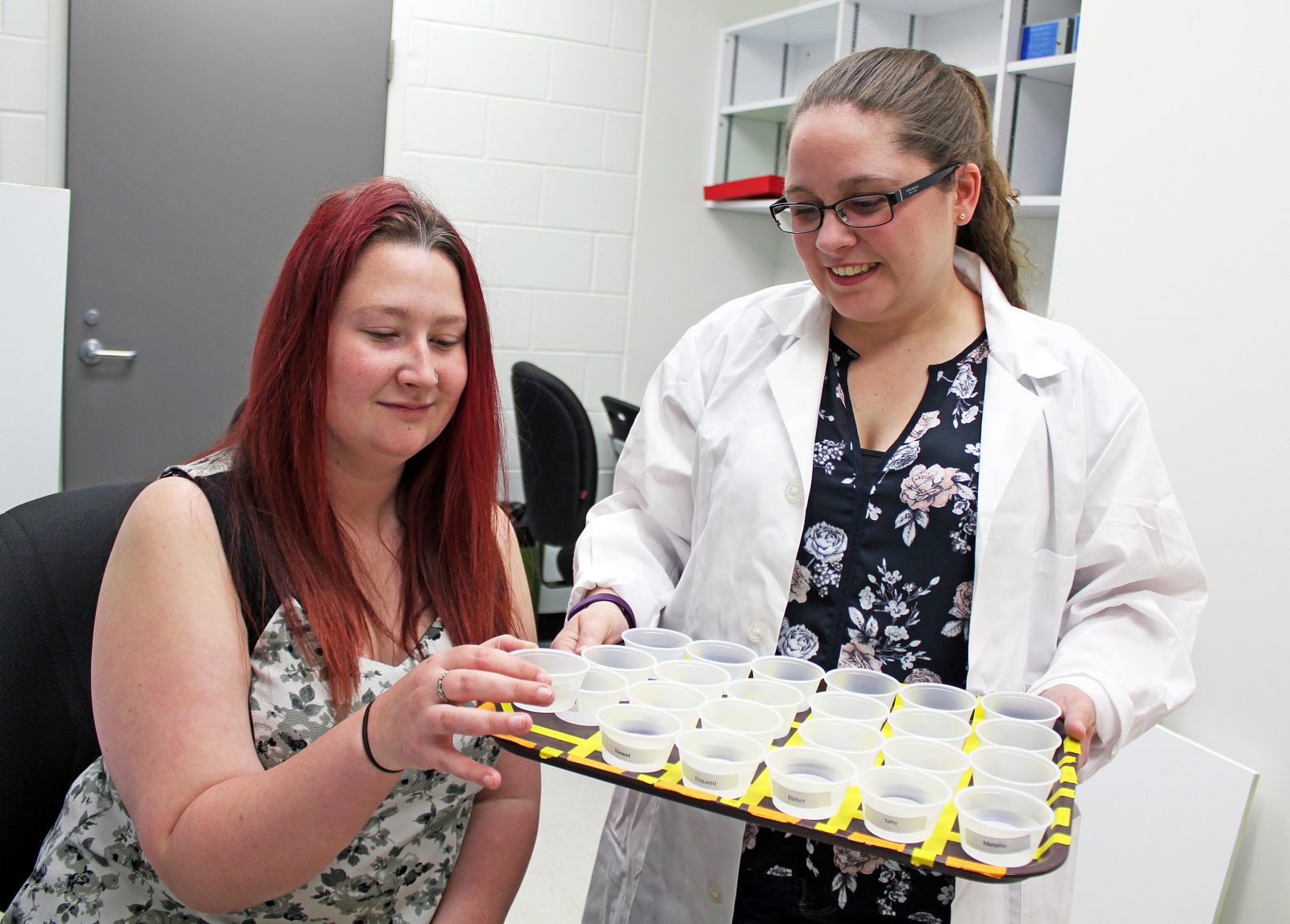 Master’s student Margaret Thibodeau, right, walks Psychology student Hannah Pickering through the process involved in compiling data for her recently published study on the effect of taste on alcohol consumption.

Ever wondered why you favour one type of wine over another — or why you even like to drink wine in the first place?

It turns out the taste buds in our tongues play a key role in guiding our alcohol preferences and consumption habits.

A study by researchers from Brock University’s Cool Climate Oenology and Viticulture Institute (CCOVI) has found that people with very sensitive palates generally consume fewer alcoholic beverages than their less-sensitive counterparts, or even abstain altogether.

The study, Orosensory responsiveness and alcohol behaviour, was undertaken by master’s student Margaret Thibodeau, CCOVI researcher Gary Pickering and Brock graduate Martha Bajec (PhD ’11), and published in the journal of Physiology and Behavior.

“It suggests that there’s something going on that needs further investigation,” said Pickering, “but essentially, the more sensitive your palate is, the more likely you will drink less or avoid alcohol altogether.”

Participants first consumed sweet, sour, bitter, salty, umami, metallic and astringent solutions mixed with water to determine their various taste sensitivities. Those results were then compared with self-reported data on how many drinks each participant would usually have in a month, and what type of drinks they would typically choose to indulge in.

Given many of us avoid traditionally aversive tastes like bitterness or sourness, Thibodeau predicted people who were very sensitive to these tastes in particular would likely drink less alcohol. What was surprising, she said, was that people who were in the mid-range of sensitivity to all tastes tended to be the highest alcohol consumers.

“What we actually saw was a bell curve,” she explained. “Products seemed to be optimized for people with intermediate responsiveness, so you needed, for example, a little bit of bitterness to add complexity, but not too much for it to be unpleasant.”

Understanding how our individual tastes drive our alcohol use is of great value to alcoholic beverage manufacturers and marketers, as well as to the health-care community.

On the one hand, this data can help producers better understand their customers and market their products more effectively. On the other, it can also help develop a more holistic understanding of the causes of alcoholism and other alcohol-use disorders.

“The idea here is that it’s possible that people who avoid alcohol do so because they are particularly sensitive to these aversive sensations — sourness, bitterness, and so on — and these might therefore be predictors for decreased risk of developing alcoholism or other alcohol-use disorders,” Pickering explained. “It’s also an interesting story for the alcohol producers, who are interested in how to optimize the ingredients in different alcoholic products and the way they are marketed to consumers to optimize market share.”

Thibodeau said there is a lot of room to expand on this research, too. Since the participants in this study consumed all of the tasting solutions in water, the obvious next step would be to measure people’s taste sensitivities when they are drinking samples of actual alcoholic beverages. Brock MSc candidate Stephanie Small-Kelly is set to conduct follow-up research that will focus on that exact topic.

“She will be measuring people’s sensitivities as they taste actual samples of beer and cider, which vary in the concentration of bitter and sour compounds,” Pickering explained. “That way, we can see how taste sensitivity to components of alcoholic beverages, such as ethanol and hops, influences people’s perception and liking of these products.”

This type of situational study could also help explain the way people’s tastes change over time and how consumers vary their consumption based on their individual palates.

“We can look at whether you choose to drink vodka with a mixer as opposed to straight if you’re sensitive to bitterness, for example,” Thibodeau said. “There’s also the suggestion that from the time you start drinking to the present, you will become more adapted to the taste of ethanol and start to enjoy the aversive sensitivities in alcohol as complexity instead of a negative. We could also study that in more detail.”