Award winner urges students to be each other’s champions 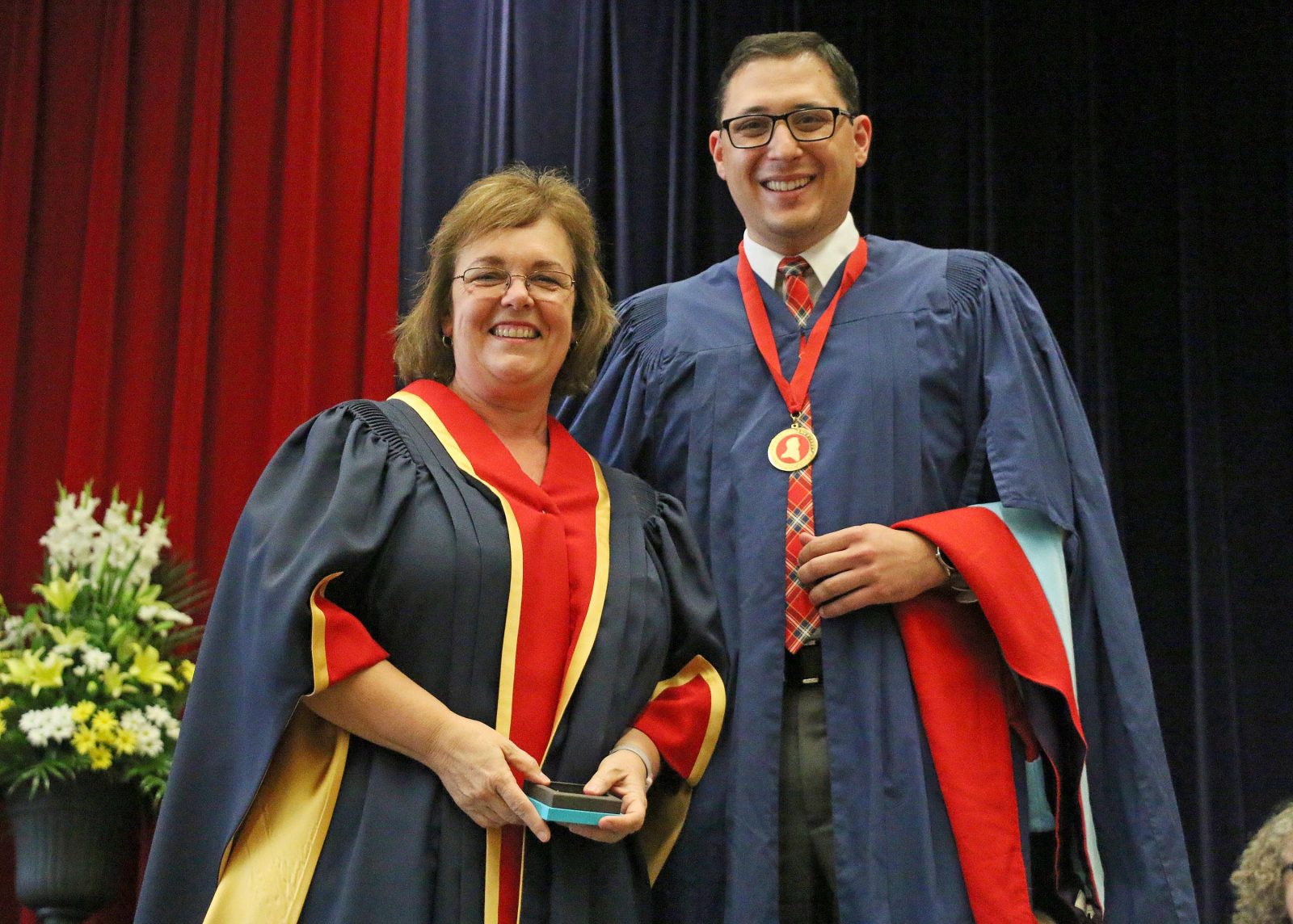 Christopher Ventura was presented with a Spirit of Brock award for the Faculty of Education by Kristine Freudenthaler of Brock's Board of Trustees.

When Christopher Ventura first heard the inspiring words by American writer Tom Peters, he was deeply moved by the message.

He embraced the notion — along with his own mantra of Building Better Badgers — and applied it during his time at Brock, where he worked at becoming a true leader in the University community. 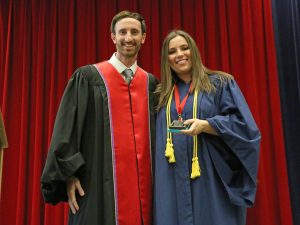 Alyssa Berardocco was presented with a Spirit of Brock award for the Faculty of Education by Mario De Divitiis of Brock’s Board of Trustees.

The award is given to students who demonstrate leadership, innovation, courage, inspiration and community involvement.

During his time at Brock, Ventura served as Director of the Graduate Students’ Association, representing graduate students on Senate, and worked as the Brock University Students’ Union clubs manager, which included the responsibility of acting as Brock’s co-ordinator for the World University Service of Canada Student Refugee Program.

Through the program, Ventura assisted in resettling refugees who travelled to Canada in search of higher education.

Working with newcomers to Canada was an eye-opening experience for the Port Colborne native, who cherished the time he was able to spend with the new students.

“It changes your perspective to see what it’s like for a student who was born in a refugee camp, who grew up in abject poverty and who didn’t have a home to go to. To see them come to Brock, to be a part of our campus and have the opportunity to get a world-class education is amazing,” he said. “I’m so proud of our institution for opening its arms and really trying to make a difference in people’s lives.”

Ventura’s biggest piece of advice to incoming students was to find and follow their passions.

If a club suiting their interests doesn’t exist on campus, they should create it, he said.

“Find a way to make it happen.”

He urged students to support one another and to push each other to become leaders in the community.

“Being someone’s first follower, their champion, is sometimes the little push they need,” he said. “They want to know someone believes in them.”

The Hamilton resident has achieved a reputation for excellence during her time at the University, where she has served in numerous roles in community outreach, marketing, service-learning and student leadership.

She received the Brock Leaders Citizenship Society Award of Merit for contributing some 4,000 volunteer hours during her four years, while maintaining an average of above 80 per cent. 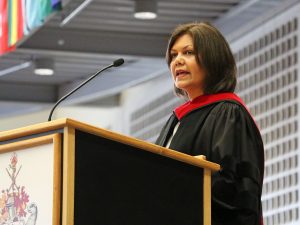 Kamini Jaipal-Jamani, the Faculty of Education recipient for the Excellence in Teaching award addresses the crowd at Tuesday’s Convocation ceremony.

Delivering the Convocation address Tuesday morning was Kamini Jaipal-Jamani, the Faculty of Education recipient for the Excellence in Teaching award.

Jamani told the graduands she follows Albert Einstein’s belief that “Imagination is more important than knowledge.”

“I hope your experiences in the Brock Faculty of Education engage your imagination and emotions so that you can go forth and inspire others to experience joy and wonder in knowledge and learning,” she said.

The afternoon address was delivered by Coral Mitchell, Professor in the Department of Graduate and Undergraduate Education.

Mitchell said she was the first person in her family to attend university, and it changed her life.

“The first lesson I learned, to my surprise, was that I didn’t know everything there was to know,” she said. “I was presented with ideas I had never thought of and possibilities I had never dreamed about.”

She said she teaches her students the concept of GINTOT, an acronym for “gee, I never thought of that.”

“A GINTOT is a new piece of information that opens your mind and expands your horizons,” she said. “Not just of what you know, but of what questions you think are possible to ask. I encourage you to continue learning, to seek new GINTOTs and to be continually amazed.”