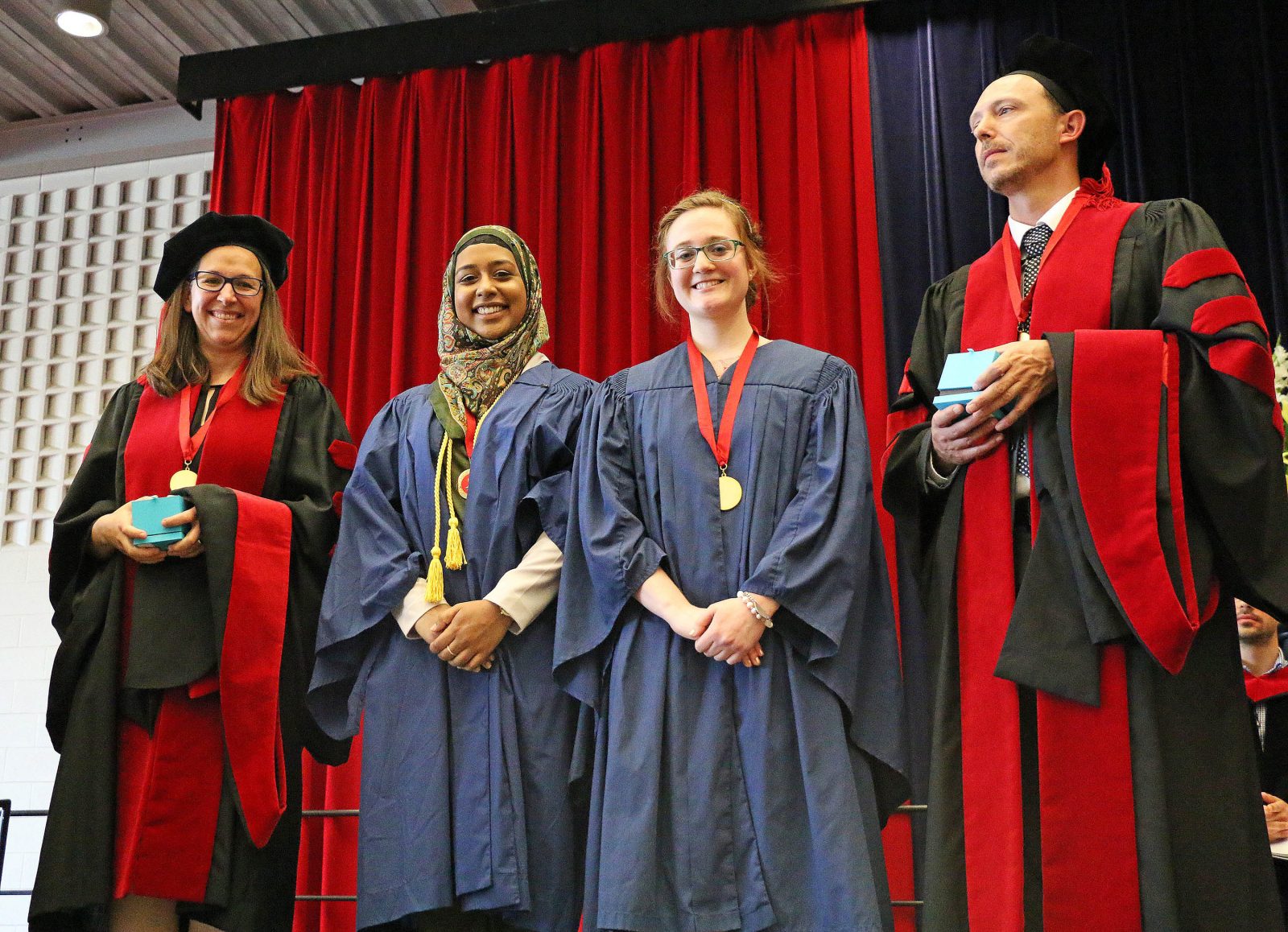 Jessica Vickruck, Aniqah Zowmi, Annika Mazzarella and Grant Yocom were each honoured with a Board of Trustees Spirit of Brock award during Friday's faculties of Humanities and Math and Science Convocation ceremony.

Annika Mazzarella’s university years were filled with many ups and downs, all which contributed to an important life lesson.

When the 22-year-old St. Catharines native focused her studies on History of Art and Visual Culture, as well as Medieval and Renaissance Studies, she encountered people along the way who were discouraging, some even disapproving, of her chosen career path.

It was her time at Brock that taught Mazzarella the importance of striving to achieve her dreams, regardless of any obstacles in her way.

The naysayers she encountered were offset by the optimistic community at Marilyn I. Walker School of Fine and Performing Arts and at Rodman Hall Art Centre, where Mazzarella always felt included and supported to pursue her career ambitions.

The experience caused her to develop a new sense of self-confidence, refusing to back down from the goals she has set for herself.

That determination, among other impressive qualities, earned Mazzarella the Board of Trustees undergraduate student Spirit of Brock award for the Faculty of Humanities, presented during Friday’s Convocation ceremony — a joint celebration for the faculties of Humanities and Math and Science.

The morning event also saw Grant Yocom recognized as the Humanities graduate student Spirit of Brock recipient, and Aniqah Zowmi and Jessica Vickruck honoured as the undergraduate and graduate student recipients respectively for Math and Science.

Mazzarella said her Brock experience, both inside of and beyond the classroom, provided her with a “solid foundation” to support her future career path as an art curator.

She also represented the University as a student delegate at the 2016 Canadian Conference on Student Leadership.

“With each involvement I had different experiences, however, they proved to me that you can do anything you put your mind to and that there is always something new to learn,” she said.

Mazzarella plans to move to Ottawa this fall to pursue her master’s degree in Art History with a concentration in Art Exhibition and Curatorial Practices.

Her advice for incoming students, in the words of Henry David Thoreau, is to “go confidently in the direction of your dreams. Live the life you imagined.”

“I have been fortunate to have had so many great opportunities,” said the passionate advocate of youth civic engagement, who is known as a leader in the Brock community.

“One of the best things about Brock is that it is a small community and you feel very much supported,” Zowmi said. “It is also a place that encourages you to develop yourself both professionally and personally.”

Zowmi is the first Brock student to win a 3M National Student Fellowship Award for her efforts to empower youth and encourage equality in education.

She served on the University’s Human Rights Task Force, was a member of the Canadian Youth Delegation to the Commonwealth Youth Forum in Malta, where she addressed more than 700 youths at the UN Headquarters, and was a Youth Advisor to the Canadian Commission to UNESCO.

Zowmi, a National Youth Ambassador for Passages Canada, also co-founded BrockU Talks, a speaker’s series for students to promote their engagement on global issues such as peace and sustainability.

Both Spirit of Brock graduate recipients were also recognized for their hard efforts on and off campus.

Yocom has been a leader among graduate students of the new PhD in Interdisciplinary Humanities in its formative years.

He twice served as the graduate student representative on the council in order to provide a student voice as the program structured its regulations and established the format for its comprehensive examinations.

Described as an inspirational leader, Yocom brought students together and has helped to make the PhD in Interdisciplinary Humanities the exciting and innovative program that it has become.

Vickruck has demonstrated exemplary leadership in her research group and among graduate students in Biological Sciences.

Her Master’s of Science produced three published manuscripts on pygmy carpenter bees, and her PhD will produce four major papers on the subject.

She has also worked with a research scientist at the Canadian National Insect Collection in Ottawa, a collaboration that led to offers from scientists at several other Canadian and American universities.