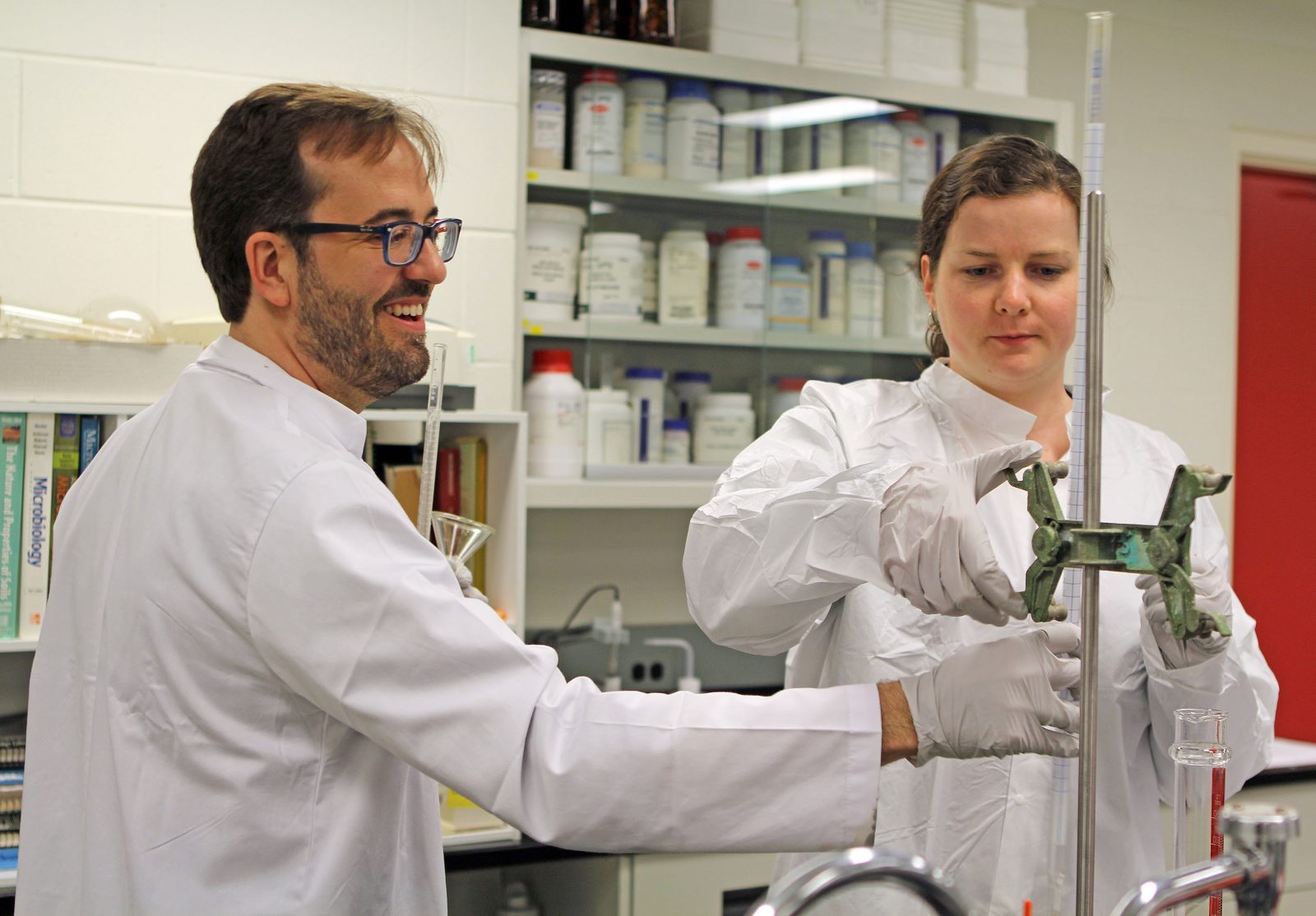 Steve Trussler, OEVI Senior Lab Instructor and Academic Advisor at Brock University, helps one of the cider production students set up her lab equipment for some hands-on cider training.

When Tanya Nijjar wanted to turn her family’s apples into crisp, refreshing cider, she figured learning the trade in Canada would make the most sense.

So when Brock’s Cool Climate Oenology and Viticulture Institute (CCOVI) announced it was hosting the first-ever Canadian offering of a cider and perry production course, she was quick to sign up.

“Cider making has been popping up in the Okanagan and we really want to get into that business,” said Nijjar, whose father has an apple orchard in Vernon, B.C. “I would have had to go to the States before, but learning in Canada really helped me because it explained the Canadian-specific laws and I’ve met people in the industry here that I can learn from and network with.”

Nijjar was among the first group of 25 students able to take the same course at Brock from April 24 to 28.

She said the course gave her a solid foundation of the unique processes and challenges involved with crafting a quality pint of Canadian cider — something that’s increasingly important as consumers develop more of a taste for it.

In Ontario alone, net sales of local craft cider skyrocketed 54 per cent in 2015/16 to $5.1 million, according to the Liquor Control Board of Ontario.

That growing consumer base is also prompting more producers to enter the business, and is why industry professionals and cider enthusiasts from British Columbia to New Brunswick travelled to Brock to learn more.

Theo Ephraim, an amateur cider maker from Montreal, is one such example.

“My girlfriend and I had been looking into taking the course in the U.S., but we were thrilled that we could just come here,” he said. “It’s been great to talk to other people thinking about starting cideries and to apple growers here in Canada. We’re learning different things about taking it to the next level from the home-brewing we’re doing now.”

The course sold out within a few weeks of being announced in February and a waitlist for the next program session is already building up.

“We feel very privileged to be able to bring the program to the Canadian market for the very first time,” said Barb Tatarnic, CCOVI’s Manager of Continuing Education and Outreach.

“CINA is the industry leader in cider education, so for Brock to be the first in Canada to partner with them is very exciting. We are looking forward to including this program in our bank of offerings.”

“It’s a growing thing, so there’s a lot of enthusiasm and excitement about it,” he said. “But because it’s growing so rapidly, there’s a lot more open territory. We feel that this program helps set benchmarks so people have a shared standard, a baseline of knowledge, and will now have the information to make informed choices and help accelerate the rate of progress in the industry.”

With the wait list filling up for the next foundation course, CCOVI is working to finalize a date for a second 2017 session.