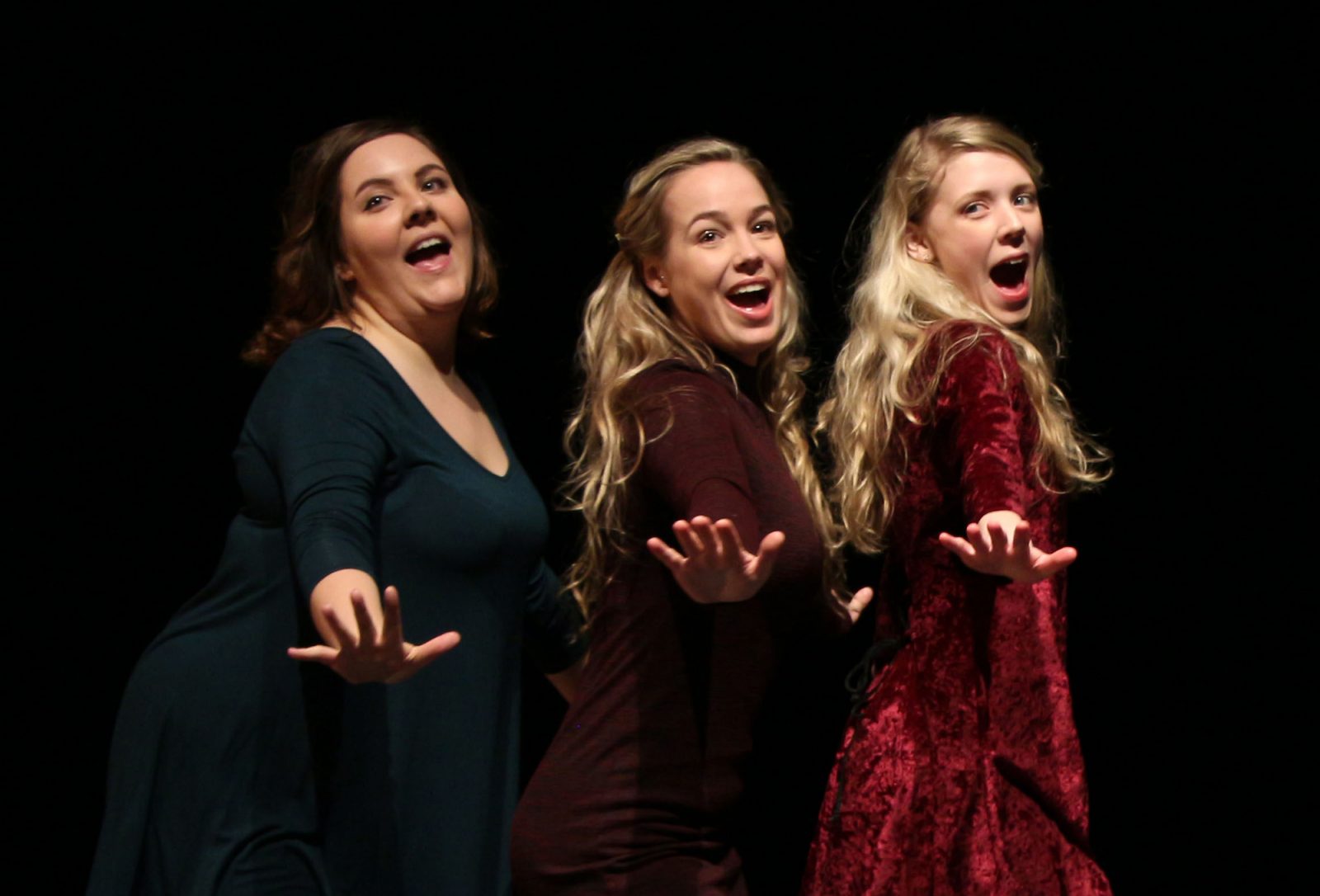 The Bacchae, a Twitches & Itches Theatre production, hit the stage at FirstOntario Performing Arts Centre in January. Hayley Malouin, Kaitlin Race and Sean Aileen McClelland give it their all on stage. (Photo by David Vivian)

Several members of the Brock community are being recognized for their impact on the local arts scene.

Brock alumni, staff and faculty have earned a number of nominations for this year’s St. Catharines Arts Awards, which recognize outstanding contributions to the arts in the Garden City.

Visual artist Lauren Regier (BA ’14), costume designer Jo Pacinda (BA ’13) and the Twitches & Itches Theatre group, run mainly by alumni, are among those in the running for the 2017 Emerging Artist award.

Gordon Cleland, a professor with Brock’s Department of Music and principal cellist with the Niagara Symphony, and Brock dramatic arts professor Danielle Wilson, co-founder and co-artistic director of Stolen Theatre Collective, have both been nominated for the Established Artist Award.

Earning a nomination in the Making a Difference category is Gregory Betts, a poet and professor with the Department of English Language and Literature, and Marcie Bronson, Acting Director and Curator at Rodman Hall Art Centre.

Rodman Hall itself has also been nominated in the Arts in Education category.

Seeing that high level of recognition bestowed upon members of the Brock community creates a sense of pride in anyone affiliated with the Marilyn I. Walker School of Fine and Performing Arts (MIWSFPA), said MIWSFPA Director David Vivian.

The accomplishments of alumni help to reaffirm the work that staff and faculty of the arts school are doing to support the arts in Niagara, he said.

Regier, a graduate from Brock’s Department of Visual Arts, feels participation in the local arts scene is key.

“Some of the best people and institutions in St. Catharines have positioned themselves to be generously receptive of new ideas, artwork and dialogue,” she said.

“When it comes to contributing to the arts community post-graduation, it’s our willingness to attend talks and shows by people we don’t know, or to introduce and guide newcomers — that truly makes one an accessible and valued member of the cultural community.”

Regier is being recognized for her work, which explores the relationship between nature and machines through photography, video, performance and installation art.

Pacinda, a Brock theatre graduate and aspiring costume designer who works with a number of theatre companies in Niagara, has always dreamed of not just starting but building her theatre career in the region.

“This nomination means I’m headed on the right path with that,” she said.

Pacinda said her Brock experience has helped to to get involved and give back to the local arts community.

“The overall support the school has for its current students, alumni and staff is really fantastic,” she said. “It’s with all this support that alumni are able to contribute and help build the St. Catharines art scene.”

The Arts Awards were first presented in 2005 to celebrate artists and supporters in St. Catharines, while also cultivating support for the arts sector.

Awards are given out in five categories: Arts in Education, Emerging Artist, Established Artist, Making a Difference and Patron of the Arts.

This year’s recipients will be announced during an evening of performances on Monday, June 5 at the FirstOntario Performing Arts Centre.

A full list of nominees and more information on their work and contributions is available online.

Tickets for the awards ceremony and arts celebration are available at the centre box office by calling 1-855-515-0722.