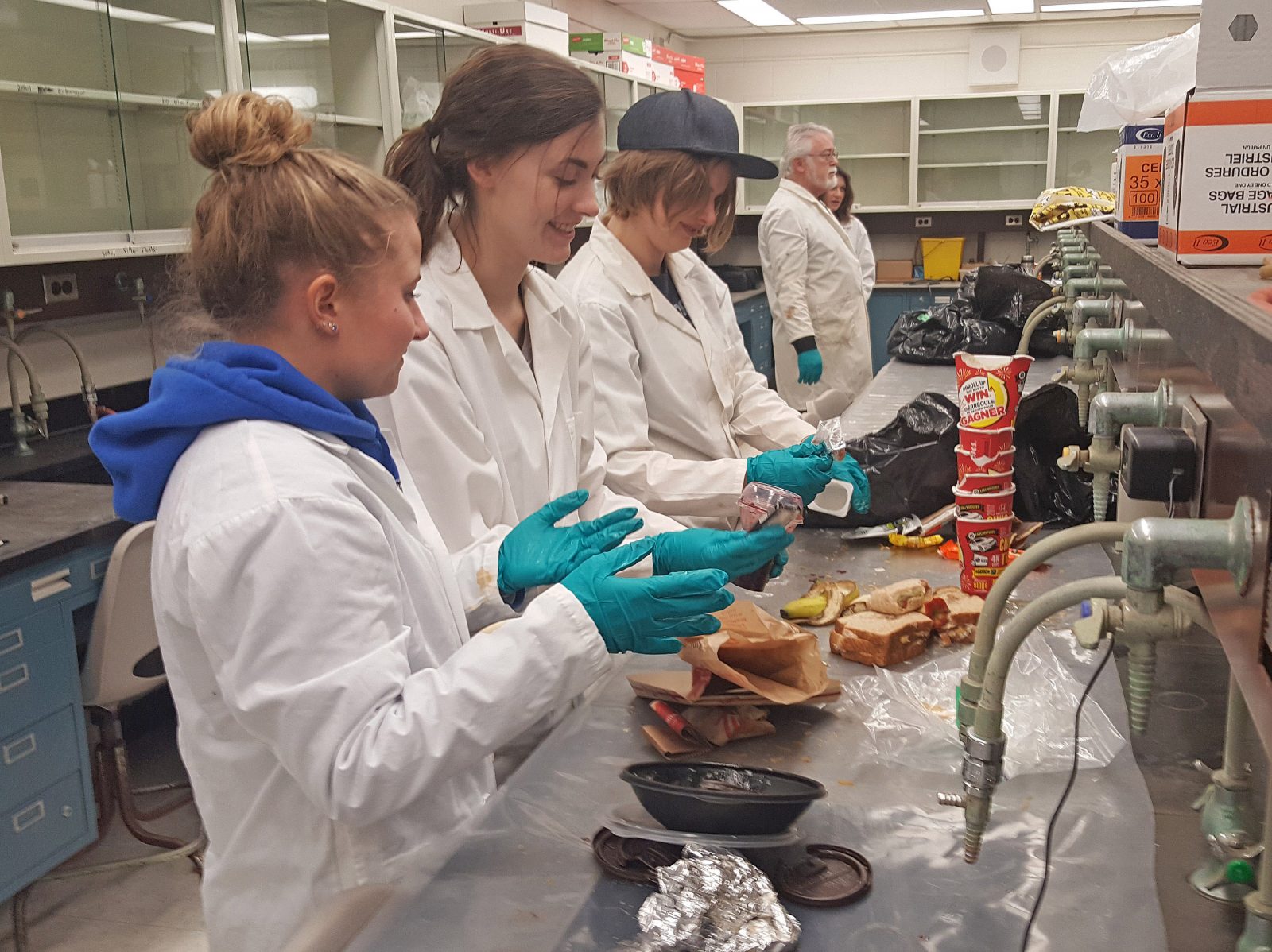 Students from the Advanced Geochemistry class sort through garbage as they complete a waste audit. Pictured from left are: Kayla Wilcox, Emily Ham and Kerry Norman. Professor Uwe Brand is in the background with TA Andrea Krueger.

If the recent Tim Hortons Roll up the Rim contest taught us anything, it’s that the Brock community consumes massive quantities of coffee.

But what happens to those hundreds of coffee cups purchased around campus every single day?

As part of a research project in an Advanced Geochemistry class, students did a waste audit at three locations on the main Brock University campus. A report detailing the findings is being made for Facilities Management, but among the recommendations are the need for more organics bins across campus, and better signage to help avoid confusion over how coffee cups should be disposed of.

The students collected more than 80 bags of waste from the Hungry Badger, Isaac’s Bar & Grill and Mackenzie Chown D-Block. The seven undergrad and three graduate students wanted to see how effective the University is at sorting its waste.

It’s the type of experiential learning project that their teacher, Earth Sciences Professor Uwe Brand, has become known for. 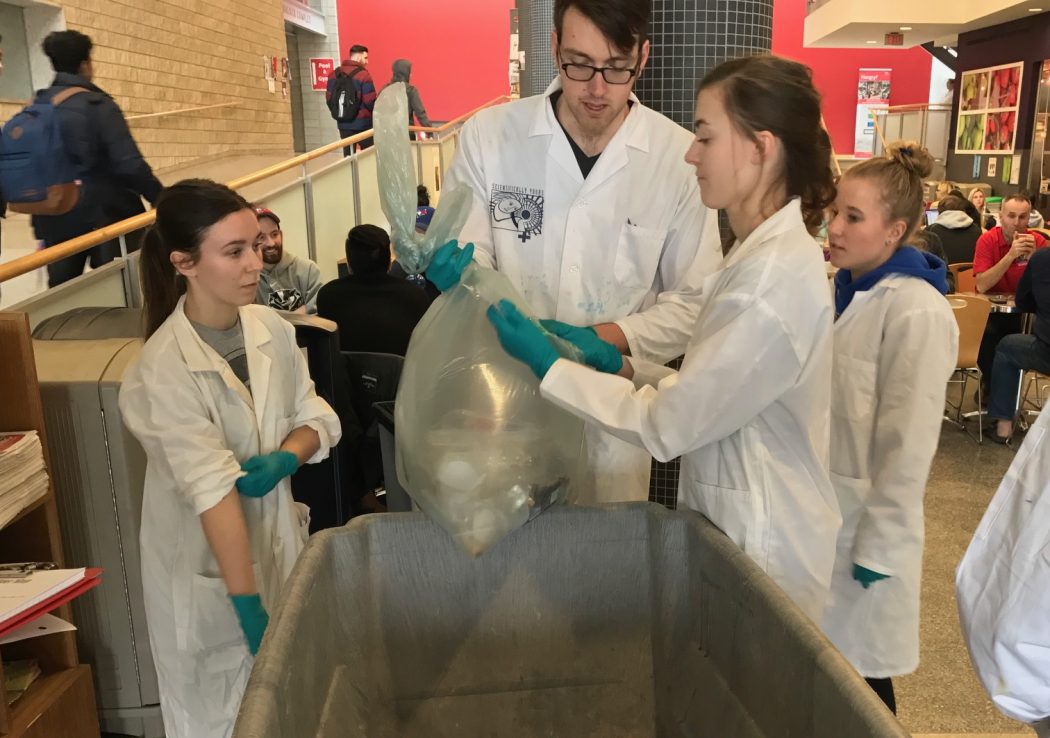 Students from the Advanced Geochemistry class collect garbage from the Hungry Badger for a waste audit research project.

“It’s really interesting to take all these things we learned in the first few years and actually go out and use them,” said Madeline Becker, a fifth-year Environmental Geoscience student.

“It’s not just a theory in front of you. You’re out there in the field doing research, being involved in every step of the process,” said fourth-year Environmental Geoscience student Hayden Polski.

The students collected the contents of recycling (cans, bottles, plastics), paper, garbage and organics bins and then sorted to see what was being put into each.

Overall, the student audit found that 76 per cent of garbage was being diverted, which is even better than the 68.5 per cent an official waste audit found in 2015.

However, after sorting the waste, the students found that while paper and recycling was being disposed of fairly well, about half of what was dropped into garbage bins was compostable organics.

“In some areas we’re doing well, but we could be doing better,” said fourth-year Earth Sciences student TJ Whibbs.

Fourth-year Environmental Geoscience student Emily Ham said the incorrectly sorted waste is likely due to a combination of people not caring enough — “it’s kind of annoying to scrape out the food into organic bins,” she said — as well as a simple lack of organics bins.

The other major issue the class identified was the confusion over coffee cups. Some signs show the cups as being recyclable with paper products, while other bins are specifically identified as being for coffee cups. Then there’s the issue of the Niagara Region not allowing coffee cups to be put into their organics bins.

The students originally thought all coffee cups need to be put into garbage bins, because the Region doesn’t compost them, but Brock Facilities Management staff clarified the issue after learning about the students’ waste audit.

“The students are correct, Niagara Region doesn’t have a recycling program for paper coffee cups, but the University does,” said Custodial and Ground Services Director Domenic Maniccia. “Due to the amount of liquids in our organic material, our organic waste hauler, Davidson Environmental, is able to mix in the paper cups with our organics.”

“The school could use more organic bins. There were tons of coffee cups improperly sorted in the garbage bins when we were looking through them, so there is still the issue of educating students and staff on the proper placement,” she said.

Maniccia agreed, saying that coffee cups alone account for around 36 metric tonnes of waste each year, but only a small percentage of those are deposited into organic or coffee cup-specific bins for composting.

“More organic bins would be useful in collecting not only coffee cups but organic food waste,” he said.