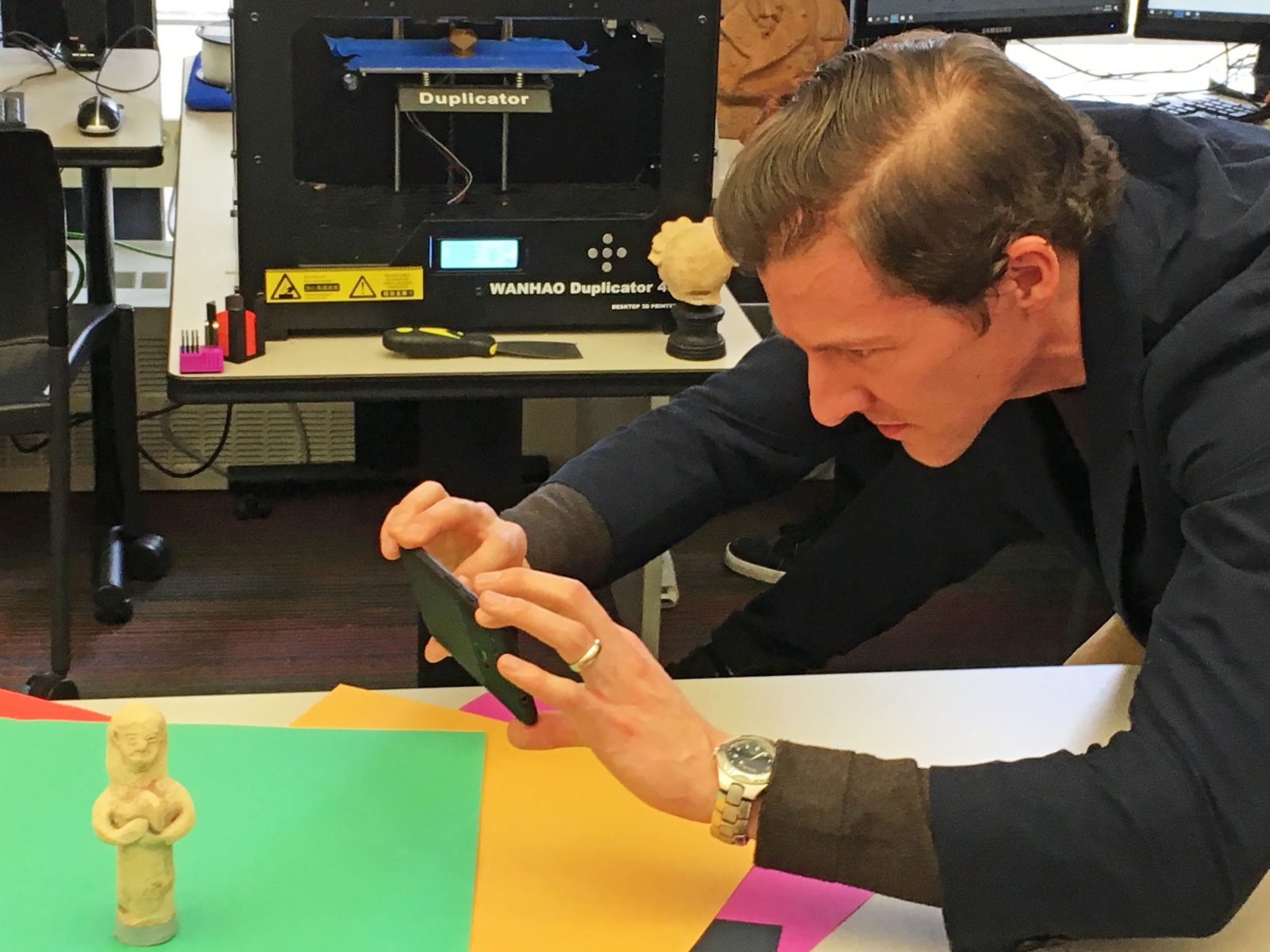 Jonathan Younker, Head of Library Systems and Technology, photographs a figurine from the Department of Classics’ collection of Cypriote artifacts. The figurine was replicated using a 3D printer in Brock’s MakerSpace on Friday, March 31.

A collaboration between the innovative space, which encourages the use of various creative technology tools, and the Department of Classics saw a 3D printer used to replicate a piece of history.

It was Jonathan Younker, Head of Library Systems and Technology, who approached Professor Carrie Murray with the unconventional idea in hopes a partnership could be born.

Murray instantly thought the concept would be an interesting fit for the department’s Cypriote Collection, which includes artifacts from Cyprus’ Neolithic period through to the Middle Ages.

The 3D printer was used Friday to make two copies of a figurine that will be showcased alongside its replicas beginning this week in the department’s display case on the third floor of the International Centre.

The technology has great potential for archaeology students at Brock. 3D printing can allow for hands-on learning in archaeology classes, with students examining replica artifacts for size, production technique and stylistic analysis without risking damage to the original.

“It is also possible that students could design reconstruction models to be printed, such as column capitals, which holds the potential for analysis and interpretation on a different level,” Murray said. 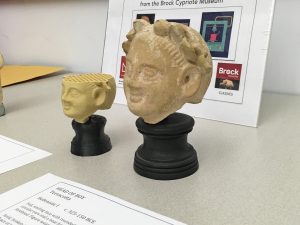 A figurine from the Department of Classics’ collection of Cypriote artifacts was replicated using a 3D printer in Brock’s MakerSpace on Friday, March 31.

3D printing may also allow students to interact with artifacts in museums around the world that could otherwise not be handled or even seen.

“Potentially, artifacts and their 3D buddies can be in more than one place at one time,” Murray said, which would give the public greater access to ancient art.

“In this case, we have a modest example from something we can access relatively easily on campus, but the potential to print something held in a collection elsewhere is exciting.”

The technology is also ideal to use with broken or damaged artifacts.

“A 3D copy would present the advantage of creating a whole figurine that can be examined without fear of causing further damage through handling or using bonding agents,” Murray said.

The Cypriote Collection, housed in the Department of Classics, is a small collection of antiquities that was started in 1970 by Arthur Kahn, then chair of the department. The collection consists of 173 objects acquired through donation and purchase, and includes artifacts dating from Neolithic, Bronze Age, Hellenistic, Roman and Medieval periods.

Artifacts in the collection include stone bowls, bronze daggers, pottery, lamps, glass vessels, sculptures and figurines. A number of artifacts are on permanent display in the department and can be seen during regular university hours on the third floor of the International Centre.

After a successful first run with the technology, Murray said other potential uses for 3D printing within the department are being discussed.