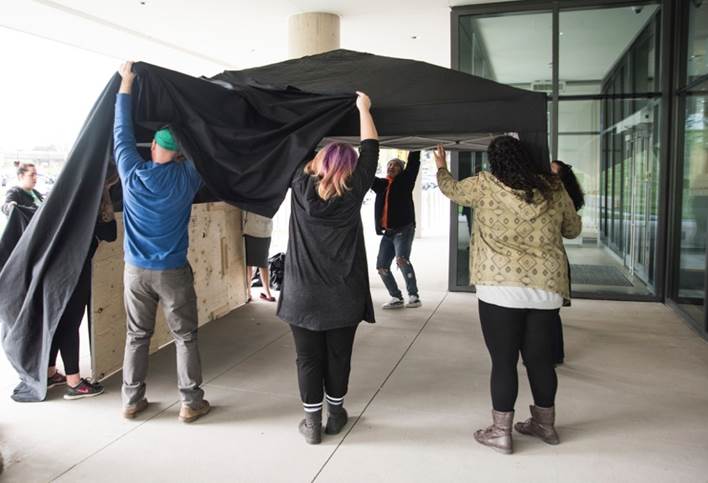 Brock Visual Arts students work to build a camera obscura in front of the Marilyn I. Walker School of Fine and Performing Arts.

Constructing a large outdoor camera has given Brock Visual Arts students a freeze frame of photography techniques of the past.

As part of the Walker Cultural Leader Series, 40 students from Prof. Amy Friend’s Camera and Darkroom Process Photography course and Candace Bodanski’s Baroque Art and Architecture course worked to build a three metre by three metre camera obscura in front of the Marilyn I. Walker School of Fine and Performing Arts in downtown St. Catharines

The camera obscura gave students an opportunity to experience an early form of photograph making.

“Their interactions with the structure coerced new methodologies and much trial and error to achieve a successful photograph,” Friend says.

After working with New York artist Liz Sales and Friend to build the camera, the students used it for about a month to produce photographs.

The result is a new exhibit at the downtown Brock opening Thursday, Nov. 24.

The term camera obscura was coined in the early 17th century and means “a darkened room.” The device works on similar principles to a pinhole camera. A dark room or tent with a small hole in one side allows light to pass into the darkened space and create an image of an object. This image can be captured on photographic paper or by drawing.

Making the structure light-tight was a challenge, requiring students to hand stitch the black-out material directly onto the structure so wind couldn’t lift the fabric and allow light to leak in and interfere with the exposure of the silver gelatin paper during production.

Friend said that she witnessed some hesitancy with the new structure at first, as it disrupts modern understanding of what a photographic capture is.

“As a practitioner,” she said, “I love that reaching into the vaults of history reveals new ways of seeing and thinking. Students pushed their experiments with impressive results.”

Other Brock Visual Arts classes also interacted with the camera obscura while two high school classes visited the project and attended a workshop with Sales and Friend in which they engaged with the camera and darkroom facilities to produce photographs.

In Light and Darkness: A Camera Obscura Project with Artist Liz Sales and Brock Visual Arts Students runs until Dec. 9 in the MIWSFPA Art Gallery, and also features work from Sales’ own camera obscura series The Weather Inside. An opening reception and artist talk by Sales will be held Thursday, Nov. 24 from 6-7 p.m. in MW151 at the downtown campus.