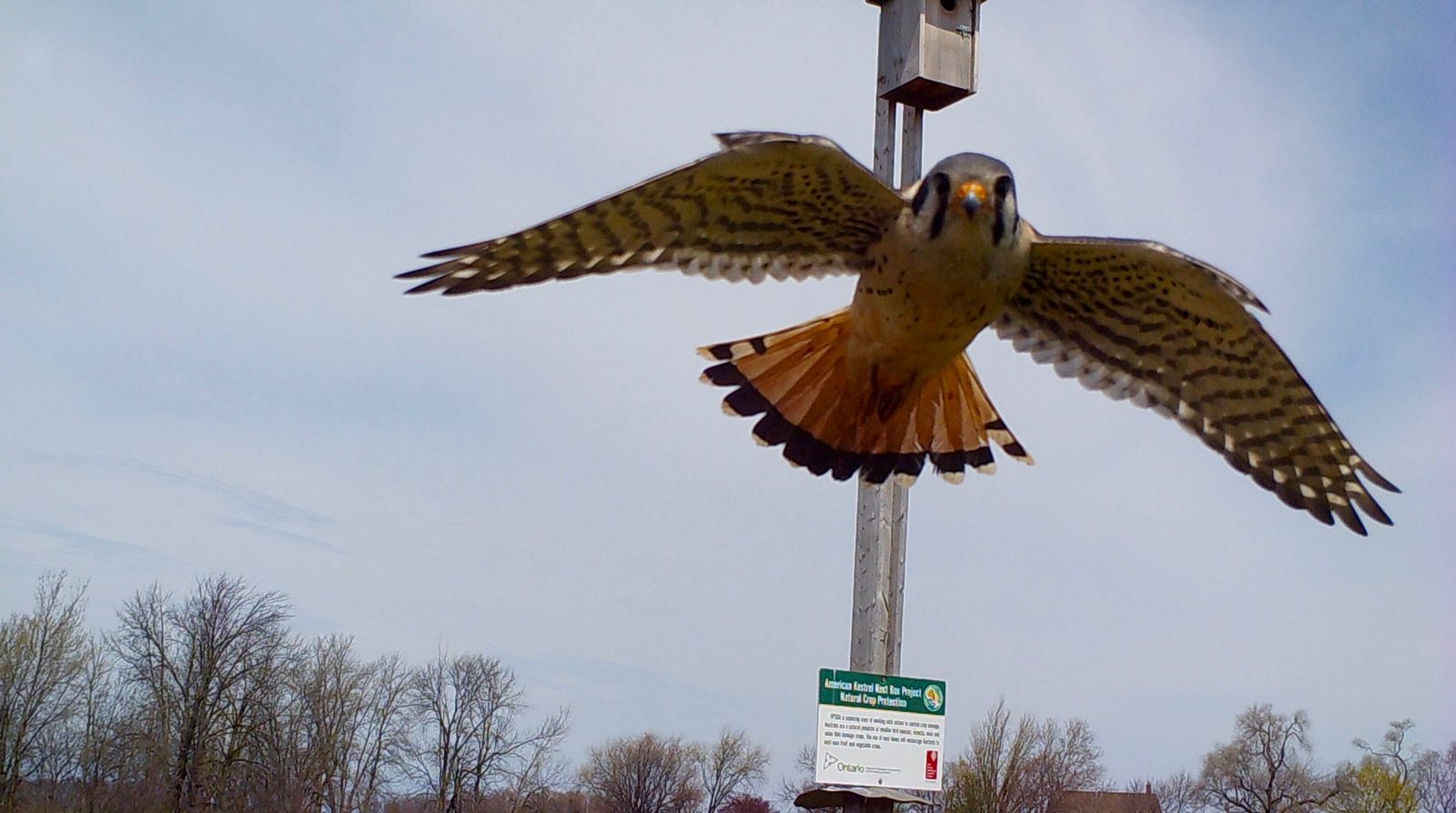 Farmer's friend: A kestrel leaves its nesting box at one of the research trial sites.

A project involving Brock University researchers — in which kestrels protect orchards and vineyards from fruit-eating birds — has won a prestigious award from the Ontario government.

Each year Ontario growers lose more than $24-million worth of fruit to wild birds. Seeking ways to protect crops, the Ontario Fruit and Vegetable Growers’ Association (OFVGA) partnered with Brock researchers to install nesting boxes for the American kestrel near orchards and corn fields.

Researchers hit on the idea because these birds of prey feed on smaller bird species as well as insects, mice and voles. Plus, notoriously territorial kestrels drive other birds out of their territory, which could be more than a kilometer in range.

The low-cost approach seems to be working, as nuisance bird populations dropped 20 to 30 per cent in places where nesting boxes were installed. And besides enjoying bigger harvests, farmers can also feel good about helping reverse the decline of kestrels in Ontario.

The clever initiative has been selected for a Regional Premier’s Award for Agri-Food Innovation Excellence, which recognizes the innovative contributions of the research.

Researcher Jim Willwerth, a viticulturist with Brock’s Cool Climate Oenology and Viticulture Institute (CCOVI), has been working on the file for four growing seasons. He and technician Mary Jasinski have monitored bird pressure, deterrent methods and bird damage at trial sites.

“This award recognizes OFVGA’s commitment to research new ways to reduce crop loss in agriculture,” said Willwerth, “and demonstrates how strong partnerships between industry and research institutions such as Brock can produce innovative solutions.”

Willwerth said many bird deterrents have mixed results. Methods like bird bangers make for poor relations with neighbours, while netting is cumbersome, costly and difficult to remove when growers need to harvest quickly. And as birds become accustomed to different deterrence methods, they become less effective over time.

“This project has been a true collaborative effort with Jim and Mary from Brock conducting the research,” said Meaford, Ont. apple grower and OFVGA member Brian Gilroy. “For fruit and vegetable farmers, predators are challenging to deal with and we greatly appreciate the relationship we have developed between OFVGA and Brock University.”

The OFVGA plans to invest the award’s $5,000 prize back into bird deterrent research at Brock. Having been  recognized with the regional award, the project is now up for consideration for one of the province’s five grand prize agri-innovation awards.

The OFVGA’s Susan Fitzgerald, the project coordinator, called the kestrel initiative a natural approach to what has been a stubborn problem.

“Crop losses and damage can be very frustrating and disheartening to growers,” she said, “especially in crops where margins are already slim.”

In addition to grapes, the research team is examining the effectiveness of this deterrent strategy in other fruit crops including cherries and blueberries. Trial sites are located across Niagara and Norfolk County.