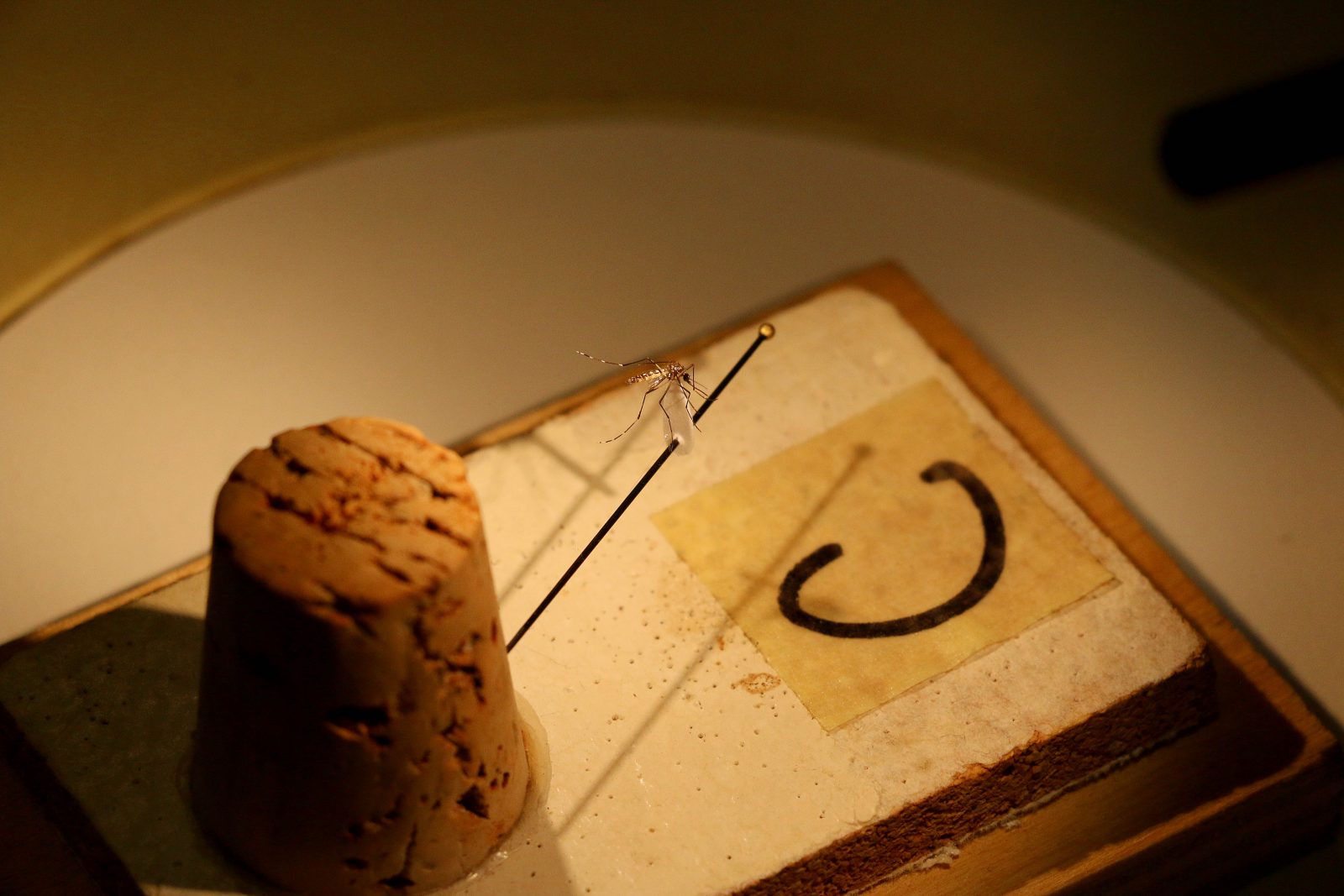 This sample of the Aedes aegypti mosquito species was on display Friday during a press conference at Brock University in St. Catharines. The species was found in Windsor in dumped trash, specifically a syrofoam food container. The three mosquitoes tested negative for Zika virus.

Brock University scientists found what are believed to be the first Aedes aegypti mosquitoes in Canada during surveillance in Windsor.

The species, commonly known as the yellow fever mosquito, is responsible for the majority of human cases of Zika virus infections in the Caribbean, South America and Florida. Three Aedes aegypti mosquitoes were collected in Windsor earlier this month during enhanced surveillance activities following the recent discovery of another invasive species, Aedes albopictus.

The discovery was made by a team from Brock University, Public Health Ontario, Entomogen Inc. and the Windsor-Essex County Health Unit.

Bryan Giordano, PhD candidate in the Centre for Biotechnology at Brock, tested the three Aedes aegypti mosquitoes in Brock’s CL3 laboratory and all tested negative for Zika.

The discovery of Aedes aegypti is believed to be the first time the species has been found in Canada.

Giordano said the specimens were found in garbage, specifically in a discarded Styrofoam container.

“This is the species of major concern world wide as the vector for Zika virus,” Hunter said during a press conference held at Brock Friday afternoon.

She said if there are more Aedes aegypti in Windsor, they will be killed off in the winter.

“They are not cold hardy in the least,” she said.

Hunter said surveillance for these mosquitoes will continue and researchers will start using both CDC light traps and a new trap that provides more darkness and uses human flesh to lure the pests.

“This is something of concern so we are keeping an eye on it,” she said.

Hunter said finding these two species so far north is not believed to be a threat to human health.

She said because Aedes albopictus is more adaptable to cold, the biggest threat is whether that species can establish this far north. It is believed to be a potential vector for Zika virus. However, she said without a population of infected people, it’s unlikely the species will cause an outbreak in the near future.

Hunter said finding these species was a surprise for researchers.

“I always thought we’d get albopictus here but never in a million years did I think we’d find Aedes aegypti,” she said. “It was a huge surprise but it’s also frightening.”

It is believed both types of mosquitoes came into Canada due to human activity.

Although it is unknown exactly how the larvae arrived in Ontario, one possibility is that the eggs were transported from the U.S. in shipping containers or other cross-border vehicle traffic. Aedes aegypti eggs could also have been imported in recycled products, such as tires or other containers, Windsor-Essex Public Health said.

Giordano, who specializes in range expansion and Zika virus, is working to trace the origins of the mosquitoes found in Windsor.

“We have access to an entire world of knowledge,” he said in discussing the database that contains samples of mosquito DNA from around the globe.

He is going to sequence the genes of the mosquitoes found in Windsor to try and determine where they came from.

In the United States, the Aedes aegypti mosquito primarily exists in the southern states and along the eastern seaboard, where temperatures are more favourable for its survival.

The Windsor-Essex health unit said the biting behaviour of Aedes aegypti is different than those that transmit West Nile Virus in Ontario. It is a sneaky, human, daytime biter; it tends to approach humans from behind and bite them on the elbows and ankles. Like Aedes albopictus, these mosquitoes do not breed in ponds, puddles or marshes. They typically lay eggs in and near standing water in items such as buckets, bowls, animal dishes, flower pots and vases. It is important to change water regularly, especially in pet dishes and water in bird baths.