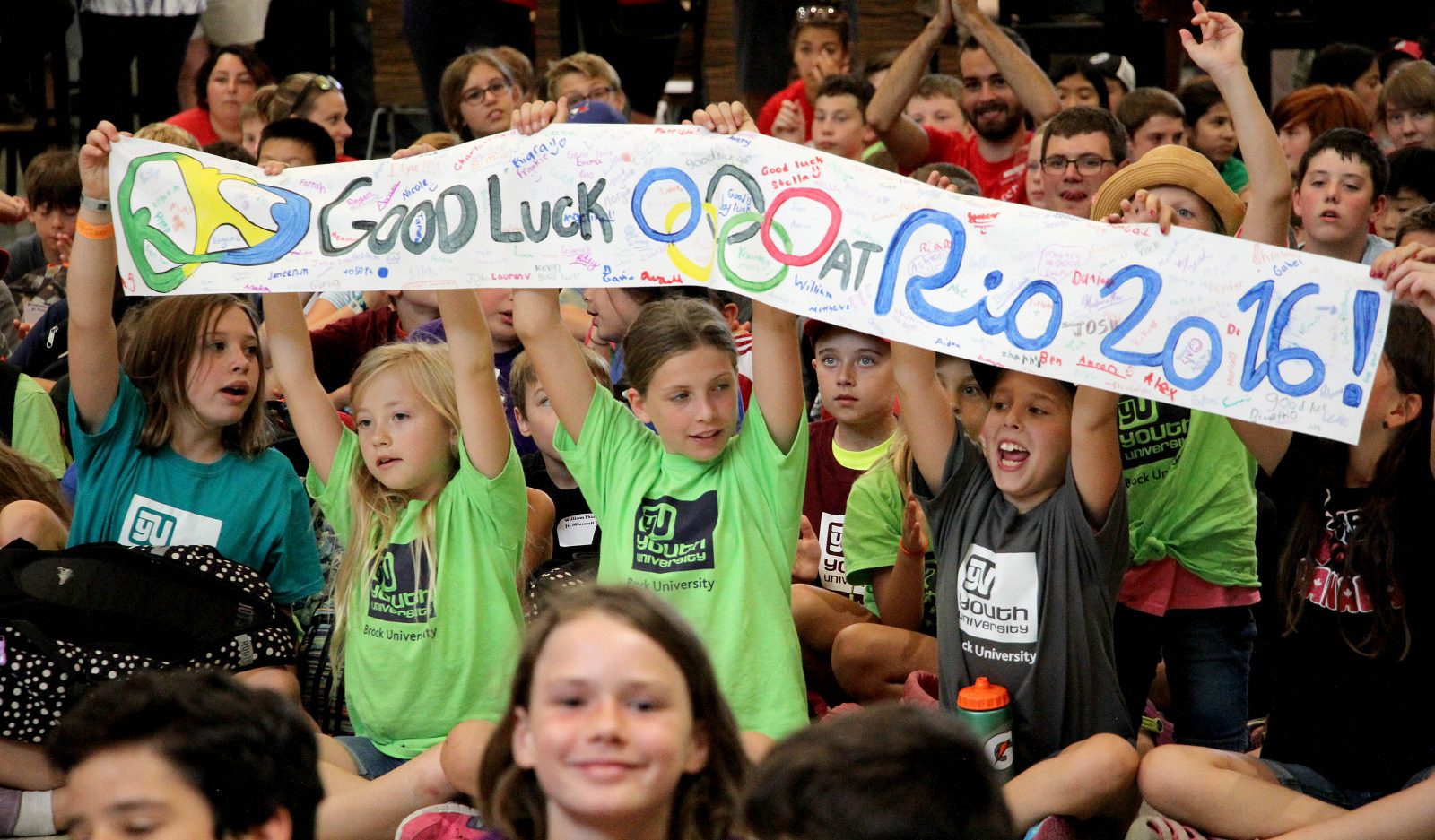 Michelle Fazzari has spent the past 11 years training for her Olympic dream. In two weeks, it becomes a reality for the Brock University wrestler and alumna when she competes at the Olympic Games in Rio de Janeiro.

The hard work, dedication and sacrifice of the six athletes and two coaches going to Rio – who are either current or former students, athletes or coaches – was recognized Tuesday during a send off celebration in Market Hall.

Cheering, clapping and chanting could be heard around Brock as hundreds of Youth University participants, sports campers, staff and faculty gathered to offer congratulations and encouragement.

Fazzari said the outpouring of support from the Brock community means a lot to her as she prepares to head to Rio and compete on Aug. 17.

That community atmosphere is what drew her to Brock’s wrestling team.

“We are a really tight-knit group. It’s such a talented, supportive group of people from the coaching staff to the athletes,” she said. “We are such a family and that cohesion really shows through our performance. We support each other.”

Paralympian Jessica Lewis, a Brock student who is competing in track for Bermuda, was beaming during the send-off party.

She said it means a lot that so many people are rooting for her to succeed in Rio.

“I’m so grateful for all the support Brock has been giving me,” she said.

Lewis made history when she won a gold medal at the 2015 Parapan Am Games in Toronto, becoming the first person from Bermuda to ever medal at an international games. Now she’ll try to win her home country’s first-ever Paralympic medal when she races in the track events in Rio in September.

Brock wrestler Jillian Gallays, from Saskatoon, encouraged the youth gathered to follow their dreams and remember that even when you are doing something you love, there are days when you will feel discouraged. She told them not to give up.

It’s advice she’s taken as she works towards her dream of winning Olympic gold.

“Regardless of the outcome, I’m so proud and happy with my journey,” she said. “I’m so thankful I moved to Brock.”
Gallays relocated to St. Catharines to train at Brock with coach Marty Calder.

“Brock has brought my skill level up and my technique level has increased so much,” she said.

Calder is headed to his seventh Olympic Games. He competed as a wrestler in two games, starting in 1992, and this will be his fifth Olympics as a coach.

He said it really is the culmination of years of dedication and hard work.

“When you become an Olympian, it’s after years and years of training and competing,” he said.

He added that competition at that level also involves a mental game. Athletes have to be well-rounded and able to handle the pressure while performing physically at an elite level. Joining him in Rio will be three-time Olympic medalist and coach Tonya Verbeek.

Acting President Brian Hutchings talked about the perseverance it takes for athletes to make it to the level of the Olympic and Paralympic games. He said they are excellent examples of what it takes to succeed in sport.

Brock rowing head coach Peter Somerwil said alumni rowers Eric Woelfl, who graduated in 2012, and Tim Schrijver, a 2015 graduate, will represent Canada at the games. They are already in Brazil for the games, which kick off with an opening ceremony Friday.

Also heading to Rio are Jasmine Mian, a 2011 Brock Graduate and former Badgers wrestler who now lives and trains in Calgary, and Terry Paul, who earned his degree from Brock in the 80s will coach the Canadian men’s quad rowing team.