20 years later: A grape and wine research success story made in Canada 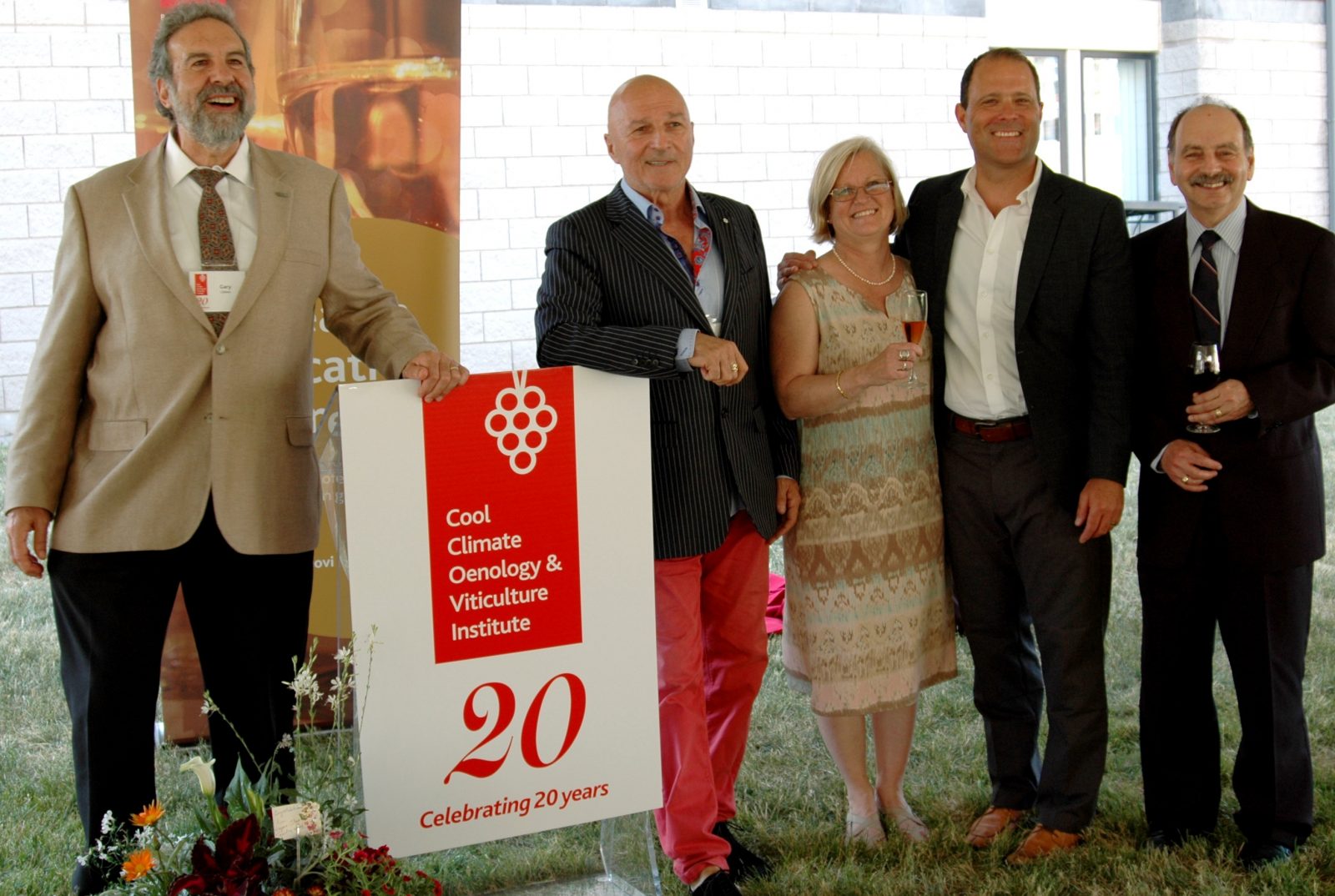 Under a marquee tent at Brock University, about 100 researchers, grape and wine industry leaders and friends gathered Friday (June 24) to sip wine and celebrate a milestone birthday.

Two decades ago, Brock created its Cool Climate Oenology and Viticulture Institute, supported by the Wine Council of Ontario and the Grape Growers of Ontario.

On Friday, some of the original architects of Canada’s renowned grape and wine research unit were back for the party, mingling with the current generation of vintners and celebrating the institute they all know as CCOVI.

The mood was relaxed as revelers toasted the success of CCOVI — with Canadian wine, of course — and remarked over how impactful the institute has become since being devised by a group of professors, grape growers and winemakers in a hotel meeting room 20 years ago.

“Those pioneers determined to make it happen,” said Lightstone. “Because of your work, we hit on the model of how Brock should organize research at our university.”

“They initiated it,” Ziraldo recalled, “they were the ones who approached us. And look what happened as a result. The industry needs to continue supporting this, because without the research, we won’t get very far trying to move forward.”

CCOVI Director Debbie Inglis, herself a grape farmer as well as a CCOVI scientist, said the institute proves the value of collaboration between industry and academia.

“The best is yet to come,” said Inglis.

What began in 1996 as a single science lab (CCOVI didn’t have its own building until 1999) is today an internationally-recognized centre of experts whose work priority is determined by the grape and wine industry’s most pressing needs.

Last year, an independent study determined that CCOVI contributed more than $91-million and the equivalent of 307 jobs to Ontario’s economy in 2014-15.

Public outreach and industry engagement have remained central to its DNA. For example:

But no such support structure existed before the mid-1990s, when a group of 37 people who became known as the Queen’s Landing Forum began meeting to discuss how to address the needs of Canada’s rapidly expanding grape and wine industry. The dialogue saw leaders from Brock University, located in the heart of Niagara grape and wine country, brainstorming alongside industry figures like Ziraldo, Paul Bosc, Howard Staff, John Howard, Karl Kaiser and others.

Canadian wine writer Linda Bramble was in the room in ’96. She recalls Bill Cade, then Brock’s Dean of Mathematics and Science, as “the real driving force” who brought in the wine industry leaders and grape growers.

“Cade was very careful to get community buy-in,” says Bramble. “His energy and enthusiasm was contagious. I remember being split into groups to discuss specific questions and reporting back. The air was filled with possibility.

“I remember Donald (Ziraldo) repeating, ‘Every significant wine region in the world has a research institute associated with it.  We need this, too!’  The vision was local as well as global, since it was seen as focusing on cool climate research rather than depending on the research that came out of California or Bordeaux, or even northern Italy.

“This was to be our niche: Advance the local industry, yet have a global reach.”

By October 1996, Brock officially created the institute that would focus on the needs of the grape and wine industry and the continuing education of the community.

Its role has steadily grown. In 1999 CCOVI moved into the new Inniskillin Hall, which was built largely because Ziraldo and John Howard led a $2.1-million fundraising campaign from members of the grape and wine industry across Canada.

Through the intervening years, governments and industry have contributed millions of dollars in research funding, and CCOVI has helped form a national network of industry support groups from BC’s Okanagan Valley to Nova Scotia.

Last month CCOVI helped fuse a national effort that travelled to the UK and resulted in Canada being chosen to host the 2020 International Cool Climate Wine Symposium, one of the world’s most prestigious wine conferences, for which Brock will be the host site.

On Friday, during the 20th birthday party, Director Inglis said the CCOVI story illustrates what can happen when a university collaborates with industry and government.

“People work together, problems get solved and great things are achieved,” said Inglis. “We look look forward to continuing with these partnerships and further expanding the impact all across Canada.” 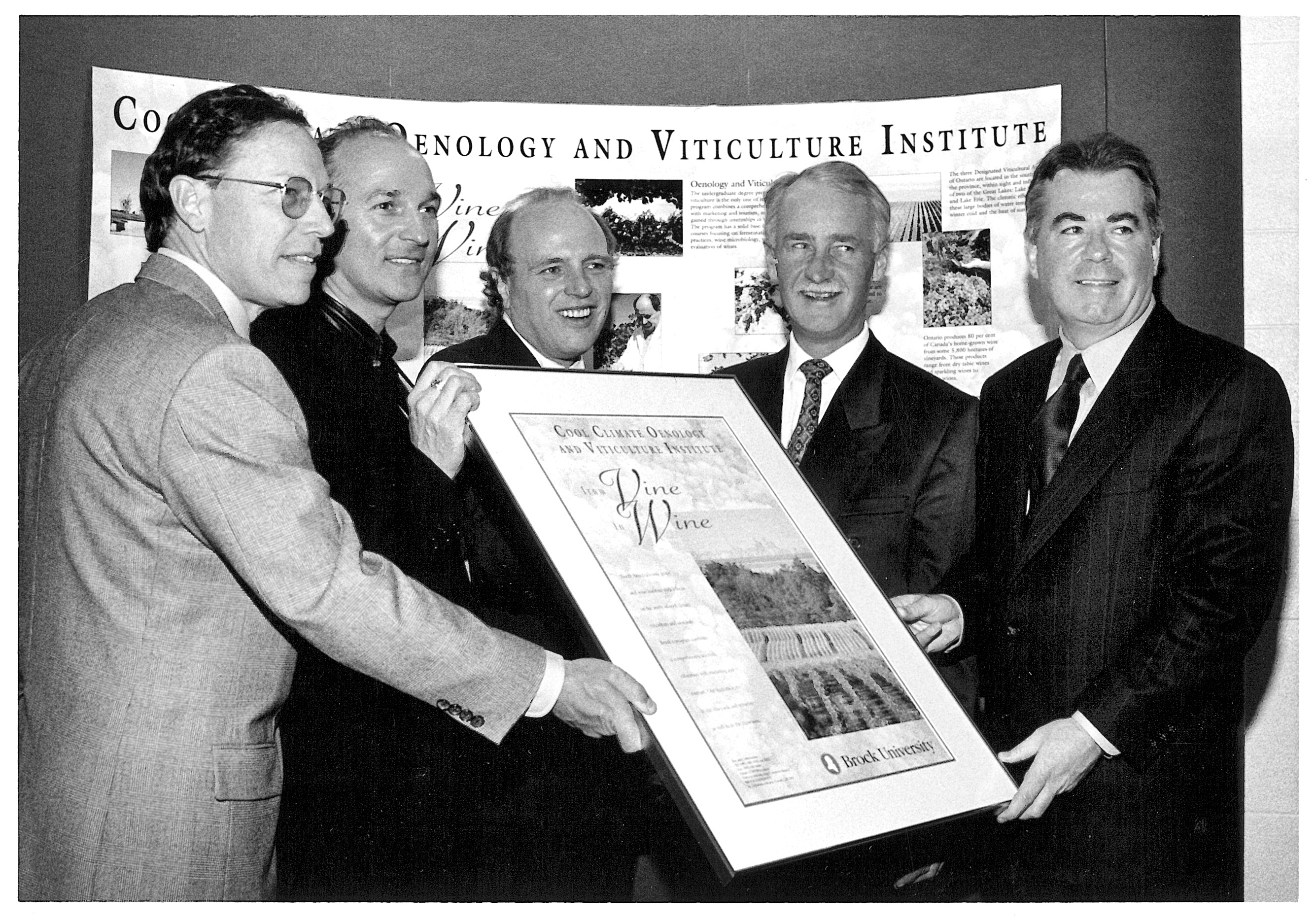