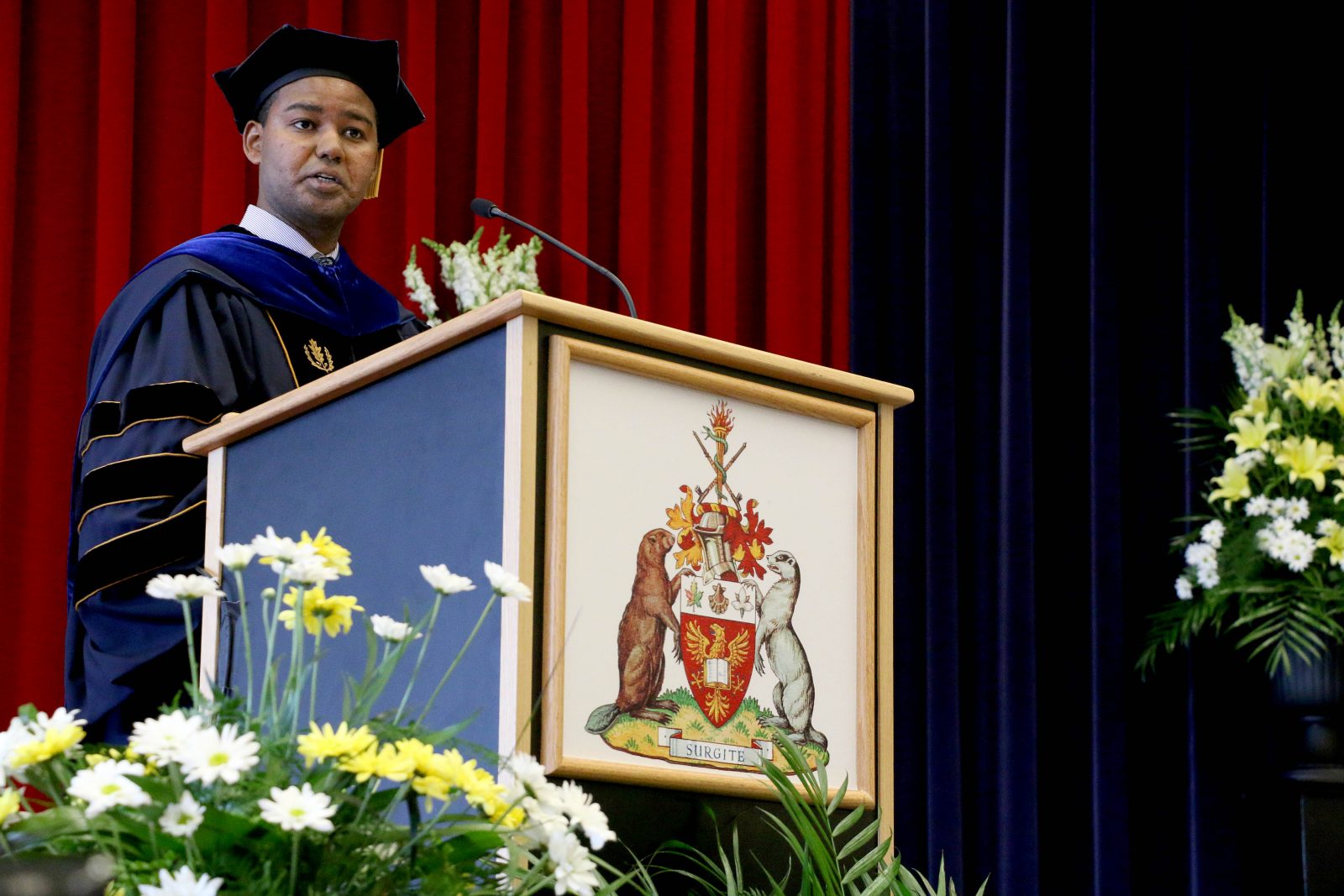 Professor Anteneh Ayanso from the Goodman School of Business gave the morning convocation speech Thursday after being awarded the Faculty Award for Excellence in Teaching.

Ayanso, an associate professor of Information Systems in Brock’s Goodman School of Business, was the recipient of the Faculty Award for Excellence in Teaching and delivered the morning convocation address.

In the crowd were Ayanso’s wife Yemisrach Hailemariam and his two children Yonathan, 9, and Beza, 11.

“We made the difficult decision to keep them out of school today because there’s a bigger lesson to be learned,” he told the graduates. “Watching you watching me will teach them the passion for learning.”

Born and educated in Ethiopia, Ayanso got his first job in teaching two days after graduating from a university there.

“Imagine if your first swimming experience took place in an ocean. That’s how I started teaching. I was too young and naïve,” he said.

After his first two-hour lesson, Ayanso said he felt exhausted and out of place.

“It felt like I was coming out of a failed combat mission,” he said.

But those challenging early years taught him an important lesson.

“Great opportunities always come with difficult challenges. Those five years of teaching experience without a graduate degree were difficult.”

Ayanso told the Goodman School of Business graduates that passion for what they pursue in life will help them through those tough times.

“As I look back at my life, the tasks that taught me the most are the ones that challenged me the most.”

Ayanso has been instrumental in developing programming for an undergraduate concentration in Information Systems and a Master of Business Administration (MBA) specialization in Business Analytics — one of the first programs of its kind in Canada. He has been credited with instilling a love of learning and curiosity in his students. In April, he was chosen by Goodman students as Graduate Professor of the Year. 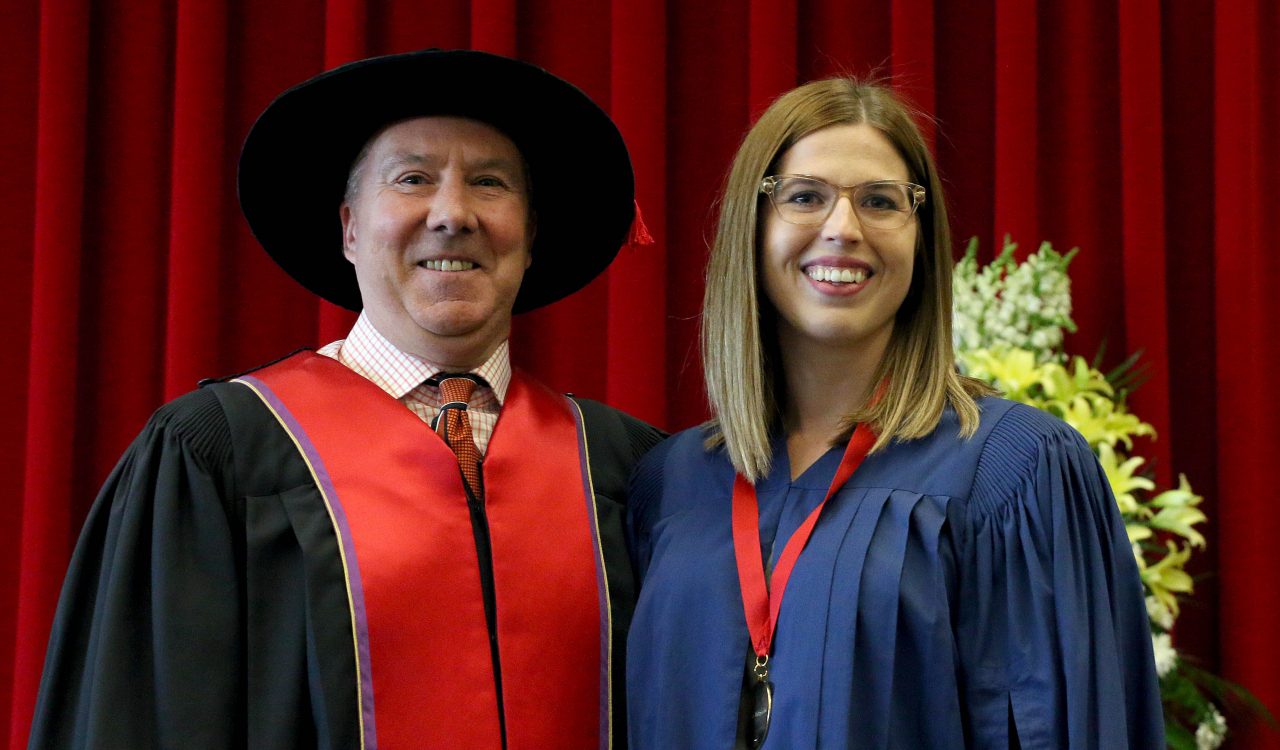 “I’ve actually had my eye on it since I graduated from Brock in 2013,” she said. “It’s been my goal to achieve that.”

After seven years at Brock, Fitzgerald said she looks back with gratitude.

“My professors have made an investment in me, not just as a student but as a person,” she said. “I’ve been able to grow a lot academically, professionally and personally.”
Fitzgerald has always felt that her professors care, in the classroom and beyond.

“I’ve been mentored in a variety of ways,” she said.

During her time at Brock, Fitzgerald was involved in on-campus activities including as vice-president of Internal Affairs on the Graduate Business Council, leader of the charity committee for the Goodman MBA Games team and as a co-op student mentor.

She has received a number of awards including the Co-op Student of the Year, the Jane M. Klausman Women in Business Scholarship, the Graduate Teaching Assistant Award and was selected to attend the Beta Gamma Sigma Honour Society Global Leadership event in Florida.

Jennifer Philpott was the recipient of the undergraduate Spirit of Brock award, recognizing her leadership.

She is known as an exemplary ambassador of the Goodman School and is often asked to speak to prospective students as well as promote the Goodman exchange program to business and accounting students. 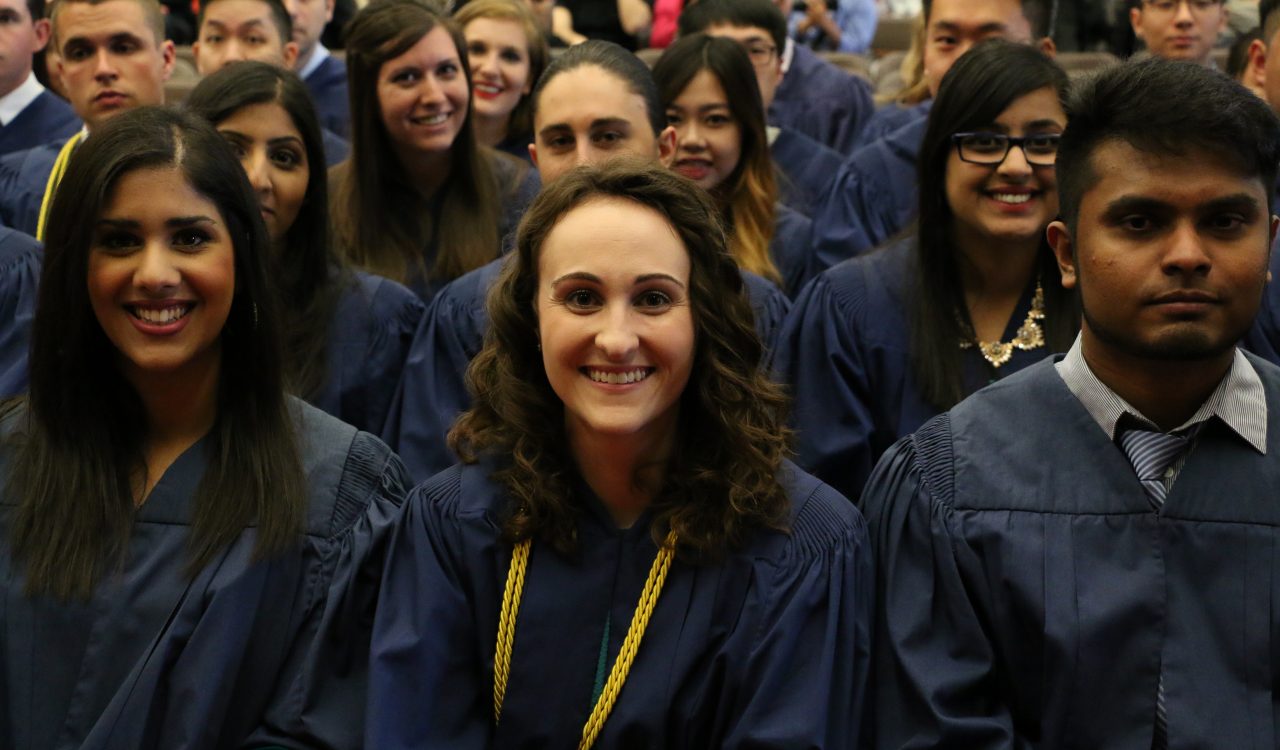 Jennifer Philpott, middle, won the undergraduate Board of Trustees Spirit of Brock award at the Goodman School of Business convocation Thursday.

Philpott has received the Co-op Student of the Year Award, the Jane M. Klausman Women in Business Scholarship and many awards with Goodman DECA.

The Dean’s Medal was given to Chun Yu Lao and the President’s Surgite Award recipient was Thomas Francescutti.

The final Convocation speaker of the day was Goodman School of Business grad Jason Sparaga (BBA ’93) who delivered a light-hearted but advice-filled message.

He said the most important tip for graduates to remember is to be themselves.

“That must be your one constant You’re going to have a lot of people coming at you in the next little while asking you to make some tough decisions, and fast,” he said. “You do you better than anyone else does. And if things go sideways, remember things are never as bad or as good as they seem.”

Sparaga is co-Founder and co-CEO of Spark Power Corp, a company he launched along with his partner Andrew Clark in 2009. He was named the Goodman School of Business Distinguished Graduate in 2015. A Chartered Professional Accountant, Sparaga is an authority on entrepreneurship, finance and corporate growth in the renewable energy and power sectors.


The two Goodman School of Business ceremonies can be watched in full below: