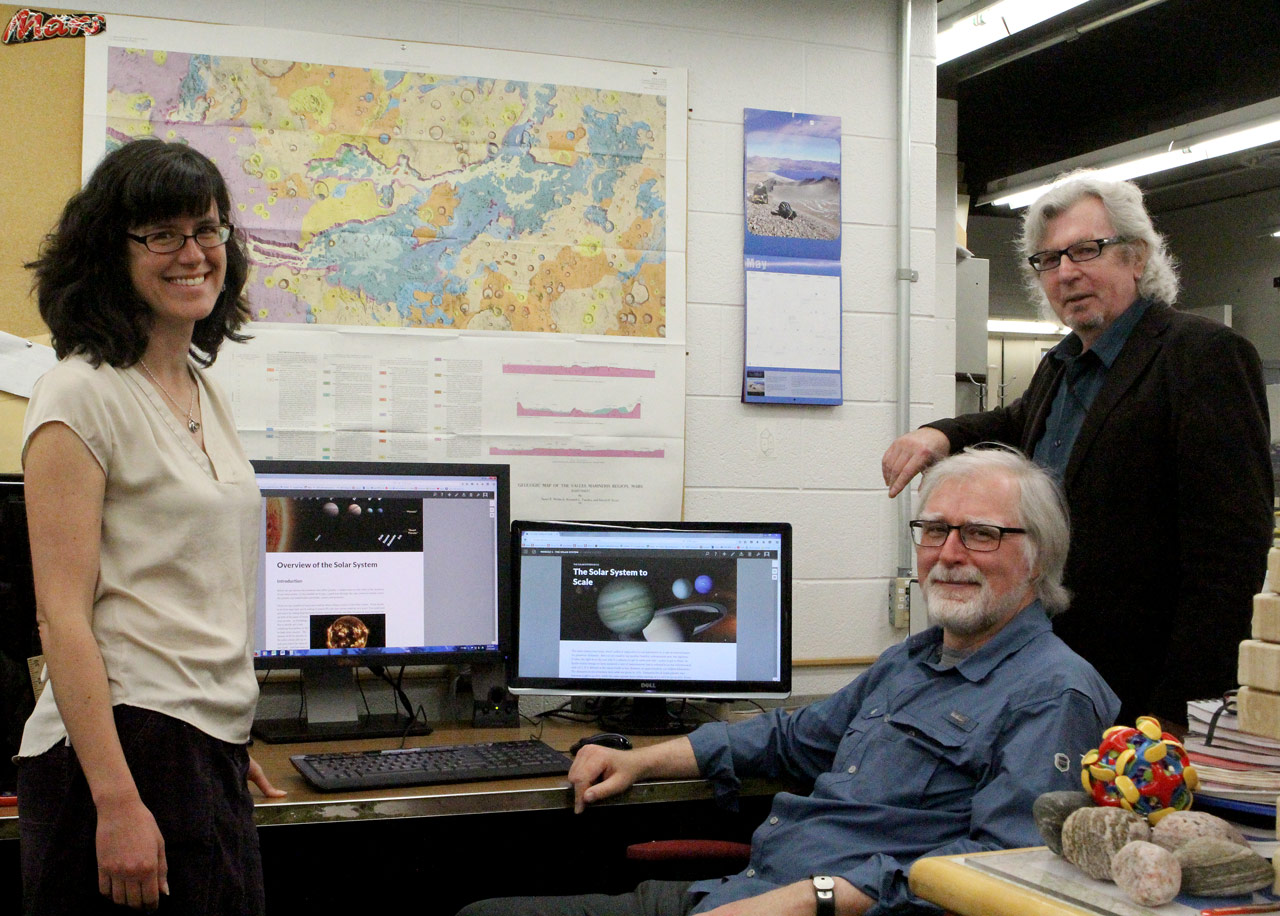 Earth Sciences professors Mariek Schmidt, Frank Fueten and Rick Cheel are bringing their passion for the solar system to students through a new online course they are developing called Planetary Science.

The half-credit science context course – ERSC 1P94 – is aimed at students who don’t have a background in science.

“We are making the content accessible to the audience without bogging them down with scientific bafflegab,” said Fueten, a structural geologist who works on Mars projects. “The reality is a lot of scientific concepts can be explained in plain language.”

Schmidt, a volcanologist and igneous petrologist who has made headlines for her continued work on NASA’s Mars Rover mission Curiosity, said the course covers everything from planets and planetary bodies to the formation of planets and the characteristics of their surfaces.

“The course will include the form water takes around the solar system and wraps up with the search for life and the future of planetary exploration,” she said.
Cheel, who specializes in clastic sedimentology, said students will benefit from having three professors working with them.

“We each have expertise to bring to the table,” he said.

We are really in a golden age of space exploration. There have been so many cool missions recently.

Students can expect some science-fiction movie references peppered through the curriculum, which is delivered entirely online and includes reading modules, quizzes and assignments.

“We try to make it fun by making pop culture references,” Schmidt said, noting students seem to respond to movie references, such as to Wolverine or The Princess Bride in her other courses.

All three scientists said it’s an amazing time to be studying space.

“We are really in a golden age of space exploration,” Fueten said. “There have been so many cool missions recently.”

Cheel agreed, adding that “the whole solar system has opened up.”
Missions including Curiosity to Mars, New Horizons: The first mission to Pluto, the Dawn Mission to the dwarf planet Ceres and the Rosetta mission to catch a comet are a few of the recent NASA endeavours resulting in a broadened understanding of the solar system, they said.

The three scientists said wanting to know about what’s beyond our planet is part of the human journey.

“Humans want to know what’s beyond the next horizon. As a species we’ve always been driven to explore,” Schmidt said.

She said there are many, varied reasons why understanding the solar system is important.

Fueten agreed, adding: “You should be aware of where you live. You care about what happens down the street, this is just a bigger neighbourhood.”

The course starts in July and is filling up fast. For more information visit https://brocku.ca/springsummer/courses/planetary-science/