Co-op Student of the Year named 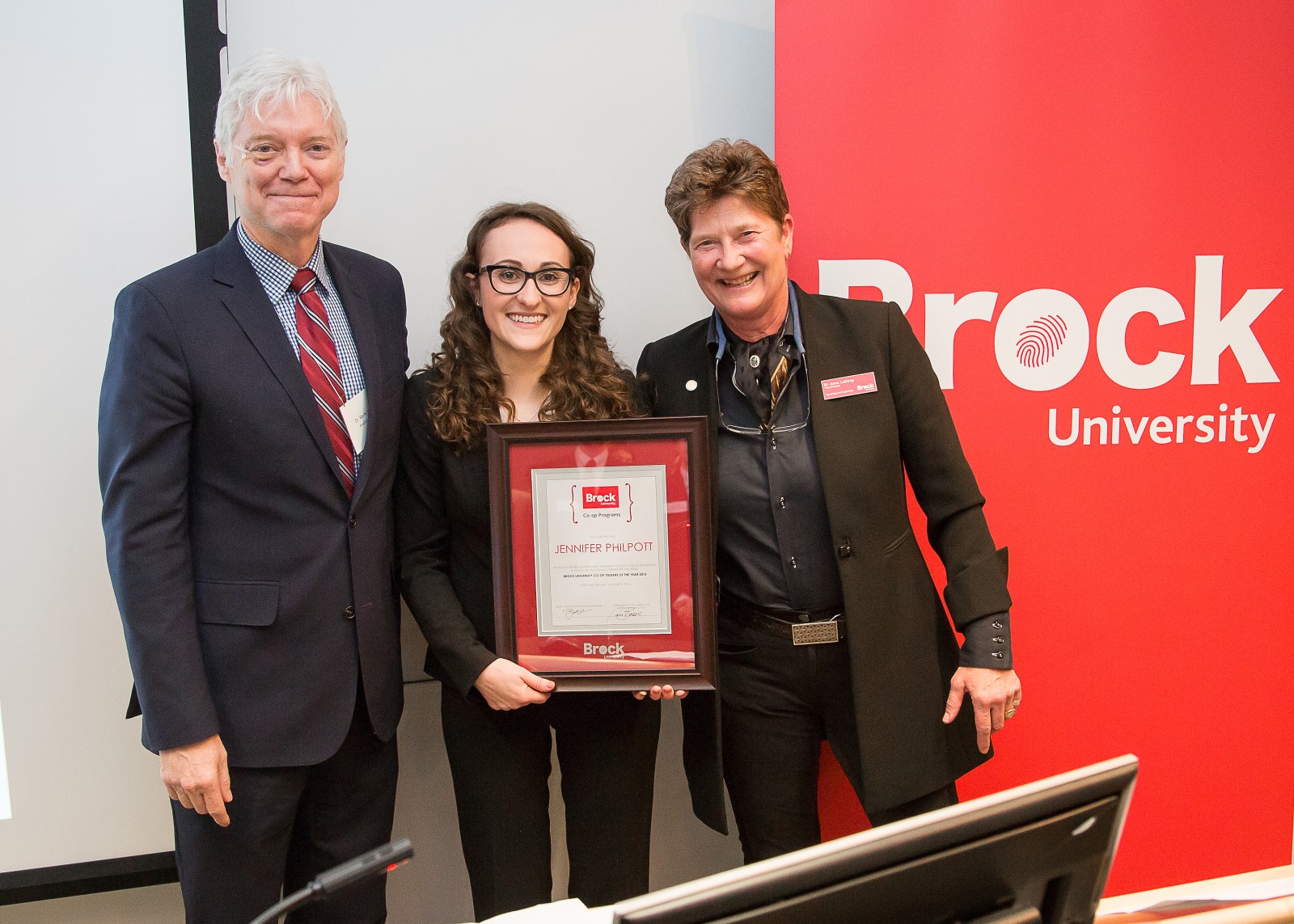 Jennifer Philpott, middle, received the Co-op Student of the Year Award for 2015 from Interim Dean of the Goodman School of Business Barry Wright and Vice-Provost of Teaching and Learning Anna Lathrop.

Brock University student Jennifer Philpott has been named 2015 Co-op Student of the Year.

Philpott is in her fifth year of the honours bachelor of business administration co-op program and has completed three cooperative education terms in the private and public sectors.

“Being recognized as Brock’s Co-op Student of the Year represents the culmination of what has been the highlight of my education at Brock University,” Philpott said. “Participating in co-op has influenced my career development, complemented my academic experience, and furthered my personal growth.”

Philpott’s co-op placements included working as a digital marketing coordinator at Canadian Tire Corporation in 2013, project assistant in the Goodman School of Business in 2014 and junior communications coordinator at the Ministry of Transportation of Ontario in 2015.

“Jennifer has also demonstrated outstanding leadership during her time at Brock and has been a beacon for other co-op students,” said Anna Lathrop, Vice-Provost of Teaching and Learning. “She has been involved in mentoring junior co-op students, speaking on Brock’s behalf at Ontario Universities Fair, Brock Open Houses and much more.”

Lathrop said Philpott’s first co-op work term experience at Canadian Tire directly contributed to her success in the category of Retail Management at the DECA business competitions across Canada and the United States.

During her final co-op work term and extended contract employment with the MTO, Philpott worked closely with accessibility legislation to develop an accessibility plan and training program for her colleagues.

“My most recent co-op at the Ministry of Transportation was particularly meaningful because it gave me the opportunity to research and work with legislation and to educate my colleagues on accessibility and diversity legislation. This experience confirmed my desire to pursue an education in law and I aspire to become a labour and employment lawyer,” Philpott said.

Philpott received the award at a recent co-op celebration at the Marilyn I. Walker School of Fine and Performing Arts.

“Overall, Jennifer’s Brock experience is the culmination of what we would want a co-op student to have. She made a positive impact on our university community,” Lathrop said.

National Co-op Education Week runs March 14-18 and Brock’s co-op office is celebrating by taking to social media to raise awareness about co-op education and the Brock experience. The goal is to have each of Brock’s 2,200 co-op students use the hashtag #Brockcoop once a day.

A contest is running this week and co-op students can participate in online daily challenges for the chance to win daily and grand prizes that include $100 gift cards to popular retailers. Brock’s Co-op Programs Office will also be hosting daily challenges and rewarding prizes to the winners.