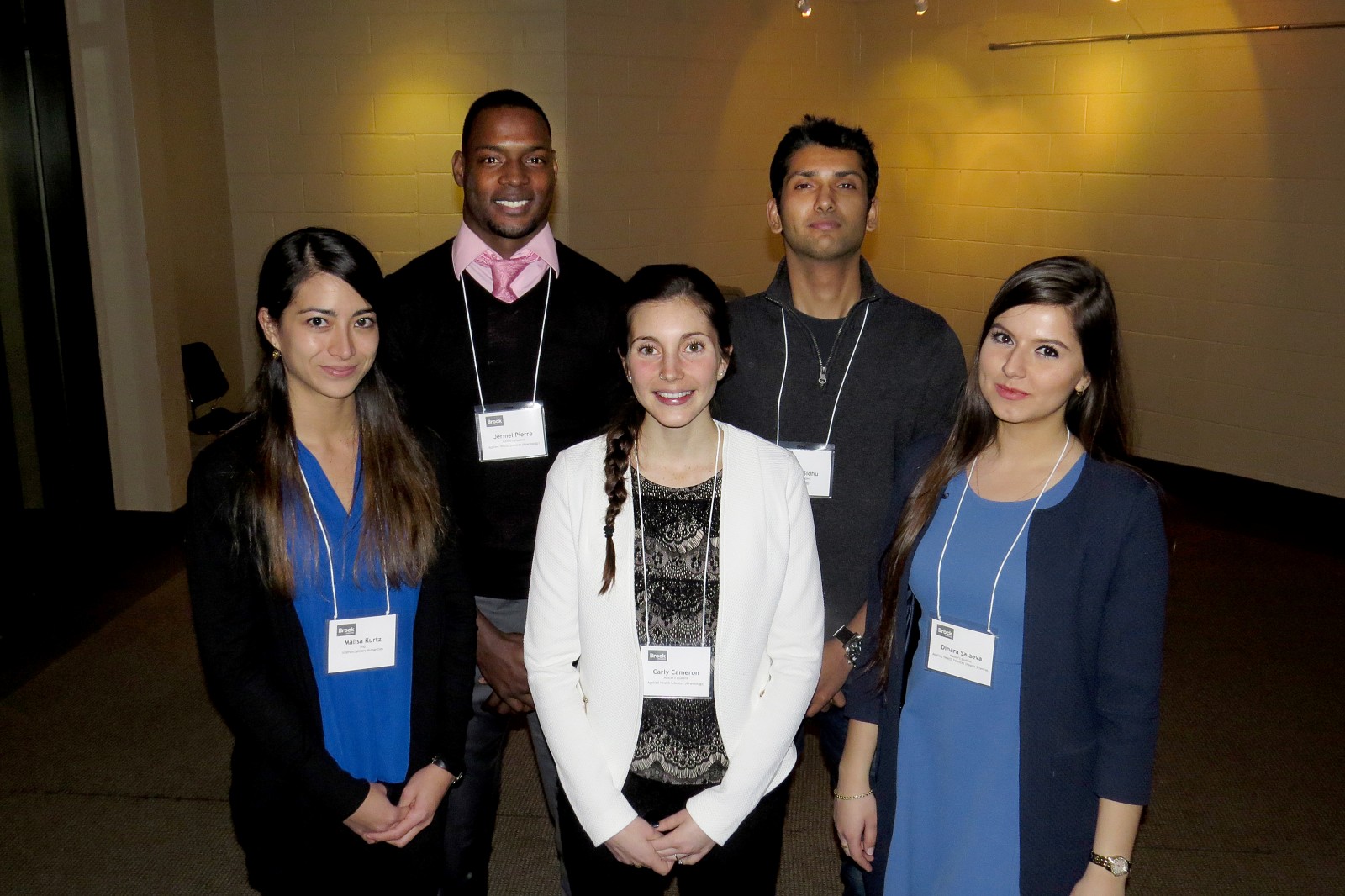 The five finalists for Brock University's Three Minute Thesis competition are, from left: Malisa Kurtz, Jermel Pierre, Carly Cameron, Anshul Sidhu and Dinara Salaeva. The will compete against each other April 7 after making it through the preliminary round Feb. 23.

Those were the winning topics in the preliminary round of the Three Minute Thesis (3MT) competition at Brock University Tuesday, Feb. 23.

As a judge, I was amazed by the calibre of student research taking place at Brock. And, I was equally impressed by the 14 students who showed their skills and passion in explaining their research in just three minutes or less.

I know exactly how difficult – or near impossible – it is to distill complex ideas and information into clear and concise material for public consumption. It’s a challenge that requires skill and a deep understanding of the subject.

“For students, it is the opportunity to develop communication skills beyond traditional ‘academic conferences’ – learning to present complex research succinctly in a manner that everyone can understand, but without losing the essence of the importance of the work is important for students – especially moving beyond their graduate studies,” said Associate Professor Kim Gammage, Brock’s 3MT co-ordinator.

The 14 graduate students who presented Tuesday made research presentations that conveyed the nature and importance of their work in language that was easy to understand.

What wasn’t easy was choosing the five best presentations. My fellow judges, Grant Armstrong, Associate Vice-president of Human Resources, and Ryan McCarthy, Director of Research Services, and I had our work cut out for us in deciding who would move on to the Brock finals on April 7.

Advancing to the final round are (in no particular order) Malisa Kurtz, Jermel Pierre, Dinara Salaeva, Anshul Sidhu and Carly Cameron.

Kurtz, Interdisciplinary Humanities PhD student in the Faculty of Humanities, is researching postcolonial science fiction, what can be learned from it and how it helps us imagine a less exploitative future.

Pierre, a Kinesiology Master’s student in the Faculty of Applied Health Sciences, investigated the effects of self-selected music on physical activity and found that your personal playlist is more motivating during exercise.

Salaeva, a Health Sciences Master’s student in the Faculty of Applied Health Sciences, explored how a father’s involvement in very early childhood impacts development by studying 412 Vietnamese fathers during the first nine months of their infant’s life.

Sidhu, a Biotechnology Master’s student in the Faculty of Mathematics and Science, is researching the destructive diamondback moth and ways to mitigate the pest’s damage to crops through intercropping.

Cameron, a Kinesiology Master’s student in the Faculty of Applied Health Sciences, studied the use of mirrors in the gym setting and how they can be used to promote fitness in women rather than as a critical lens they see themselves through.

The top five presenters demonstrated all of the key components of the contest and were judged on communication, comprehension and engagement.

“Getting information to those beyond academics is becoming more and more important for researchers at universities, and is critical as many of our students will go on to employment outside academia,” Gammage said.

Dean of Graduate Studies Mike Plyley agreed and said he encourages all students to give the three-minute thesis concept a try.

“It causes one to completely focus on the work, why it was done, how it was done, what was found, and what was learned,” he said.

“Approach the 3MT as a challenge in which one must sift through all the details that are part of your research and thinking, weighing each piece, evaluating it, and deciding if it adds a piece to the puzzle that you will be presenting.”

Gammage said the competition benefits the students, but also the University. The contest highlights the wide breadth of research happening at Brock.

The research presented throughout the preliminary round of competition was as varied as the programs offered at Brock – from an examination of the link between religion and anti-gay prejudice to the impacts of executive compensation on employee wages.

The top five presenters now advance to the 3MT contest finals that will be held on Thursday, April 7 as part of the 11th Annual Mapping the New Knowledges Graduate Student Research Conference.

The overall winner of Brock’s contest will receive $500 and the runner-up $250. Brock’s winner also will advance to the provincial 3MT competition hosted by Wilfrid Laurier University on Thursday, April 14. The top finishers in Ontario move on to a 2016 national competition that is sponsored by the Canadian Association for Graduate Studies and held later in the spring.