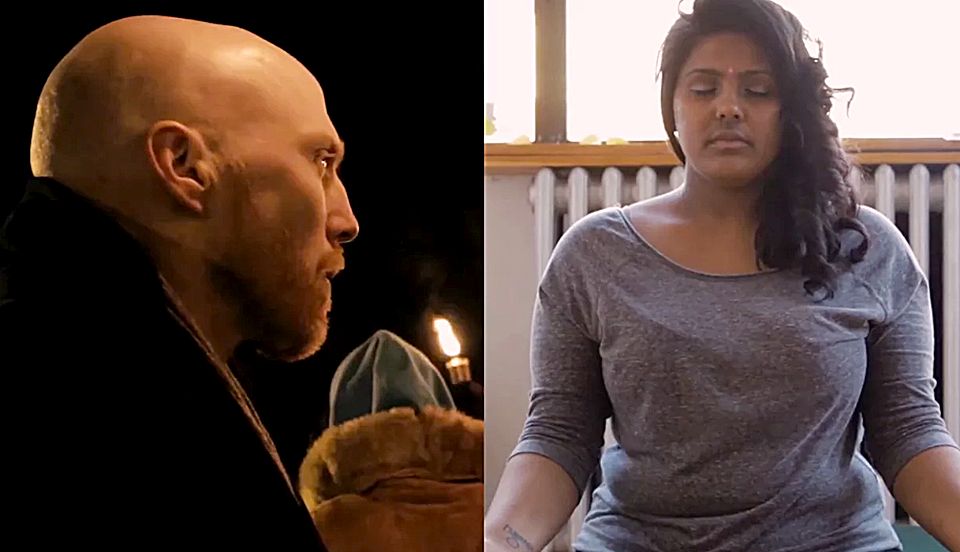 Simon Black, Assistant Professor in the Centre for Labour Studies, left, recently appeared in The Spirit of Social Change along with fellow activist Nayani Thiyagarajah, right. These images are from the short documentary, which was screened in Toronto last month.

Simon Black, Assistant Professor in the Centre for Labour Studies, recently appeared in The Spirit of Social Change, a short documentary film that had its Toronto premiere last month.

The premiere event featured a panel discussion with Black, filmmaker Tendisai Cromwell, and activist Nayani Thiyagarajah, which was moderated by Pacinthe Mattar, a producer at CBC’s The Current.

Black is one of two activists featured in the documentary, which grew out of the Spirit of Social Change conversation series at the Couchiching Institute on Public Affairs, one of Canada’s oldest and most celebrated public affairs forums.

Tendisai Cromwell, director of the documentary, reached out to Black early last year to invite him to participate because of his research, writing and activism around issues of poverty and labour injustices. However, Black’s classroom practices became part of the film, as well.

“I attempt to create a learning environment in which students think critically about various issues in labour studies — ranging from sweatshops and workers’ rights to precarious employment and racism, sexism, ableism, homophobia and transphobia in the workplace and labour market — and how they are part of broader structures of power, domination and oppression,” Black explains.

But he also believes students should learn about social movements, including the labour movement, and other struggles for a more just and equitable economy and society — a conviction that is reflected in the film.

When asked about the film’s timeliness, Black points to recent headlines around the world. “For some, spirituality shapes their engagement with questions of social injustice. We are in a moment of global unrest and social protest — for example, the ongoing struggles of indigenous peoples, Black Lives Matter, protests against neoliberal austerity.”

The trailer for the documentary is on the New Narrative films web site. The documentary will eventually be available in whole on the Couchiching Institute web site.