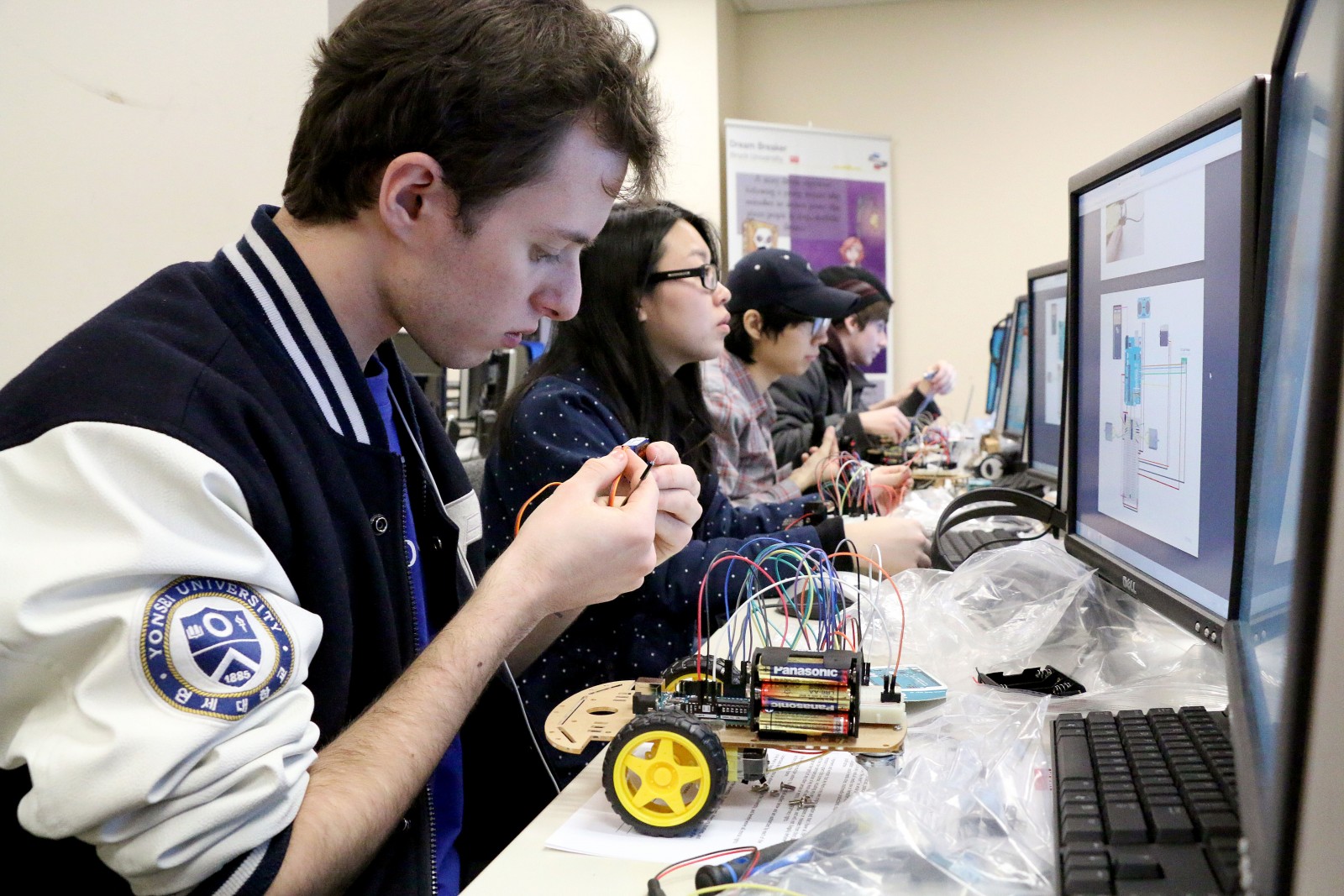 Many techies can remember tinkering as kids. Whether they were taking apart electronics, programming computer chips or building their own motherboards, their love of technology usually started in adolescence.

A partnership between Brock University and IBM aims to ignite in today’s kids that same spark of interest in technology.

That goal is what attracted Adam Balint to the Brock University Design Studio (BUDS) program, in which students across various Brock programs collaborate on externally sponsored interactive media projects.

The fourth-year computer science student is part of a team working on the Brock/IBM Arduino Project, which will see IBM distribute an autonomous rover — a simplified version of NASA’s Mars Rover — to Grade 8 students. It will be an open-sourced, inexpensive kit for students to take home, build and learn from.

As far as we know, this is the first project of this scope and partnership in the world between industry and academia to deliver something to kids.

“I did this type of stuff in high school. That’s what got me involved in the technology and computer science area,” Balint said. “I wanted to share that joy and the sense of accomplishment with students across Canada.”

Brock students taking part in the BUDS program are helping source the components of the rover as well as testing it and the open-source, inexpensive Arduino microcontrollers that will operate it.

As part of the project, students are creating an instructional guide to be part of the rover kit distributed by IBM to students across the country.

“As far as we know, this is the first project of this scope and partnership in the world between industry and academia to deliver something to kids,” said Norm Chatelier, IBM Canada’s Manager of Strategy and Innovation.

“Even if we get one out of 20 students to use this technology for fun, what they learn can take them all the way to a PhD.”

IBM has a long history of promoting education and hopes this program will encourage kids to get into the fields of science, technology, education and mathematics, he said.

He said traditionally students are exposed to expensive technology in schools and don’t get hands-on access to robotics or electronics.

“We wanted to create something that the kids could have free and open access to that they can take home and break,” Chatelier said. “Part of learning, exploring and discovery is breaking stuff.”

Andrew Roth, Technical Associate in the Centre for Digital Humanities at Brock, said there are a dozen students from a variety of programs taking part in the project.

“We wanted that blend of people who could see things with fresh eyes,” he said.

He said the class is on the fourth prototype of the rover.

“We’re trying to make a very low-cost version that you can give to a student and everything is there in the kit,” he said. They can’t include any specialty parts in the kit and can’t require students to solder or drill anything to put the rover together.

The students are working with Brock’s Youth University and graduate education students to test their work with kids.

Roth said the BUDS program is an example of experiential learning at Brock. There will be an opportunity for students to remain engaged in the project after the class is complete, he said.

“We’re hoping students take an interest in this beyond the confines of the course,” he said.

David Hutchison, director of the Centre for Digital Humanities, said through BUDS, students get course credit for real-world work.

“The idea is we invite students to participate in collaborative projects sponsored by outside organizations,” he said. Students learn skills related to project management, including managing a project schedule, working as a team and mitigating risks that a project may face.

Zachary Cervone, a third-year interactive arts and science student, said he signed up for the BUDS class after seeing the IBM project outline.

“It looked really prestigious and really hands-on. I wanted to expand my knowledge and help Grade 8 students become interested in my field,” he said.

He said the opportunity to make a vehicle for program credit is amazing.

“It’s a chance to see what your practical skills can do,” he said. “You can pretty much do anything from a computer to the physical world.”

Chatelier said IBM would like the rovers to roll into classrooms in Niagara and the Greater Toronto Area in the fall of 2016.