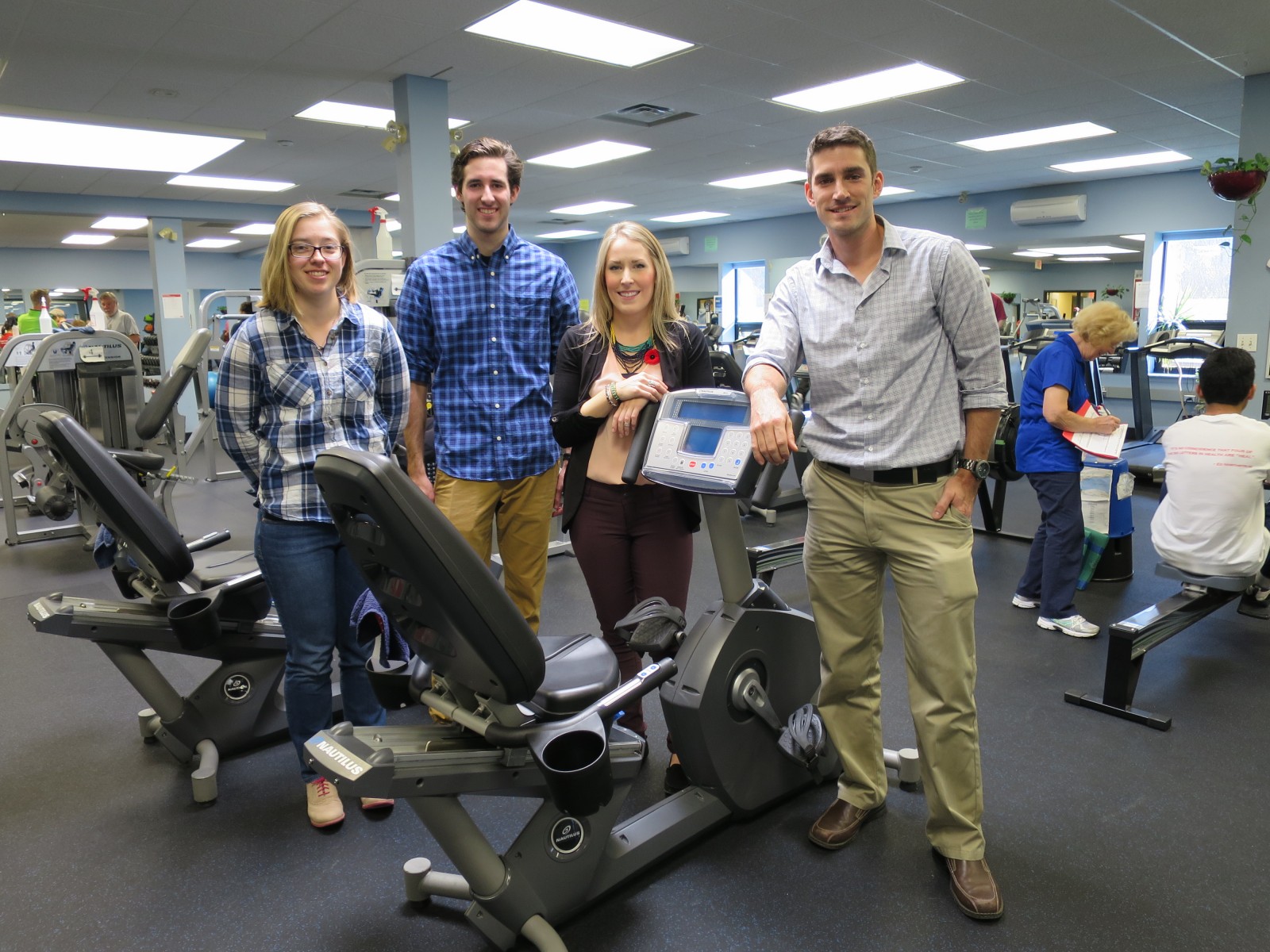 Scott Donia understands how much it means for people to maintain and, in some cases regain, a healthy and independent lifestyle.

The master’s student in Applied Health Sciences has witnessed the impact the Brock-Niagara Centre for Health and Well-Being has had on a growing number of community members since he began volunteering at the Centre during his undergraduate degree.

The Centre currently offers four programs that provide a holistic approach to health and well-being. The programs include Heart Strong, Power Cord, Brock TEAM (Therapeutic Exercise for Amputees in Motion), and SeniorFit. These programs support individuals living with cardiovascular disease, spinal cord injury, multiple sclerosis or the loss of a limb, and healthy Niagara seniors looking to stay fit in a welcoming social environment.

Donia will be among the Centre staff, members and researchers speaking during a Research Café Wednesday, Nov. 18, 4:30 to 6:30 p.m., at Pond Inlet. The Café, “Working toward a healthy Niagara,” will also hear from several of the Centre’s 300 community members. The event is open to everyone. For more details about the program see the Café website here.

Donia’s role at the Lockhart Drive facilities has continued to grow. He is a part-time supervisor for the Centre, as well as the head trainer and co-ordinator for Power Cord. He’s also pursuing research at the Centre to study how different exercise modalities can have the greatest and most efficient benefits to the individual on multiple levels.

“Seeing the physical, functional, and psychological benefits of the clients allows me to believe that I’m truly making a difference in the world,” says Donia. “Personally, I see the positive influence it has on me in my confidence in communicating with people, prescribing exercise, and being able to adapt on the fly as everyone has varying abilities when working with these populations.”

The Centre employs about 100 undergraduate and graduate students each semester who work with the growing membership and on customized exercise programs. Particularly graduate students who connect their thesis projects to programming, students also help drive the Centre’s research.

Other graduate students to give short presentations on Nov. 18 are:

Bailey is a part-time Centre-Assistant and her role is to work with the student trainers in supervising the specialized exercise programs. Her research interests, both as a master’s student and now as a doctoral student, include exploring and promoting positive body image experiences in a diversity of populations including people with physical disabilities and older adults.

In conjunction with the Senior Fit program, Bailey conducted a study exploring body image experiences and coping mechanisms used by older adult women. She’s also a lead tester on the Balance and Strength in Community Seniors intervention study taking place at the Centre.

As part of her PhD studies, Bailey will be working with members of the Centre to develop, implement, and evaluate a positive body image program that can be adapted by other organizations such as Spinal Cord Injury Ontario and the Niagara Centre of Independent Living.

“My passion is to help others learn to have more positive perceptions, cognitions, and attitudes towards their bodies. This is in hopes to improve the well-being and quality of life of individuals who may be at particular risk of body image suffering,” she says.

Dempster discovered the Centre somewhat by chance in the summer of 2013 while an undergraduate student in Kinesiology at the University of Waterloo. Dempster came to the Centre for a week to help collect data with Waterloo doctoral student Laura Fitzgibbon who was involved with the Centre while completing a master’s degree at Brock. A year later Dempster was applying to Brock to pursue her master’s degree and research studies in conjunction with the Centre.

“It was during the research work with Laura that I developed a serious interest in cardiovascular research and decided to pursue graduate studies. Laura always spoke very highly of her time at Brock and with her master’s thesis supervisor, Dr. Debbie O’Leary,” she says.

Dempster has a broad research interest in cardiovascular physiology. Specifically, she is looking at the influence of isometric handgrip exercise training on cardiovascular and cognitive health in people with resistant hypertension.

Later this fall she will be recruiting members of Heart Strong program to participate in the study.

Allison’s area of research is in neuroimmunology. His particular interest is in the influence that immune dysfunction, in the form of chronic inflammation, can have on the nervous system and behaviour. Allison has had a front-row view on the Centre’s growth and development as an undergraduate, master’s and now doctoral student at Brock.

“I began working in the Centre in 2009, before it became Power Cord,” says Allison. “At the time we were extremely limited in equipment and volunteers so myself and my lab partner, Hisham Sharif, ran the Centre each day and had to be quite creative when developing exercise programs.”

That included making use of ramps in the hallways for aerobic exercises and using themselves to provide resistance to take clients through workouts.

“Today, the Centre is well established with lots of accessible equipment, a large number of undergraduate and graduate student volunteers, and a large, and continuously growing, client base,” he says.