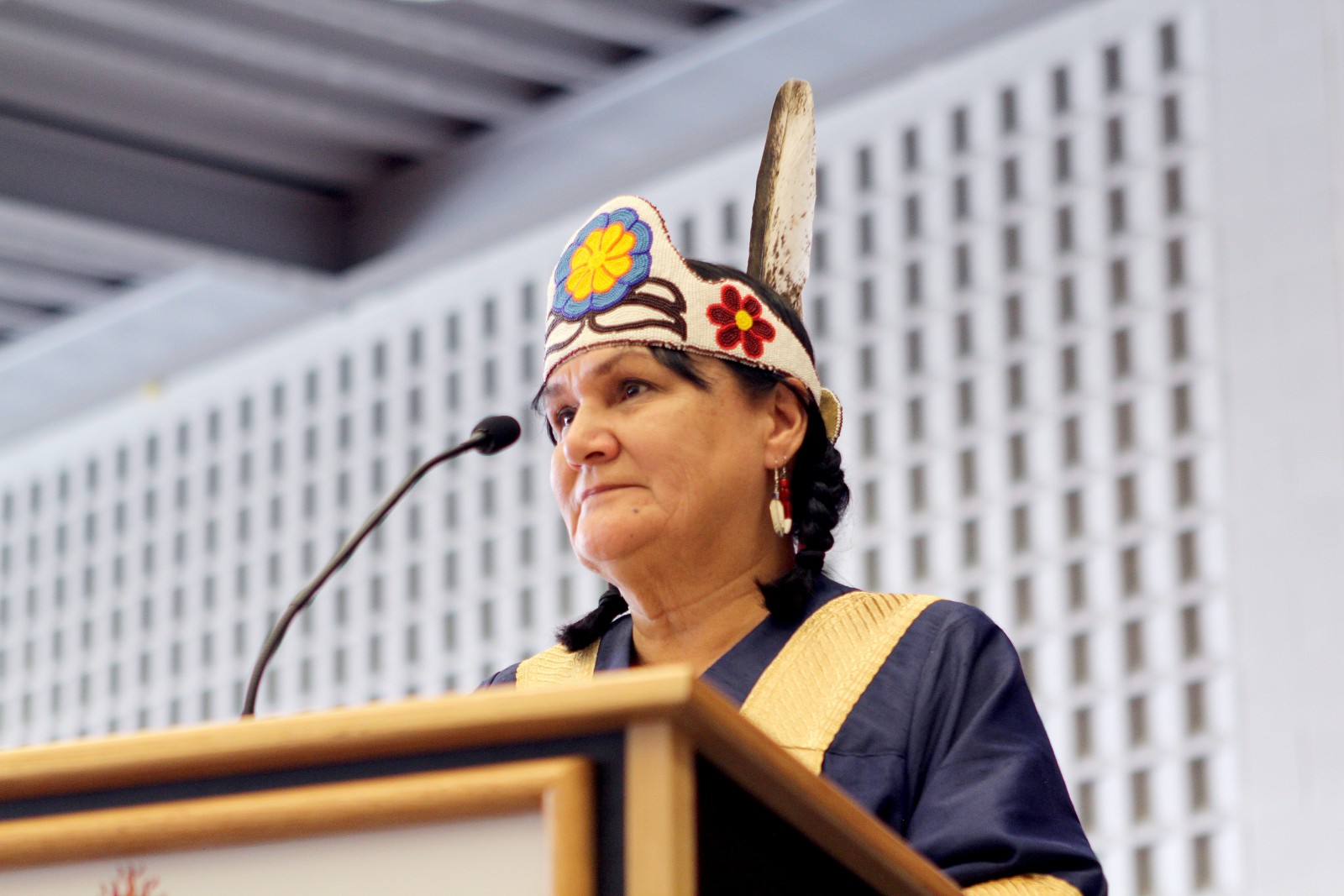 Brock University’s new Chancellor Shirley Cheechoo made history Saturday when she was installed during an emotional and inspiring ceremony in front of hundreds of graduates.

She is Brock’s first woman and first aboriginal person to be Chancellor.

In her first convocation speech, Cheechoo talked of racism and the struggles of First Nations people.

“I come from a background where when we spoke, our voices were not heard,” she said. “Today we still feel marginalized, excluded and devalued.”

As a residential school survivor, Cheechoo said she’s struggled throughout her life. In her 20s, Cheechoo found art and is now a world-famous filmmaker, writer and visual artist.

“Healing is the first step on the road to empowerment,” she said. “I took this position to make a difference and I worked hard to move beyond old racial wounds.”

She said forgetting the past is not the way forward. In fact, she pointed to one of the recommendations out of the Truth and Reconciliation report, which stressed the need for more education about aboriginal people. The federal government compiled the report after extensive interviews with First Nations people who were ripped from their families and put in schools aimed at stripping them of their native heritage.

“My hope is that Brock takes a leadership role,” she said. “Canadians should know about the first people of this country and I wear this eagle feather to symbolize the beginning of First Nation history in the classrooms.”

Tears filled her eyes as her older brother Ben placed a beaded crown adorned with an eagle’s feather on her head. Her mother made the crown when Cheechoo became Canadian Native Princess, a title she still holds.

Cheechoo – a member of the Cree tribe – lives on Manitoulin Island, where she runs the Weengushk Film Institute for aboriginal youth.

Following her speech, outgoing chancellor Ned Goodman gave Cheechoo a high five. He looked proud to be passing the role to her after serving for eight years.

He said he was honoured that her first duty as chancellor was presenting him with an honorary Doctor of Laws degree.

“I wish you all the things that come well with the role you have taken on,” Goodman said to her during his convocation address. “They are all related to young people and that’s the nice part of being involved in a good university.”

Brock President and Vice-Chancellor Jack Lightstone thanked Goodman for his service, noting he shook the hands of more than 30,000 graduates and presided over 75 convocations since 2007.

“Ned has been a great booster for this institution,” Lightstone said. “Ned is not ambitious for himself, but he’s been ambitious for the university. He has been a transformational benefactor of our business school.”

Nearly 1,000 students walked across the stage from the faculties of Mathematics and Science, Humanities, Education, Applied Health Sciences, Social Sciences and the Goodman School of Business. Of those, more than 300 were grad students from the Faculty of Graduate Studies.

The following awards were presented during convocation:

The Governor General of Canada has presented a Silver Medal to be awarded to two graduating students with the highest standing of all graduates in a first honours degree. Graduate from the Fall and Spring Convocation are eligible for this award.

Board of Trustees Spirit of Brock Medals

Awarded to one undergraduate and one graduate student per Faculty who best exemplify the spirit of Sir Isaac Brock.