Settlement part of permanent collection thanks to arts council award 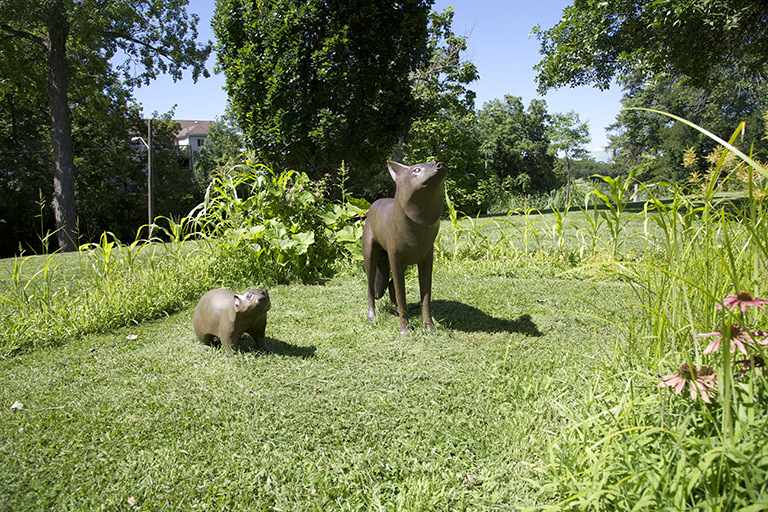 A bronze coyote and badger sit in a garden the size of a frontier home as part of an art installation at Rodman Hall by Mary Anne Barkhouse. An art award has enable the University to buy the work.

An outdoor art installation has become a permanent part of Rodman Hall Art Centre’s collection thanks to a $30,000 funding award through Canadian Council of the Arts.

The York Wilson Endowment Award was given to Brock University for Settlement, a work by Canadian artist Mary Anne Barkhouse.

That means the temporary exhibition will remain permanently on display in Niagara.

“The artist designed the work to talk about issues of territory,” said Stuart Reid, Director/Curator of Rodman Hall. “There’s a lot of resonance for Niagara and for this region.”

Settlement incorporates two life-size bronze sculptures of a coyote and a badger in an artist’s garden built in the shape of a frontier house (16×20 feet).

Reid said the two animals allude to the co-operative nature of the allies involved in the 1812 conflict.

“In the wild, coyotes and badgers work together and both benefit from a partnership while they hunt,” he explained. “The animal partnership is an analogy for the allied co-operation between the settling people during the War of 1812.”

Barkhouse, an aboriginal woman from Minden, planted a series of border gardens of indigenous plants including the “three sisters – corn, squash and beans,” Reid said.

He said the art installation is an important cultural and educational resource in Niagara.

“Settlement has already become an important landmark for visitors and a catalyst for community storytelling in Niagara,” he said. “It will also have a significant impact on local schools through our continued education programming activities. Our art educators continue to teach and discuss First Nations art while examining issues of sovereignty and confederacy from an Indigenous ecological point of view.”

The York Wilson Endowment Award is given to a Canadian art museum or public gallery to help it purchase work by a living Canadian artist that will significantly enhance its collection.