2000 Years on the Edge moving to new campus location 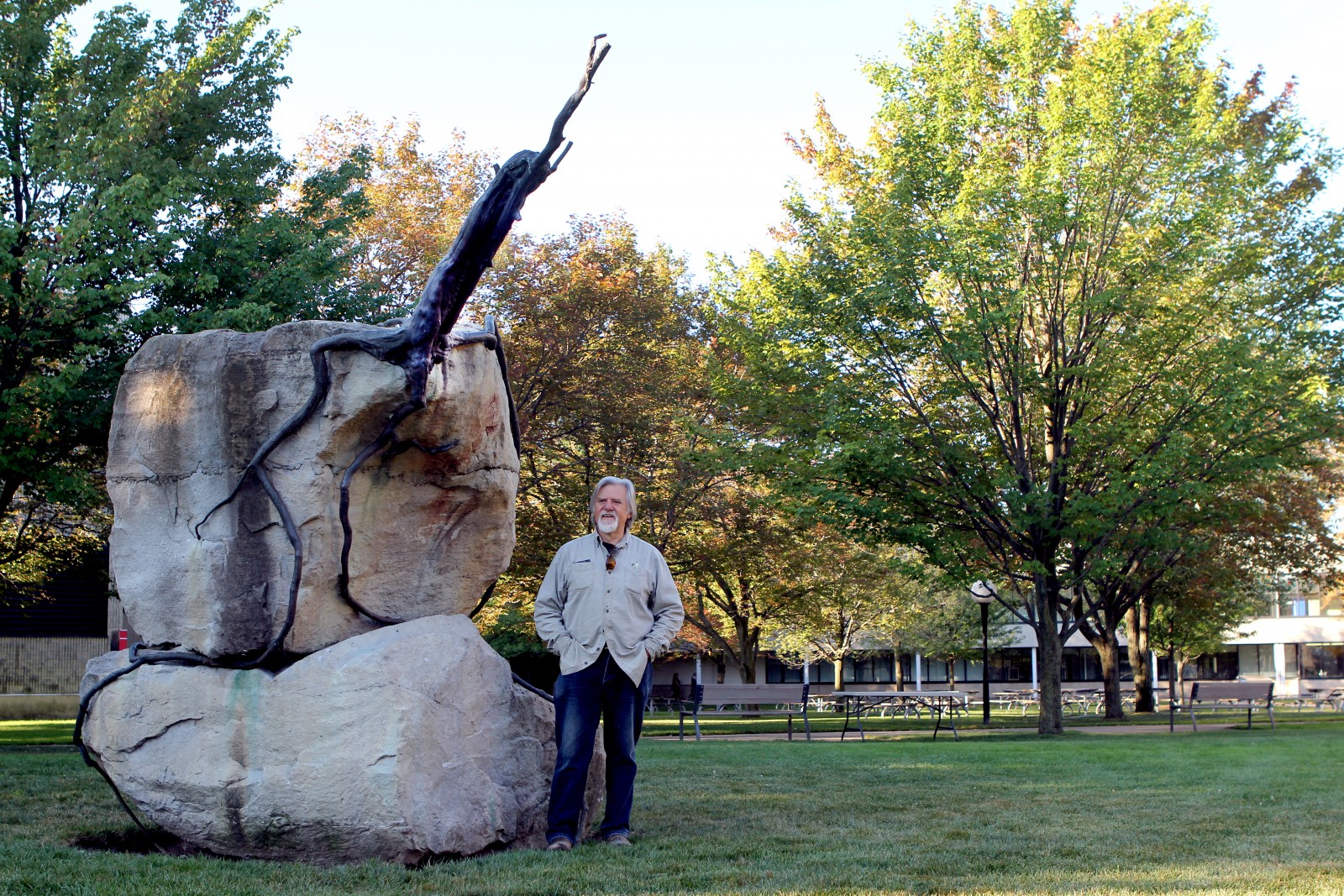 Canadian artist Reinhard Reitzenstein stands beside his sculpture 2000 Years on the Edge, which is moving from Jubilee Court where it's pictured, to a spot between the Plaza Building and Cairns Complex.

Its elements are as old as the escarpment where it sat nestled in Brock University’s Jubilee Court for 16 years. On Friday, the Reinhard Reitzenstein piece 2000 Years on the Edge will rest in a new location among the contemporary designs of Brock’s Plaza Building and Cairns Complex.

The sculpture’s two 11-tonne limestone boulders wrapped in the limbs of a 600-year-old cedar will sit in stark contrast to its new surroundings and hopefully provoke a new interpretation of the piece, Reitzenstein said.

“It’s not often you get to change public art by relocating it,” said the Canadian artist, from Grimsby. “It changes the way we perceive the piece.”

In order to move the massive artwork, a 90-tonne crane was brought onto campus along with a crew of experts to orchestrate the complicated transport.

Derek Knight, Director of the Marilyn I. Walker School of Fine and Performing Arts (MIWSFPA), said the sculpture will be more visible in its new location.

“The fact that Reinhard’s piece is now being relocated is an opportunity for everyone to revisit and re-engage with it,” he said. “It lends a new life and new potential interpretation of the work.”

2000 Years on the Edge is an important piece of the University’s art collection and the last work commissioned as part of the Lutz Teutloff Collection.

“The piece is a wonderful metaphor for the tenacity of life and the delicate ecosystems found on the Niagara escarpment,” said Stuart Reid, Director/Curator of Rodman Hall Art Centre. “It really does remind all of us at Brock that our university is nestled in a Unesco World Biosphere Reserve.”

Brock is sitting on the edge of the escarpment, so people are reminded of where they are. Reinhard Reitzenstein

Reitzenstein said he made a mould of a 600-year-old cedar and incorporated a human spine and his signature wasp’s nest in the piece, which was created at the William Jurgenson Art Foundry in Grimsby.

“I wanted to address the Niagara escarpment,” he said. “Brock is sitting on the edge of the escarpment, so people are reminded of where they are.”

For the artist, the statue’s move from Jubilee Court is welcome.

“In Jubilee Court it echoes the escarpment, it faces the same way,” he said. “The piece is going to be flipped. I like the contrast.”

Reitzenstein, a professor at the University of Buffalo, was consulted on the move and was on hand Friday to re-weld pieces of the bronze limbs that had to be cut in order to accommodate the move.

On Monday, three other pieces of Brock’s statue collection will be moved downtown to the MIWSFPA campus.