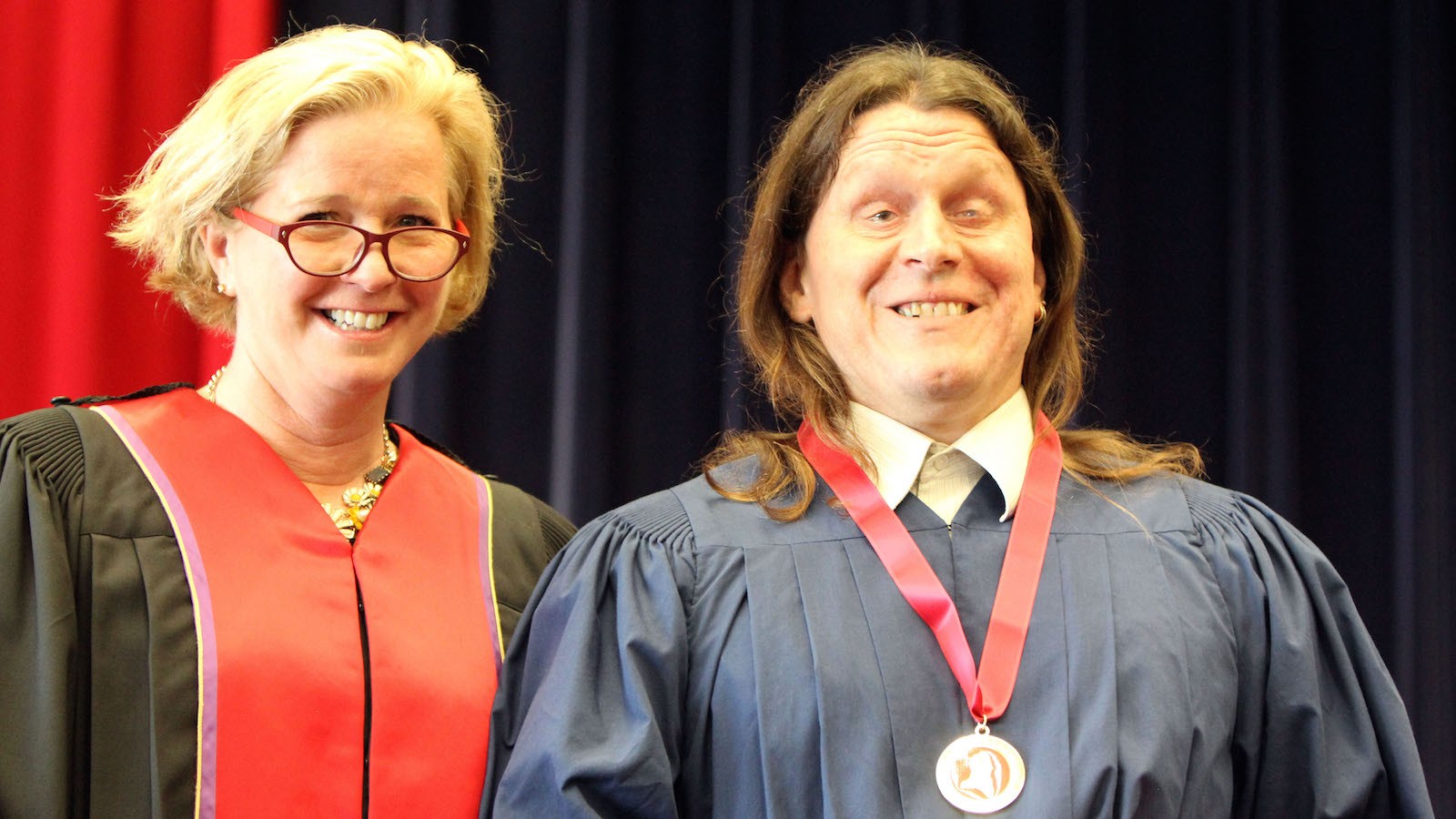 William Morgan received the Spirit of Brock medal from Carolyn Hurst of Brock's Board of Trustees at Wednesday morning's Faculty of Education convocation ceremony. William Morgan received the Spirit of Brock medal from Carolyn Hurst of Brock's Board of Trustees at Wednesday morning's Faculty of Education convocation ceremony.

William Morgan has a thing about expectations.

He thrives on going beyond them. If he didn’t, chances are he wouldn’t have represented Canada in Judo in three Paralympics or five world championships.

It’s also possible that Morgan wouldn’t have stood on stage at Wednesday morning’s convocation ceremony where the Faculty of Education graduate received the Spirit of Brock medal for his stunning accomplishments, which, when listed out loud, roused the crowd to a standing ovation.

If Morgan just accepted what was expected of him, he would have taken to heart being told by a teacher when he was nine that he’ll never play sports. And who knows what else Morgan, who lost his vision at age five after an allergic reaction to penicillin, may have been led to believe.

“I still remember being told that,” Morgan said after the ceremony. “It was just motivation. I don’t hold anyone responsible because like anything else, education has come a long way.”

A long way from tiny Mactier, Ontario in the mid-1980s when Morgan, the only visual impaired person in his hometown just south of Parry Sound, was told there would be no baseball, soccer or hockey in his future. There just weren’t the resources to help him flourish and keep him safe.

The news was a blow to a boy who, like every other boy his age, loved to run and be rambunctious. “Safety would have been a concern but no matter how you keep a child safe, a child is always at risk of getting hurt,” Morgan explained. “You provide these opportunities in the safest way possible. You don’t take away those opportunities and do restriction for safety.”

That was something Morgan, 40, learned when he began attending Brantford’s W. Ross Macdonald School for visually impaired students. There, he discovered individual sports, including wrestling, and excelled.

He competed on the Canadian Blind Wrestling team at the 1990 world championships in Holland before trying his hand at judo the following year.

Morgan went on to earn his third-degree black belt in the sport, becoming the first Canadian with a visual impairment to reach such a rank. He began coaching judo and went on to become an educational assistant at W. Ross Macdonald.

In both those roles, he conveyed that same mantra that everyone deserves a chance. Jason Ribeiro, who graduated with his Master of Education, received the Spirit of Brock medal from Joe Robertson of Brock's Board of Trustees Wednesday afternoon.

“Every chance I get to talk about it and educate people – I think everyone should have the opportunity. The Paralympic movement has grown and I think it’s unfortunate when anyone is held back.”

Morgan brought that determination with him when he began studying education at Brock four years ago. As the first person with a visual impairment to attend Brock’s Hamilton campus, Morgan said he used his time there as another opportunity to educate when concerns were raised about how he’d complete his program.

He used screen-reading software to read class notes and textbooks. Classmates would also help by taking notes and sending them to him in a format that his computer could read. He found a way to get to and from his practicum, though he couldn’t drive himself. And he has made it his goal to return to W. Ross Macdonald as a teacher so he can continue to demonstrate that expectations – at least those put upon us by others – are arbitrary.

“In the end, it was me guiding people (at Brock) instead of them guiding me,” Morgan said. “I’ve advocated for myself my whole life so this was no different.”

Master of Education student Jason Ribeiro was also recognized Wednesday when he was presented the Spirit of Brock medal at the afternoon ceremony. The award is given to students who demonstrate leadership, innovation, courage, inspiration and community involvement. Dean of Education Fiona Blaikie presented Peter Vietgen from the Department of Teacher Education with the Award for Teaching Excellence on Wednesday afternoon.

Peter Vietgen, associate professor in the Department of Teacher Education, received the Faculty Award for Excellence in Teaching. In his address to graduates Wednesday afternoon, he channelled his inner David Lettermen and presented his Top 10 list of Ruminations, Aspirations and Introspections.

He reminded graduates of the importance of emotional intelligence, to never stop learning and to celebrate the differences of their students.

“Celebrate uniqueness. Celebrate difference,” Vietgen said. “Encourage your students to be who they are and not who they think they should be. They will thank you for this.”