Hon doc to grads: “Everyone has value” 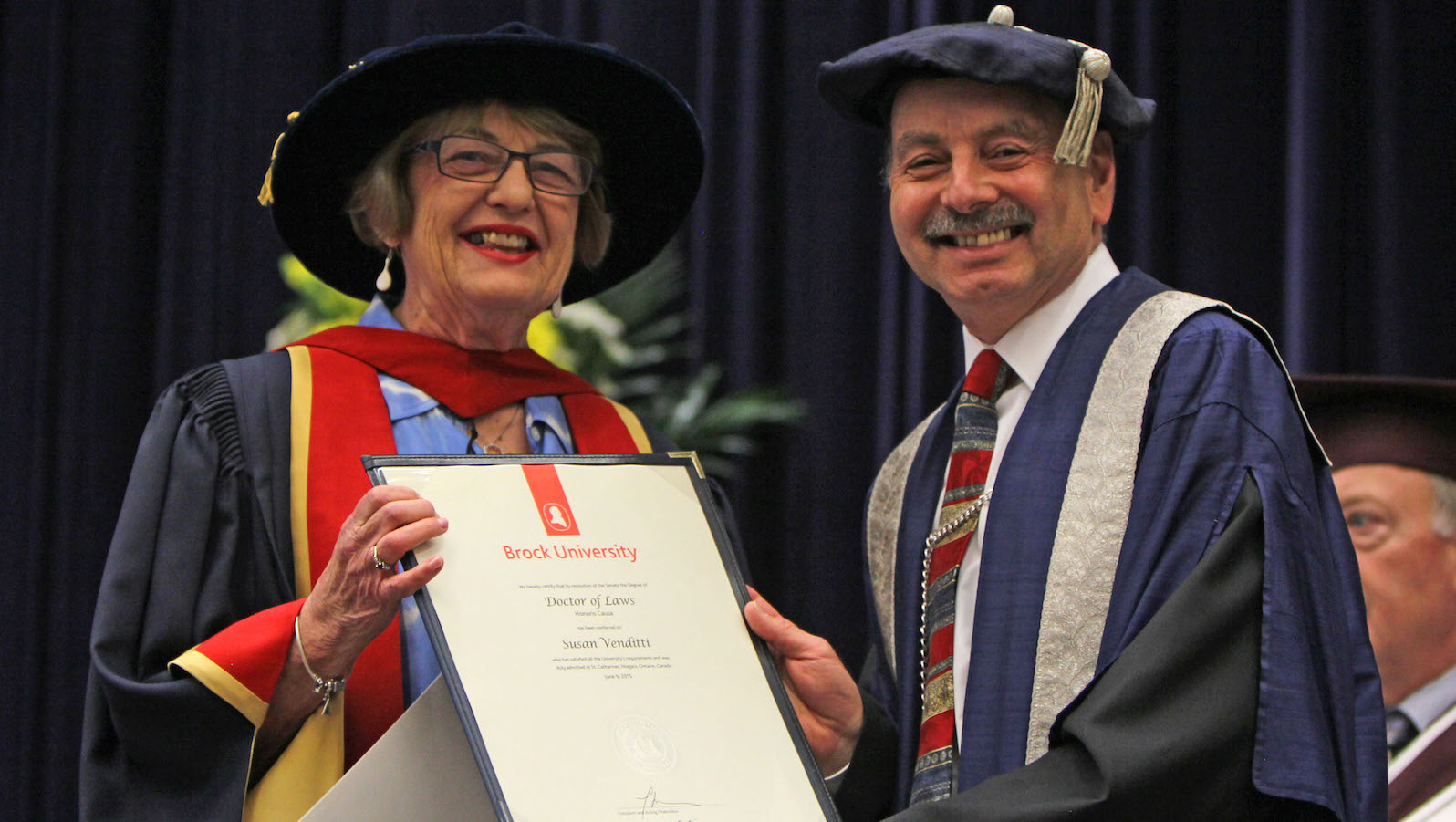 When Susan Venditti started volunteering with Out of the Cold 20 years ago, it seemed like the perfect gig.

She felt good about what she was doing by helping homeless people stay safe, warm and fed on a cold winter’s night. But even better, when she finished her shift, she could return to her “pretty perfect life” and never get too emotionally involved with the people she’d assist, though she certainly had plenty of judgment.

“It was a wonderful volunteering job, I thought. I felt great about helping and I was so sure it would interfere with nothing,” Venditti recalled. “I felt I knew a lot about homeless people; where just like many others, I had a lot of assumptions. I knew exactly what they should do, how they should be living their lives. The only problem was I didn’t actually know a homeless person at the time and I certainly didn’t know any of the them by their name.”

That changed one shift when a woman approached Venditti and implored her to do something more.
“(She said) ‘You middle class ladies have to help us because we’re going to die out here.’ This was a direct call to action,” Venditti remembered. “Message received.”

Encouraging graduates to use their education to build a better world was the message Venditti hoped was received Tuesday morning when she relayed that and many other stories of self-awareness and growth at the Social Sciences convocation ceremony where she was presented with an honorary degree from Brock. Kaitlin McKay (right), who graduated with her honours degree in child and youth studies, was presented the Spirit of Brock medal Tuesday by Kristine Freudenthaler of Brock's Board of Trustees.

The humanitarian is one of two recipients to receive an honorary degree from the University during spring convication. Canadian astronaut and neurologist Roberta Bondar will be recognized Friday.

As the executive director of Start Me Up Niagara, Venditti has long since traded in her emotionally detached existence to throw herself into helping St. Catharines’ homeless and unemployed, and those with mental illness.

She told graduates that a better future is built by caring, and forgetting the boundaries that separate us.

“I’ve learned that everyone has value,” Venditti said. “I know that being kind is more important than being right. I know that life moves in directions beyond imagination. I know that hard work and perseverance make a difference. I know there’s much left to do.

“Graduates see how fortunate you are. Be grateful,” she added. “Use your education to make a difference. Start with those nearest you then spread your wings. There’s still time to build a better world.” Hamilton, who graduated from Brock in 1990, recalled going off into the world at more optimistic time than those embarking on the rest of their lives Tuesday.

He conjured Star Trek character Mr. Spock as he told graduates that in a world of religious demagogues, climate change deniers and anti-vaxers who ignore scientific fact, Spock’s virtue of reason is needed more than ever.

“What could I possibly offer you to cure the ills of the day? I think we need to embrace our inner Spock…. It is through reason that we reach the best decisions, have dialogue and don’t try to stifle differing views.”

Also recognized Tuesday were graduates Kaitlyn McKay (BA) and Paul Adachi (PhD), who were presented with Spirit of Brock medals for demonstrating leadership, courage, innovation, inspiration and community involvement while studying at Brock.

Charissa DiMarco and Eryn Hartmier both received Dean’s Medals for having the highest standing in their respective degree programs. Paul Adachi, who graduated with his PhD in psychology, receives the Spirit of Brock medal from Kristine Freudenthaler of the Board of Trustees at Tuesday afternoon's convocation ceremony.