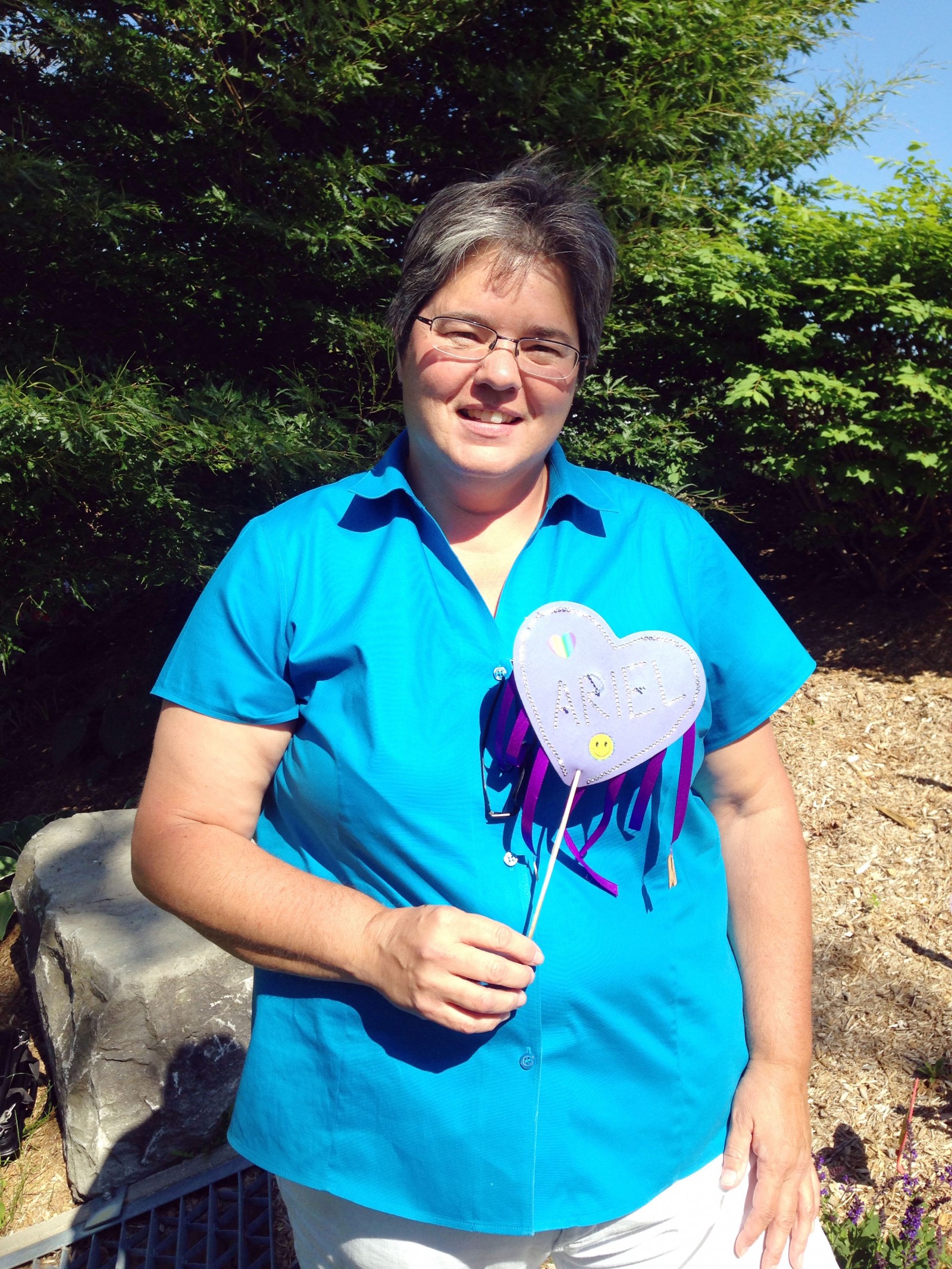 Sherri Vansickle holds a heart with her grandmother Ariel's name. It was one of 900 hearts staked in campus gardens last week to honour those lost to Canada's Indian Residential School System. Sherri Vansickle holds a heart with her grandmother Ariel's name. It was one of 900 hearts staked in campus gardens last week to honour those lost to Canada's Indian Residential School System.

Sherri Vansickle and her students went on a planting spree recently.

Vansickle, a lecturer in the Tecumseh Centre for Aboriginal Research and Education, her two classes, and members of the Canadian Union of Public Employees (CUPE) 4207 staked 900 colourful foam hearts amongst the ornamental grasses, shrubs and flowers filling gardens throughout the Brock campus.

But more than a splash of colour to spruce up University grounds, the hearts decorated with sparkles, ribbons and personal messages honoured children lost to Canada’s Indian residential school system between the 1840s when the first school opened and 1996 when the last one closed.

One of them was Vansickle’s grandmother, Ariel. In her memory, Vansickle tucked a purple heart, adorned with purple ribbon the colour of the Haudenosaunee Confederacy and tiny rhinestones spelling Ariel’s name, into a protected plot across from Welch Hall.

Horrific stories about life in Canada’s residential schools have only started to be told in the past 20 years since the last one closed, but Ariel, who physically survived her time at a residential school near Brantford, never spoke about her experience, Vansickle said.

“It’s actually pretty fresh and that made it very hard for her. But a lot of people don’t want to talk about it,” Vansickle said. “People think it’s way back in history but it’s not that far back.”

The hearts, created in Vansickle’s Aboriginal Arts and Spirituality classes, were part of the Honouring Memories: Planting Dreams project, a nationwide initiative led by the First Nations Child and Caring Society of Canada.

Over 150 years, seven generations of First Nations children between the ages of six and 16 were taken from their families and institutionalized in residential schools in the name of cultural assimilation. The result, however, was cultural genocide, as determined by the seven-year-long Truth and Reconciliation Commission, which officially came to a close last week with the release of a report outlining ways to move past, though never forget, the legacy of residential schools.

“If you think of Toronto, Halifax, Winnipeg and Vancouver with no six to 16-year-olds for over 100 years, that’s how it was in our communities. That’s a huge impact,” Vansickle said.

She embraced the project in large part to teach her mostly non-aboriginal students about the toll of residential schools on Canada’s First Nations.

“Part of it was actually having a true understanding of the intergenerational impact of residential schools and how it still affects us today,” she explained. “The way you get that is by having an instructor who lived it.”

Though Vansickle never attended a residential school, she has seen the effects of the schools on those close to her, and she has ultimately felt them, too.
“I have to pay for a language class but I should be fluent in Mohawk. That’s the impact.”

But Vansickle also felt the impact of her students taking so strongly to the project, which ended Friday when the hearts were removed. One of them has since been planted at Rideau Hall in Ottawa.

“It made my mama bear heart smile,” she said. “It’s one thing when something is important to you but when the students embrace it… they get it.”