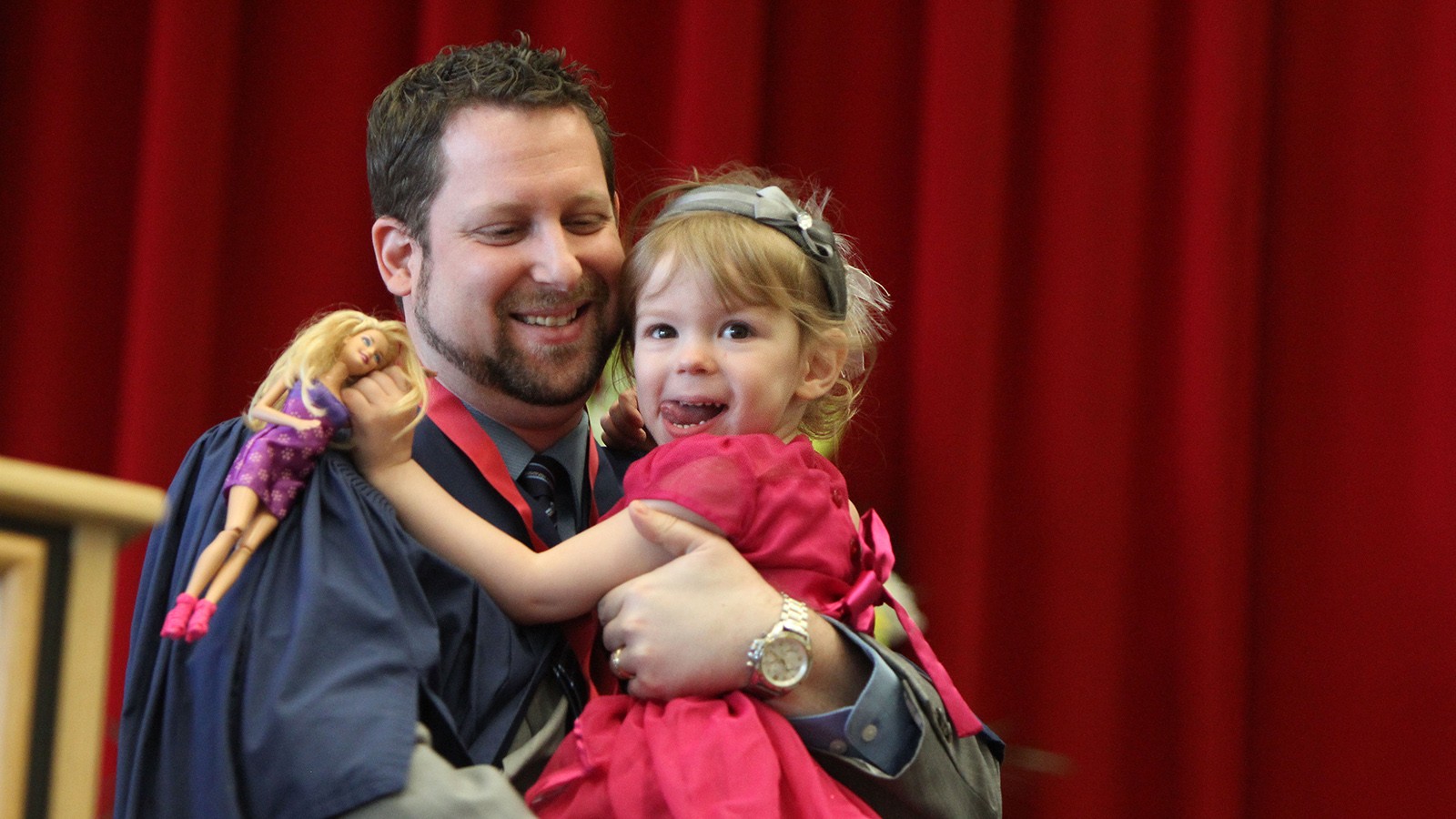 Andrew Ware didn’t need caffeine to keep him awake while studying at Brock University. His two daughters had all the energy he needed.

“Coffee and energy drinks will only get you so far, but when the kids are excited, it gets you excited. I’ve been living off of that for a while,” he said.

Ware, 35, was the Spirit of Brock Award grad student recipient for the Goodman School of Business Thursday during the third day of Spring Convocation.

The married father of two graduated with his Master of Business Administration more than a decade after completing his undergrad at Brock. After graduating the first time, Ware started working at local call-centre Sitel “just to pay back school debts,” but quickly worked his way up the ranks. From there he became a financial adviser at Meridian Credit Union, spending four years before deciding to return to school for his MBA.

“Getting a masters degree was something I always wanted to do. There’s never a right time to do it, but my kids were still young enough so I figured let’s do it while we still can,” he said.

In the crowd Thursday were his wife, Wendy, and daughters Paisley, 6, and Aurora, 3, who joined him on stage when he was presented with the Spirit of Brock medal.

Ware said having the support of family and friends is crucial for older adults looking to return to school.

Even if your kids don’t know what you’re doing, they’re still that positive energy that’s in your life,” he said.

The St. Catharines resident has already landed a job as a senior enterprise analyst for Red-D-Arc in Grimsby, where he was hired after completing a co-op placement there during his time at Brock.

Ware’s Spirit of Brock medal is a recognition of his leadership both at the school and in the community. While working toward his MBA, Ware was a student ambassador for the Certified Management Accountants of Ontario, Competition Coordinator for the Graduate Business Council, and a participant in the Brock Student Leaders Summit and MBA Games. Outside of Brock, he was an active member of the Junior Chamber of Commerce at the local, regional and national levels, where he notably won the award for being the most outstanding local president in Canada and helping families in need through Habitat for Humanity Niagara. Among other recognition and awards he has received, Ware was named one of the 40 Under Forty in Niagara and received the volunteer recognition award from the City of St. Catharines.

Also recognized with the undergrad Spirit of Brock Award Thursday afternoon was Anthony Marotta. As a co-op student, Marotta’s dedication led him to a full-time position at Spara Capital Partners. Among his many achievements at Brock, he was also inducted in to Beta Gamma Sigma, a premier business honour society where he represented Brock at a student leadership forum in Indianapolis. The Dean’s Medal for the Goodman School of Business was awarded to Stephen Enns. Among the other notable graduates was Ontario Deputy Fire Marshal Jim Jessop, who received his MBA.

Thursday’s Excellence in Teaching award recipient was Professor Wesley Helms, who joined the Goodman School of Business in 2011.

In his address to the graduands, Helms compared the next chapter of the students’ lives to the sometimes-challenging task of learning to ride a bicycle as a child.

“The falls taken while learning to ride a bike are a lot like the failures we experience when pursuing our careers,” he said. Helms told parents to “get out of your graduates way and support their ambitions,” but reminded the grads that they will “benefit greatly by engaging your parents in their assessment of risk.”

He said the graduates have the support of their parents, and the University as they move forward in their careers.

“Although we don’t say it enough, please know we believe in you, we are grateful for the opportunity to have taught you.”