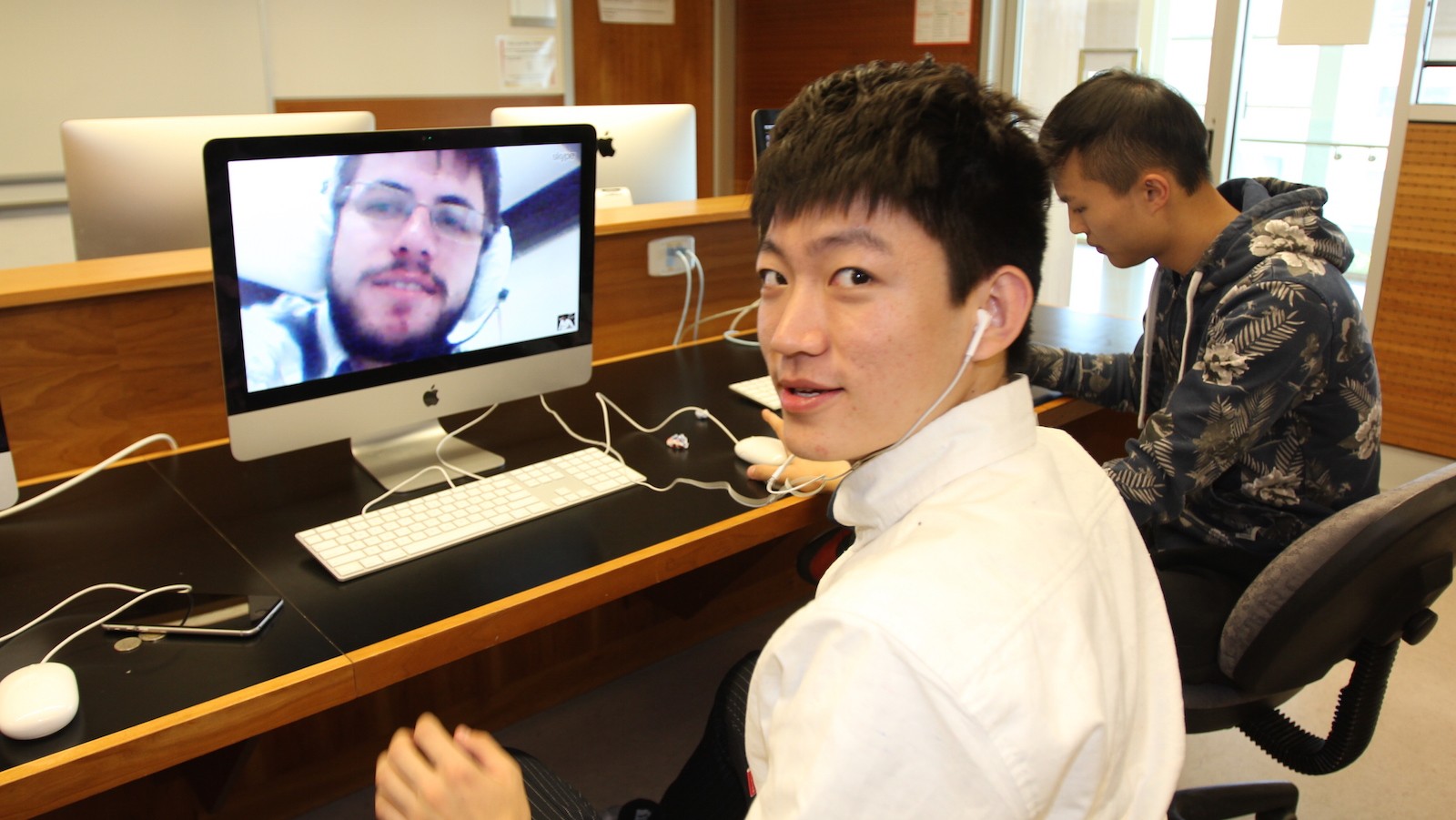 Brock student Tanghui (Eddie) Liu practises his English with a student at a university in Brazil using a program called Teletandem that allows the students to converse face to face. Brock student Tanghui (Eddie) Liu practises his English with a student at a university in Brazil using a program called Teletandem that allows the students to converse face to face.

For five weeks this spring, 20 Brock students turned up at a Plaza language lab, booted up computers and set about to improve their English-speaking skills.

Their lessons, however, took them beyond Brock’s campus, and connected them with fellow university students more than 8,000 kilometres away.

The students, part of Brock’s Intensive English Language Program, were meeting virtually with others from the Universidade Estadual Paulista (UNESP) in Sao Paulo, Brazil.

Together, they spent 30 minutes every Tuesday practising their English and learning about life in their respective universities, countries and cultures through an online program called Teletandem, which let’s the students see each other while conversing.

“It’s been a lot of fun so far and we’ve really appreciated both these groups’ efforts,” said Jim Papple, academic co-ordinator of speaking in ESL Services. “Having someone to have a conversation with on the other end is really thrilling.”

The five-week session, called In Tandem: A student language and cultural exchange, was a pilot to create more engaging opportunities for students to work on their English and succeed at Brock.

It came to be thanks to the success of Science Without Borders, a Canadian-Brazilian scholarship program that sees the Brazilian government pay to send its students abroad to study, intern and conduct science research in Canada.

Brock has partnered with UNESP in that program, making it easy to collaborate on other educational opportunities, such as In Tandem, which involved UNESP Prof. Ana Cristina Biondo Salmão.

The Brazilian students are in their third or fourth year of studies, while the Brock students are going into their first at the University. While they have life skills to offer, Brock students have language to share in return, Papple explained.

In Tandem has given Brock student Abigail Yao an experience she wouldn’t have gotten in any of her business classes. She also made a friend with whom she’ll stay in contact to continue the English lessons after the program ends.

“My friend is beautiful, very funny and very talkative,” Yao said. “I enjoy the time with her. It’s also improved my English-speaking skills because in class, we don’t have time to speak a lot. I’ve benefitted a lot from this class.”

Instructor Jun Du said the sessions became the highlight of the week for students here and in Brazil.

“They’re excited for it every Tuesday,” she said. “If a Brazilian student can’t be reached, they’ll reschedule. That tells us they’re enjoying it, too.”