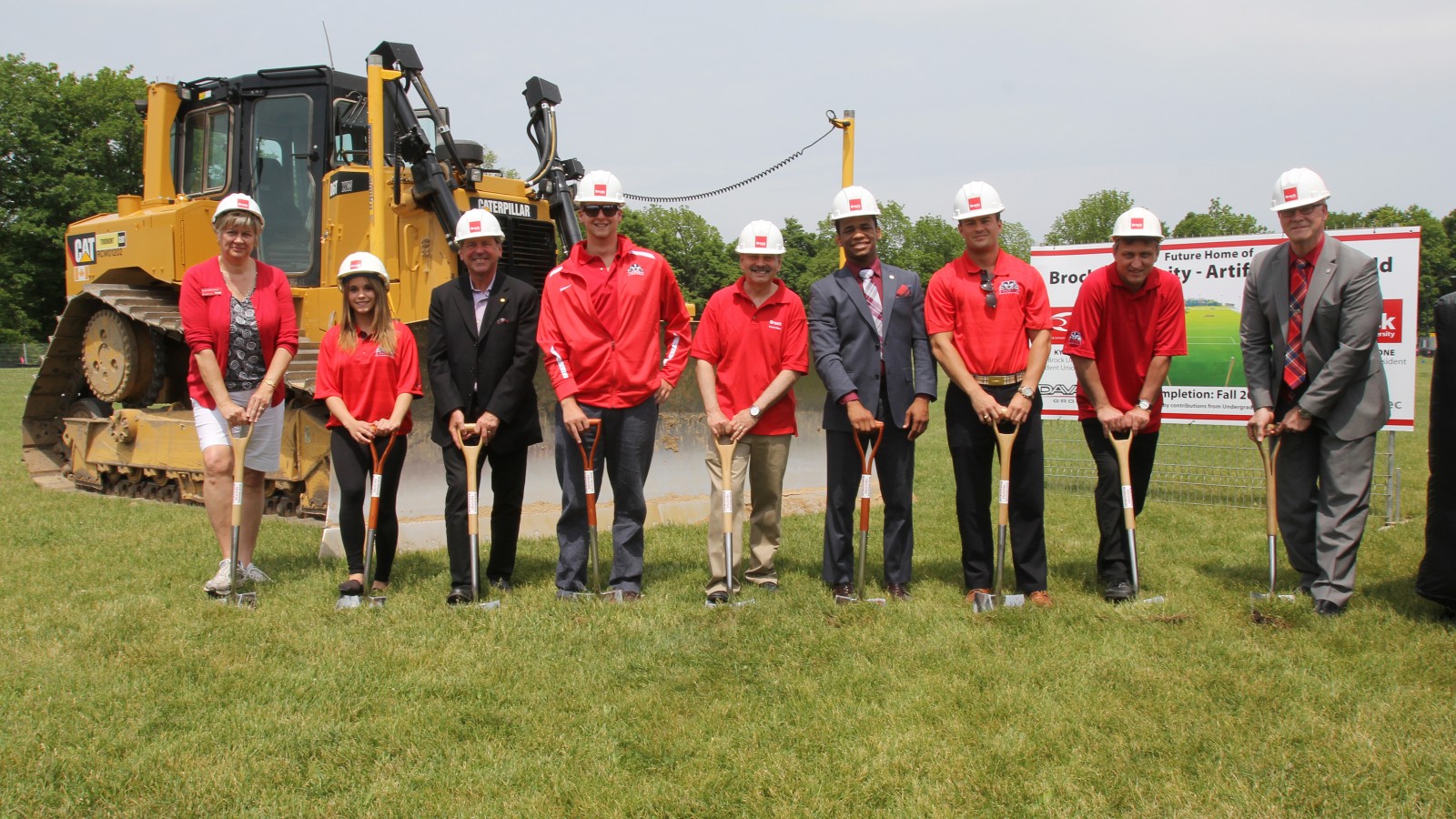 Brock University officials turn the sod to kick off construction of a new artificial turf field. Brock University officials turn the sod to kick off construction of a new artificial turf field.

The outdoor sports season is about to get longer at Brock University.

The Niagara institution unveiled plans Friday to replace its existing grass lacrosse field with artificial turf. Construction will start immediately on the field, which will be used by hundreds of intramural athletes, as well as varsity teams and the community.

“We are incredibly excited to see Brock’s artificial turf field taking shape,” said Brock University Interim Director of Athletics and Recreation Robert Cargnelli. “It will provide more recreational opportunities for Brock students such as expanded intramural programming, and it will enhance the competitive and high-performance environment and promote wellness on campus. In this way, it aligns perfectly with the mandate of the newly formed Athletics and Recreation department.”

The construction project includes installing a regulation-size 66 x 126 metre turf field, as well as a full, six-standard lighting system to allow for night use. At the centre of the field will be a massive 9 x 9 metre Brock Badgers logo.

Puslinch, Ontario-based Davan Group, a well-respected builder of artificial turf fields, won the project contract after a competitive bid process. The $1.5 million project is being funded through the Brock University Students’ Union and a generous donation from an anonymous Brock alumnus.

The target opening date is September 19, which is just in time for Brock’s homecoming celebrations.

The new field will primarily be used by the nearly 7,000 Brock students who participate in intramural sports ranging from soccer to ultimate frisbee and flag football.

The Brock Badgers soccer, rugby and lacrosse OUA varsity teams will also use the new field for their home games.

“It will impact the recruitment process, the training and ultimately will enrich the experience these players will walk away with,” he said. “It also has a potential to raise our community interaction further, which is a way to invite back our alumni, offering them opportunities to give back to the institution and Niagara region.”

“We believe it will create an amazing home game atmosphere. To be able to practice and play on campus and on a turf field is a huge step forward for us,” he said. “A field for us Badgers to call our own will help tremendously with the recruiting process and will provide opportunity to host championship events creating a buzz here in the Niagara Region.”

When not being used by Brock students, the field will be available for community rentals.

“Our mandate is to provide recreational access and drive health and wellness across campus,” Cargnelli said. “However, we are already soliciting interest from external groups to rent the field. We will likely focus efforts on renting the field during Brock’s slower times in the spring and summer.” A large crowd gathered to hear the announcement of a new artificial turf field being built at Brock University.