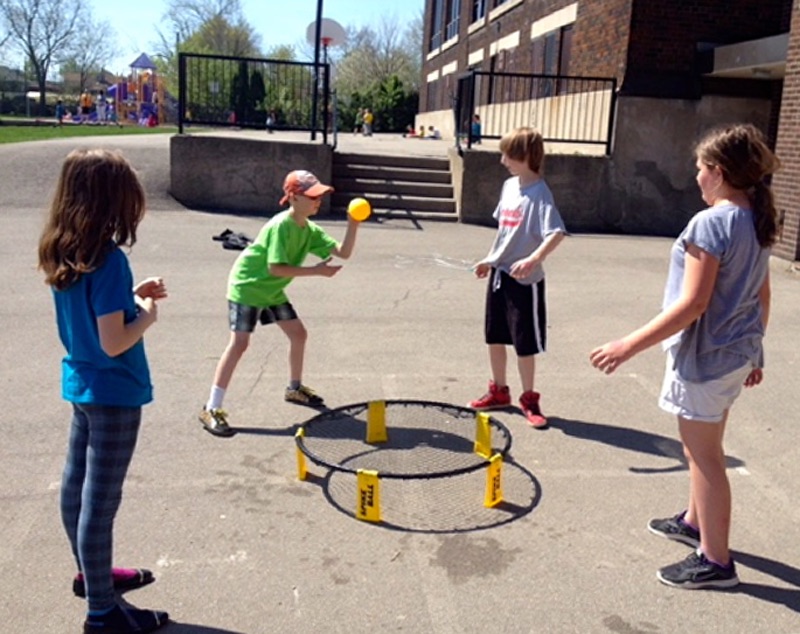 Students play spike ball, an activity created for thanks to Lauren McNamara's Recess Project and funding from Canadian Tire Jumpstart. Students play spike ball, an activity created for thanks to Lauren McNamara's Recess Project and funding from Canadian Tire Jumpstart.

Recess for students at seven elementary schools is a lot more fun thanks to Lauren McNamara and her Recess Project.

They now have clubs to join in winter and organized outdoor activities in which participate when the weather warms. It’s because the Child and Youth Studies professor has worked for four years to make school day breaks more inclusive and enjoyable – even if the students’ idea of fun is doing 100 push-ups during fitness bootcamp.

“We go with what kids want and the No. 1 thing, especially with winter, is clubs,” McNamara says. “Dance club, drama club, magic club, yoga, zumba, crafts, fitness bootcamp, amazingly. I was surprised at the interest in that.”

But McNamara isn’t surprised at the reason why students want to do more than stand outside, huddled in a doorway, waiting for the bell to ring and recess to end.

If it sounds far-fetched that any child might not enjoy recess, it’s not. McNamara often noticed children wishing away their breaks, which prompted her to start the Recess Project. She recruited Brock students to serve as activity facilitators and volunteers, and has since taken the program to five Niagara and two Hamilton schools, making recess as important to the school day as math class.

At the same time, the project offered research opportunities for McNamara and her students.

McNamara and crew organized sports – a game of dodge ball, it turns out, is the way to junior and senior students’ hearts – for those who might feel awkward having free range in their free time. And they provided equipment to those who are more comfortable with independent play but just need a bit of inspiration, or reassurance they won’t be bullied. Play ultimately gave children a way to safely express themselves.

That money has enabled McNamara to buy equipment and supplies, hire facilitators and, most recently, a regional co-ordinator to help her run the recess project, which more schools want to join every year.

McNamara has seen more than students change over the years as they become more connected with their school community by getting active. Teachers are volunteering to take on clubs, and not as part of their regular supervision duties, but in addition to them instead because they see the positive effect on their students and want to be part of it.

“That’s what we want so this sticks,” McNamara explains.

“I really think (Canadian Tire Jumpstart) has been so generous,” she adds. “They’re our only source of funds and we couldn’t have done it without them. They’re keen on promoting physical activity in schools, which has such a positive effect on kids and their academic performance.”