Top honours handed out to grape and wine industry promoters 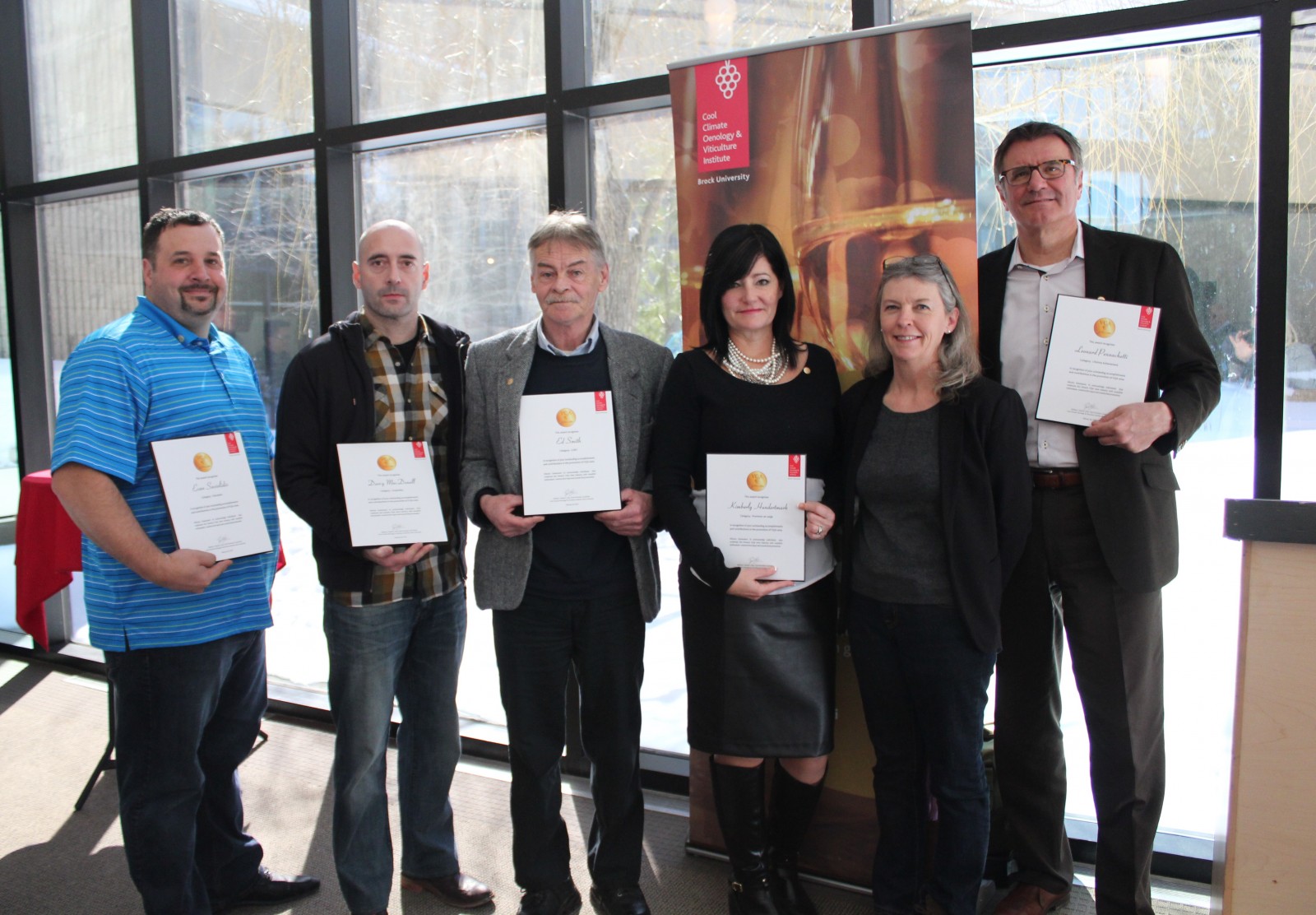 During a weekend celebrating excellence in Ontario wine, eight individuals were recognized for their contributions to growing and promoting the province’s grape and wine industry.

The award winners were revealed at the Cuvée Grand Tasting Feb. 27 at Fallsview Casino Resort. Organized by Brock University’s Cool Climate Oenology and Viticulture Institute (CCOVI), the event is one of the largest celebrations of Ontario VQA wine.

Niagara-on-the-Lake grape grower Don Forrer was honoured with the Cuvée Vineyard of Excellence Award sponsored by BASF Canada Inc. The award recognizes a grower who promotes excellence in their vineyard practices. The winner is chosen by an expert panel that makes field visits throughout the growing season to monitor quality.

The Tony Aspler Cuvée Award of Excellence was presented to Laurie Macdonald, executive director of VQA Ontario, for overseeing the development of a provincially regulated appellation system with grace and humanity.

The 2015 VQA Promoter Award winners were also announced at Cuvée with the awards being presented Saturday, Feb. 28 at CCOVI’s Experts Tasting held at Brock University. The awards acknowledge individuals who celebrate through promotion and/or education the Ontario VQA wine industry with unselfish enthusiasm, constructive input and unsolicited promotion.

Len Pennachetti, this year’s recipient of the Lifetime Achievement Award, took the Feb. 28th award ceremony as an opportunity to reflect back to 40 years ago when he was one of the first growers to start planting Vinifera vines in Niagara.

“Those of us who were already growing Vitis Vinifera in Niagara knew that it could be done,” Pennachetti said. “And sometimes I have to pinch myself when I come to events like last night (Cuvée) or here today and see what we have been able to achieve as an industry, and that’s because of innovation that we have completely transformed the Niagara peninsula.”

The 2015 VQA Promoter Award winners in each category are:

· Education: Evan Saviolidis, sommelier and wine educator
Saviolidis was recognized as a dedicated educator who is passionate about Ontario VQA wines and has instilled this passion to a new generation of students through the courses he runs as well as his work educating consumers about Ontario VQA wine at the Wine Country Ontario events booth.

· Hospitality: Darcy MacDonell, owner/operator of Farmhouse Tavern
MacDonell was recognized for taking the step of only serving VQA wine and Ontario craft beer at his restaurant the Farmhouse Tavern. Making such a commitment to VQA wine has created a robust offering of local selections strongly solidifying the case that great wine grows in Ontario.

· Media: John Szabo, partner and principal critic at Wine Align
Along with doing restaurant and private consulting, teaching, and speaking engagements, Szabo has become one of Canada’s key wine writers, which is why he was honoured this year. Although he writes about wine regions all over the world, when he speaks about Ontario VQA wine he is a credible advocate for the industry.

· Lifetime Achievement: Len Pennachetti, president and co-founder of Cave Spring Cellars
Pennachetti was recognized for his dedication to the Ontario industry from his early days as a producer and advocate to his work today as one of the senior leaders at the Wine Council of Ontario. He has also worked tirelessly to establish Niagara’s Twenty Valley as a visitor destination, volunteering his time, his property and talents to guiding its development.