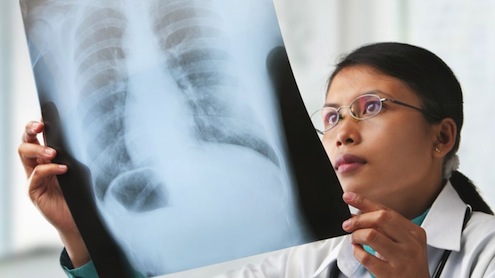 The American Society of Clinical Oncology (ASCO) is including research by Brock epidemiologist Martin Tammemägi in its review of the most important cancer research conduced in 2014.

Tammemägi’s May 28 paper “Impact of lung cancer screening results on smoking cessation,” published in the JNCI: Journal of the National Cancer Institute, “is featured as one of the year’s major achievements in clinical cancer research and care” in Clinical Cancer Advances 2015: ASCO’s Annual Report on Progress Against Cancer, ASCO’s annual review of progress against cancer and emerging trends in the field, says the society

“It’s a great honour to be recognized by fellow cancer researchers and oncologists,” says Tammemagi. “The American Society of Clinical Oncology is one of the top-ranking cancer oncology organizations in the world.”

In that study, Tammemägi and colleagues used data from the U.S. National Lung Screening Trial on 14,621 current smokers, 55 to 70 years old, with a 30 or more pack-a-year smoking history and who had smoked during the last 15 years.

For smoking information, the authors used the results of annual study updates starting at one, two, and up to seven years later. Researchers found that the more serious the screening result, the greater the likelihood that smoking stopped. In addition, the effect appeared to be durable, lasting up to five years after the last screening.

“People start taking seriously that their health is in danger and they might die,” says Tammemägi of his research’s impact. “Following the abnormal screening they are somewhat shocked into confronting reality. That scare is enough to motivate them into seriously attempting to quit smoking.”

Tammemägi is also co-author of another paper that the American Society of Clinical Oncology is including on its list of 2014’s most important cancer research.

“Benefits and Harms of Computed Tomography Lung Cancer Screening Strategies: A Comparative Modeling Study for the U.S. Preventive Services Task Force,” published March 4 in the Annals of Internal Medicine, used a micro-simulation model to describe the most effective ways of applying Computed Tomography screening for lung cancer in groups of people.

That research, conducted by the Cancer Intervention Surveillance Modeling Network (CISMN), enabled the U.S. Preventative Services Task Force to make recommendations in favour of lung screening. Tammemägi is an associate member of the CISNET Lung Group.

As of January 2015, under the U.S.’s Affordable Health Care Act, health insurance companies in the US have to pay for the cost of lung screening of qualified individuals between the ages of 55 and 65 years.