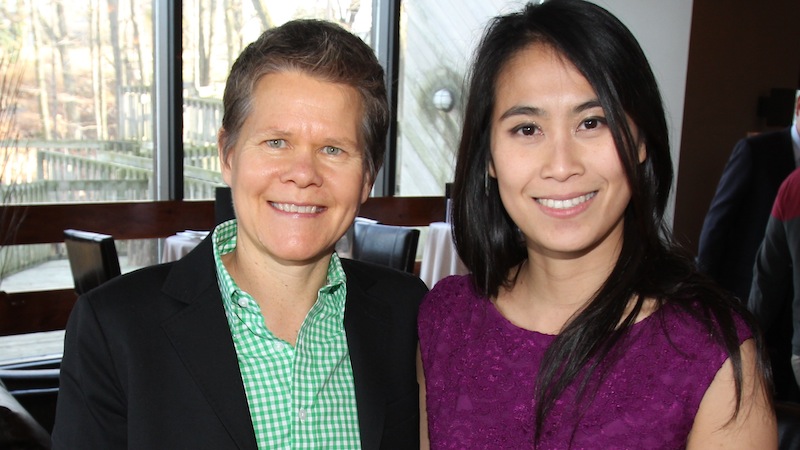 This year’s recipients of the Brock University Tribute to Teaching awards share similar philosophies in the classroom.

Both Lydia Chen and Paula Gardner prefer a hands-on approach when it comes to getting their message across.

For Gardner, who won the Brock University Award for Excellence in Teaching for Early Career Faculty, “experience is at the root of understanding.”

Whether it’s bringing in a guest speaker or going into the community for research projects, the Department of Health Sciences professor brings experiential learning into the classroom as much as possible.

“That’s at the root of their learning and that’s what they’re going to take away,” Gardner said. “They’re not going to remember a lot of what they learn in terms of theory, but the practical application of it I think sticks with them long after they’ve left me.”

Gardner’s award recognizes the contributions to teaching undertaken by a new faculty member who is in the first five years of a tenure-track position.

The second-year professor at Brock worked previously as a research scientist and taught in New York City.

“I think Brock has an amazing cadre of very skilled and passionate educators,” she said. “To be recognized among your peers is a great honour, and I feel really grateful to be here at Brock.”

The 10th annual awards were held at Alphie’s Trough Thursday afternoon. Winners were nominated by any member of the Brock community and submitted dossiers detailing their backgrounds and teaching philosophies. The nomination packages were adjudicated by a committee consisting of faculty members from each Faculty and chaired by the Centre for Pedagogical Innovation.

“To give this to someone like me is an extraordinary honour, but it shows me that this is a school that puts a lot of resources into teaching,” said Chen, a second-year professor in the Department of Chemistry, who received the Don Ursino Award for Excellence in the Teaching of Large Classes. “So not only am I on the right path, but I’m in the right place.”

The Don Ursino Award is conferred on an outstanding teacher who demonstrates commitment to the improvement of student learning in a large class.

While obtaining her PhD at the University of Alberta, Chen realized her passion was not only research, but also communicating that knowledge.

She started a chemistry outreach program for Grade 5/6 students in Huntsville last year and wants to bring it to Brock through a service-learning program.

According to student letters of support, Chen is she is known for her passion and enthusiasm, her efforts to personalize learning, and her engaging lecture demonstrations.

“I find science in general exciting, but that’s not necessarily a common concept for the public,” she said. “I think more people would be drawn in if they’ve been inspired early on, especially at elementary school, then high school, and finally when they’re deciding where they should go, to Brock. They have seen experiments being done by Brock University and students and a professor who is excited about research.”