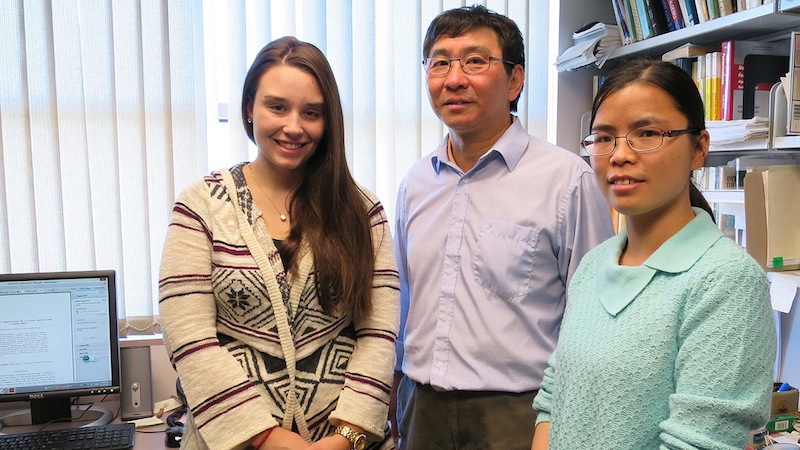 Brock graduate student Vanessa Hamilton likes the logic and reasoning of mathematics. It’s what drives her academic and research interests.

“I like the fact that math is black and white,” says Hamilton.

Hamilton completed her undergraduate degree at Brock in the spring and began her master’s work in September. She was awarded a prestigious NSERC graduate scholarship to support the research she has underway in the area of algebraic codes from matrix and group rings.

She admits there is no easy way to describe her research to non-specialists – it’s based in the pure science of algebraic structures.

Hamilton and Hongdi Huang, an international master’s student in the program, had the opportunity to meet world experts in their field this summer when Brock hosted the 2014 Brock International Conference on Groups, Rings, and Group Rings.

They were among 18 graduate students invited to the conference that involved approximately 50 of the world’s top mathematicians in the field of group rings. The conference participants represented 19 countries from four continents, making it the first major international meeting in algebra to take place at Brock University, says event organizer Professor Yualin Li.

As the graduate supervisor for Huang and Hamilton, Li says holding the conference at Brock provided his students with a rare opportunity to connect with experts in this highly fundamental field involving both theoretical and computational work in pure mathematics.

While both students assisted Li with some of the conference tasks, Huang had the added opportunity to present a talk, entitled On (5,18) groups, about a project she is jointly working on with Li.

“It was a precious opportunity to present my research in front of many world famous specialists who have very important influence on their areas,” says Huang. “What’s more, I learned numerous interesting topics that deserve further research. That expands my horizon and gives me some reference to choose the possible fields to study a PhD degree.”

Hamilton says she felt privileged to have this kind of conference experience as she begins her master’s studies.

“Since I’m just starting my graduate studies, this was a special experience for me. I came away from the conference with a greater appreciation of the scope of work underway in my field and a better understanding about how I can make an important contribution through what I do as a researcher.”