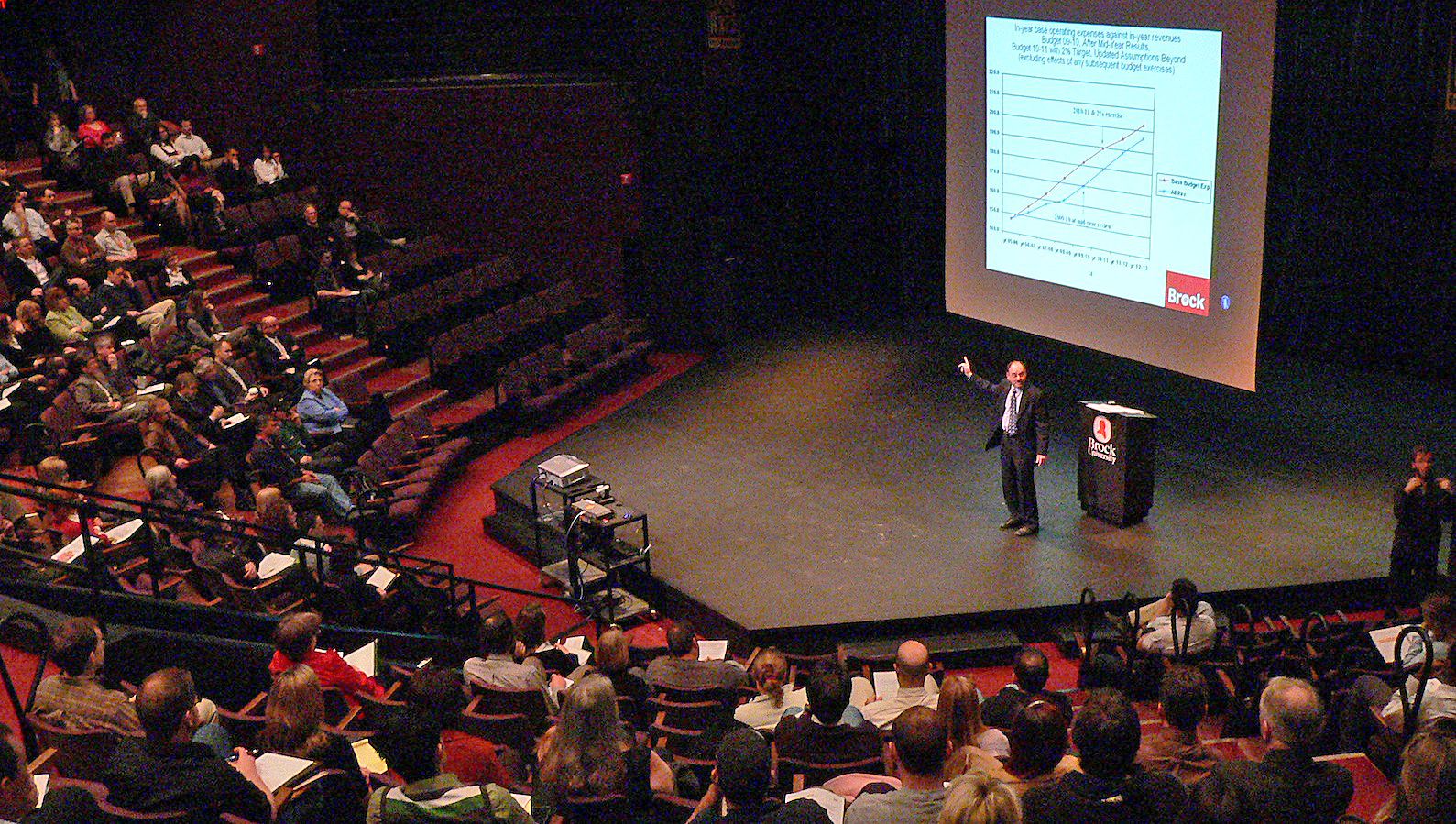 Brock University officials held a town hall meeting with staff and faculty members April 9 to discuss steps being taken to cut this year’s operating deficit from $14.5-million down to $7-million, and also to talk about another tough year to come in 2014-15.

About 500 people filled the Sean O’Sullivan Theatre to near-capacity for two hours of a detailed presentation and an open question period. Another 250 in the David S. Howes Theatre watched the meeting live-streamed, and about 200 people logged on to view it via webcast.

The most significant impact has been in lost jobs, and through a variety of measures including attrition, redeployment and layoffs.

Brock has been incurring annual operating deficits averaging $7 million for the past six years, offsetting much of the funding shortfall through increasing enrolments.

But with limited space left to grow, tuition rates capped at 3 per cent for domestic students, and domestic government funding cut by 1 per cent each year for the past two years, the University has experienced expenses in excess of revenue. Going into the next academic year, 61 per cent of the University’s revenue is regulated to only increase 0.6 per cent.

Brian Hutchings, Vice-President of Finance and Administration, said if Brock’s current operating model were left unchanged, the University would become insolvent as increasing deficits hit $20 million in 2014-15 and surge past $30 million the following year.

Like all Ontario universities, Brock has had to use millions in operating money to cover shortfalls in its pension fund; in 2013-14 that cost Brock $5.8-million. Other big hits were:
• $4.8 million for utility bills, operating costs and debt repayment on the Cairns Family Health and Bioscience Research Complex;
• $2.5 million needed for deferred maintenance on other infrastructure; and
• $2.5 million in Ontario government funding cuts of various forms.

In the last year as the University sought to find new efficiencies, it introduced measures like a six-month delay on hiring, reduced administrative travel, encouraging employees to buy additional vacation and deferring non-essential equipment purchases.

But in an organization where nearly 70 per cent of its $300-million budget is personnel costs – salaries and benefits – Hutchings said job cuts are unavoidable. Brock is one of Niagara region’s biggest employers, with more than 5,500 employees in 2013.

The University has announced that 86 positions will be eliminated. So far 40 have been met through voluntary resignation or retirement, another nine full-time staff have been redeployed to existing vacancies, and 10 people have seen their employment with the University come to an end. So far all eliminated jobs have been from administration ranks. A review of the University’s academic programming is ongoing.

As it enters the 2014-15 fiscal year, the University will look for opportunities to address the remaining 27 positions through attrition, redeployment and, where necessary, layoffs. Despite these reductions, the University continues to be an estimated $5.67-million short of reaching its mandated target of a balanced budget in 2014-15.

Hutchings said the University has no choice but to change its operating model.

“Restoring our financial stability will not be easy,” he said. “Working together as a community, we will find ways to create some growth, and we will also make some difficult decisions.

“We will get it done, we will restore our financial health. But it will not be painless, and nobody is pretending otherwise.”

During the Town Hall, Brock also announced a new website has been set up as the main update centre for information regarding budgets, people impacts and collective bargaining with the union locals that represent University employees.