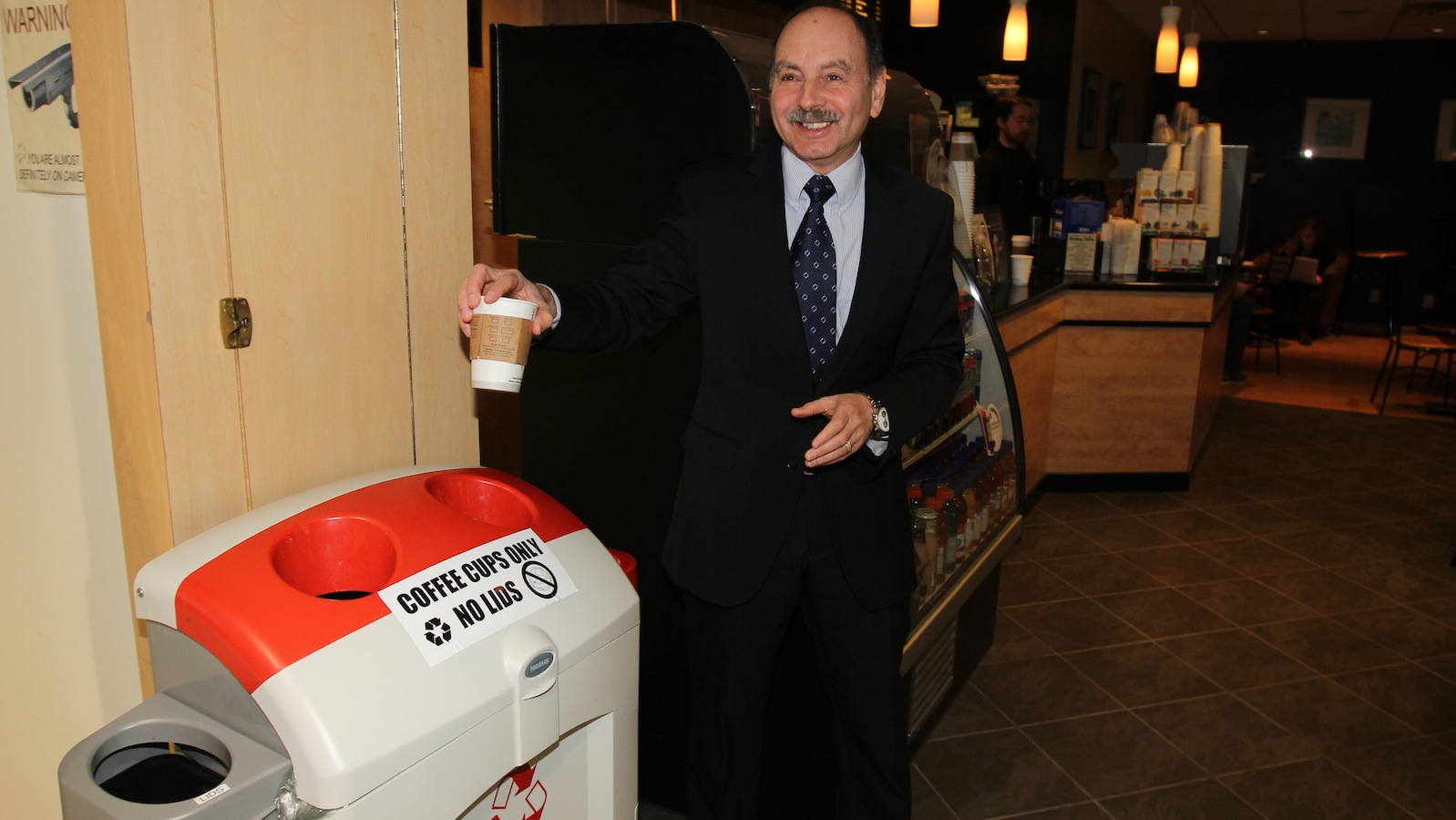 Brock President Jack Lightstone discards a coffee cup into one of the new recycling stations.

When it comes to Brock’s undeniable love affair with coffee, the numbers don’t lie.

According to this year’s annual waste audit, in 2013 the University generated an astounding 32 tonnes of waste in coffee cups alone.

But there’s a disappointing underside to these startling numbers. Although the Brock community generated 32 tonnes of used coffee cups, it recycled barely one tonne of that waste.

“We have to do a better job of recycling here at Brock,” says Saint-Ivany. “It’s one of the simplest things we can all do to help our campus become a more sustainable and environmentally-friendly campus.”

“The rate of recycling for coffee cups at the University is just 2.7 per cent,” says Domenic Maniccia, director of custodial services. “We’d really like to see that number at the 20 per cent mark. And I honestly believe that that’s a realistic goal.”

Signs of change are already apparent on campus.

Today, Brock announced the results of its annual waste audit for 2013 and the institution’s results have improved to a 65 per cent diversion rate. This is a five per cent increase in overall recycling from a rate of 60 per cent recorded in 2012.

Additionally, the 2.7 per cent rate for coffee cup recycling in 2013 is a modest improvement from 2012. That year’s waste audit found that the University community was recycling just 1.5 per cent of its wake-up juice containers.

To help the Brock community make positive steps towards achieving its 20 per cent target for coffee cup recycling, the University is undertaking a number of initiatives.

These new receptacles help to reduce the volume of waste by “stacking” discarded coffee cups. The stacked cups are then collected and disposed as recycled material. A “Please stack your coffee cups” poster is also being distributed electronically to offices across campus in order to raise awareness about the initiative.

The other encouraging sign, when comparing this year’s to last year’s numbers, is that the overall amount of coffee cup waste produced at Brock is declining.

In 2012, the University generated 58 tonnes of coffee cup waste. This year’s total of 32 tonnes is nearly half the amount of the previous year.

“We’re not going to meet our goal by recycling alone,” explains Maniccia. “Other options like re-usable coffee mugs are paramount to helping us reduce the amount of recyclable waste that is, otherwise, making its way into our landfills.”

“This is really a call to action. This is everyone’s responsibility,” adds Saint-Ivany. “We can only reach our targets if everyone pitches in and does their part.”