Mother and two children graduate together 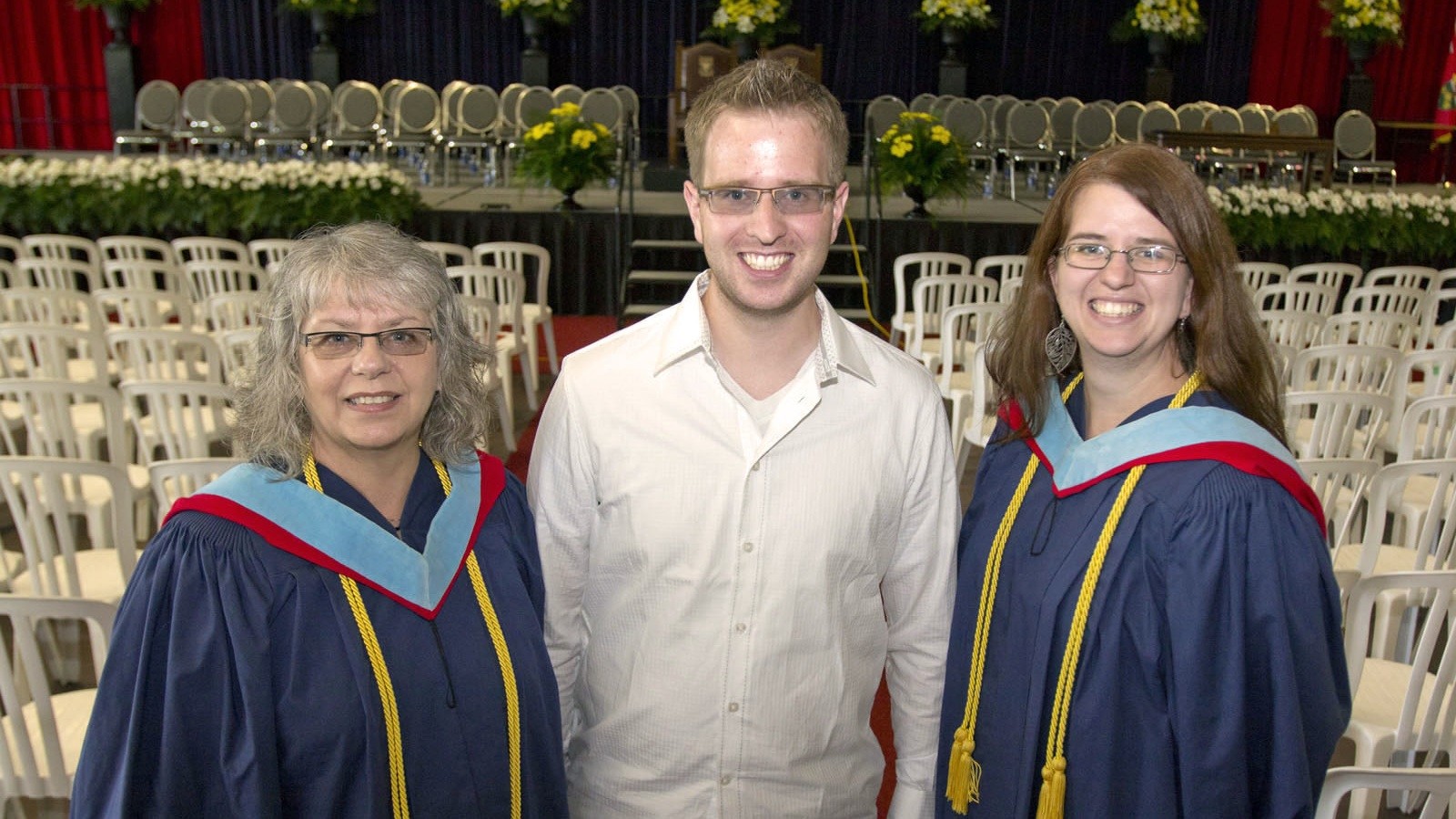 Mary Jane Bauer (left) and her daughter Lindsay graduated with their Bachelor of Education degrees Wednesday morning. Bauer's son Kelly (centre) graduates with his Bachelor of Science from Brock on Friday. Mary Jane Bauer (left) and her daughter Lindsay graduated with their Bachelor of Education degrees Wednesday morning. Bauer's son Kelly (centre) graduates with his Bachelor of Science from Brock on Friday.

Mary Jane Bauer has plans for her newly earned Bachelor of Education degree.

She’ll use it to launch into graduate studies next fall. But first, Bauer wants her high school guidance counsellor to get a load of the embossed piece of paper that she was handed Wednesday morning during the Faculty of Education’s convocation ceremony.

Turn the clock back to the 1970s when Bauer was graduating from high school with a 74 per cent average. Bauer recalled she was told by her guidance counsellor that she shouldn’t bother with university, given her grades. She should become a secretary instead.

She started by getting her diploma in furniture renovation. Still, her childhood dream was to become a teacher – her stuffed animals served as her students when she’d play school growing up – so she wasn’t content to stop there.

In the 1980s, she studied early childhood education, only to realize she wanted to teach adults and used what she learned to train school bus drivers how to operate a bus and work with children.

These days, she’s a training and development analyst for the Ministry of Transportation, creating standards for driver training. And now, she can call herself a university graduate with a degree in adult education. She is also working toward her degree in aboriginal adult education.

“(My high school guidance counsellor) is going to get a copy if she’s still alive,” Bauer said as she looked at her degree. “I spent 20 years driving high school students and I always told them nobody can tell you that you can’t do something.”

The success of proving her guidance counsellor wrong was made that much sweeter by the fact that Bauer graduated Wednesday with her daughter Lindsay, who got her degree in aboriginal adult education and walked across the same stage as her mother.

And on Friday, Bauer’s son Kelly will graduate with his Bachelor of Science in chemistry from Brock.

“I’m pretty excited. They might not think it’s so great,” Bauer said with a laugh.

“It’s kind of weird to think you’re up there with your mom,” Lindsay admitted. “It’s strange. I just walked across the stage with my mom. We’re proud of her and it’s something she always talked about. It’s cool to say we’ve accomplished this and so has she.”

The family, hailing from London and Chatham, didn’t originally plan it this way. But once Bauer figured out both her children would be graduating in the same year, she doubled up her courses so she could join them.

Board of Trustees Spirit of Brock medals were awarded to May Al-Fartousi (graduate) and Jeff White (undergraduate). White also received the Education Dean’s Medal for academic and professional excellence in the Teacher Education program.

Prof. David Hutchison in the Department of Teacher Education received the Faculty Award for Excellence in Teaching.