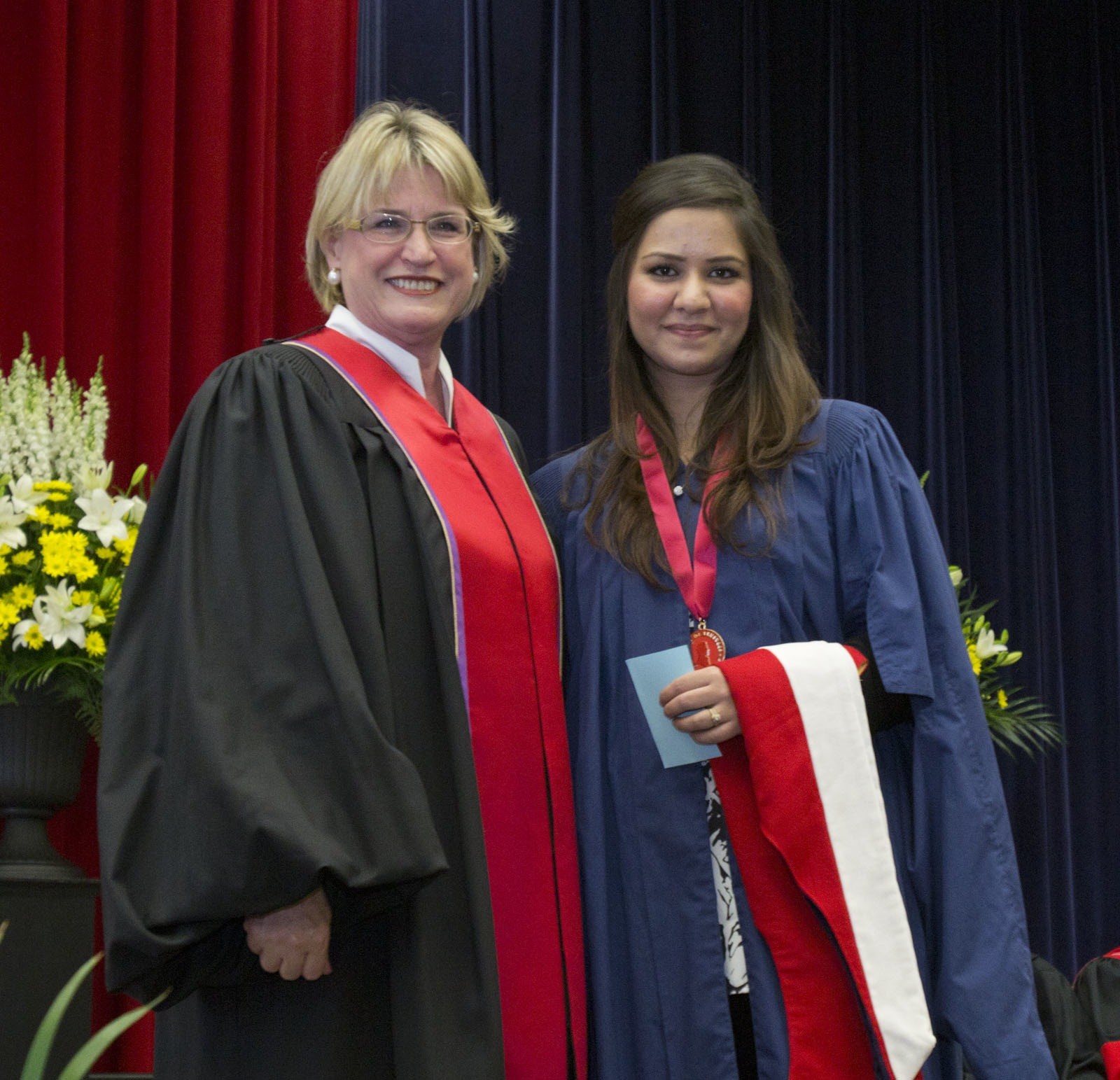 Binish Ahmed had enough fodder to write a 140-page research paper so she could graduate with her master’s degree in political science Thursday.

But she was hard-pressed to find the words to describe how she felt being presented with the Spirit of Brock medal during the Faculty of Social Sciences convocation ceremony Thursday morning.

“It’s hard to take it in,” Ahmed said afterward. “I don’t know how to describe it. I’m still processing it.”

The medal, awarded by the Board of Trustees, recognizes students who demonstrate leadership, courage, innovation, inspiration and community involvement during their studies.

Though Ahmed struggled to find words, there was no shortage of reasons why she received the medal.

Ahmed, one of 339 graduate students to receive their degrees this spring, served as the political science representative with the Graduate Students’ Association, helping to plan and organize events.

She was the “driving force” behind the Department of Political Science’s first graduate student conference last year, bringing together student researchers from five Ontario universities.

Ahmed worked with the RAFT, which helps homeless and at-risk youth in Niagara. She served as a community connector in the Old Pine Trail neighbourhood in St. Catharines, eventually producing a report for Niagara Regional Housing with recommendations for action that are currently underway in the community.

She and her husband Adnan Syed, who graduates with his MBA on Saturday, established a Niagara chapter of Visions of Science Network for Learning, which engages disadvantaged youth in science.

“Binish personifies the kind of spirit that we would like to develop at Brock,” said trustee Helen Young when presenting Ahmed with her medal. “She has truly made all of the communities that she has touched better places in which to live and learn.” Danielle Brunetti (right) received the Spirit of Brock medal (undergraduate) From Betty-Lou Souter, of the Board of Trustees, at the Faculty of Social Sciences convocation ceremony Thursday afternoon.

For Ahmed, it wasn’t work but a source of inspiration, helping her feel energized when it came time to tackle her master’s research.

“This is what we do in our leisure time,” Ahmed said. “I really enjoy it.”

Her final research paper investigated why a large number of immigrants choose not to settle in Niagara.

She pored over hours of interviews with immigrants and support agencies, hearing stories of difficulty accessing employment, experiencing “economic demotion” when their credential weren’t recognized, and racism.

But she also heard about how new Canadians appreciated Niagara’s beauty, its proximity to the U.S., affordable housing and easy traffic.

“People want to have families here and stay here,” she said.

Still, as she listened to her achievements listed before an audience Thursday for an award for which she reluctantly applied, Ahmed admitted feeling uncomfortable by it all.

“This is work I don’t really do as work,” she explained. “This is what I’m having trouble grappling with because I don’t think I’m doing anything extraordinary.”

If anything, Ahmed said she hopes it will change how people view students and perhaps help students “connect the dots in their own journeys.”

“When we see students in a different light and what they contribute, you see so much more,” she said.

Ahmed was one of about 865 students who graduated during Thursday’s two Social Sciences ceremonies.

Danielle Brunetti received the undergraduate Spirit of Brock medal during the afternoon ceremony.