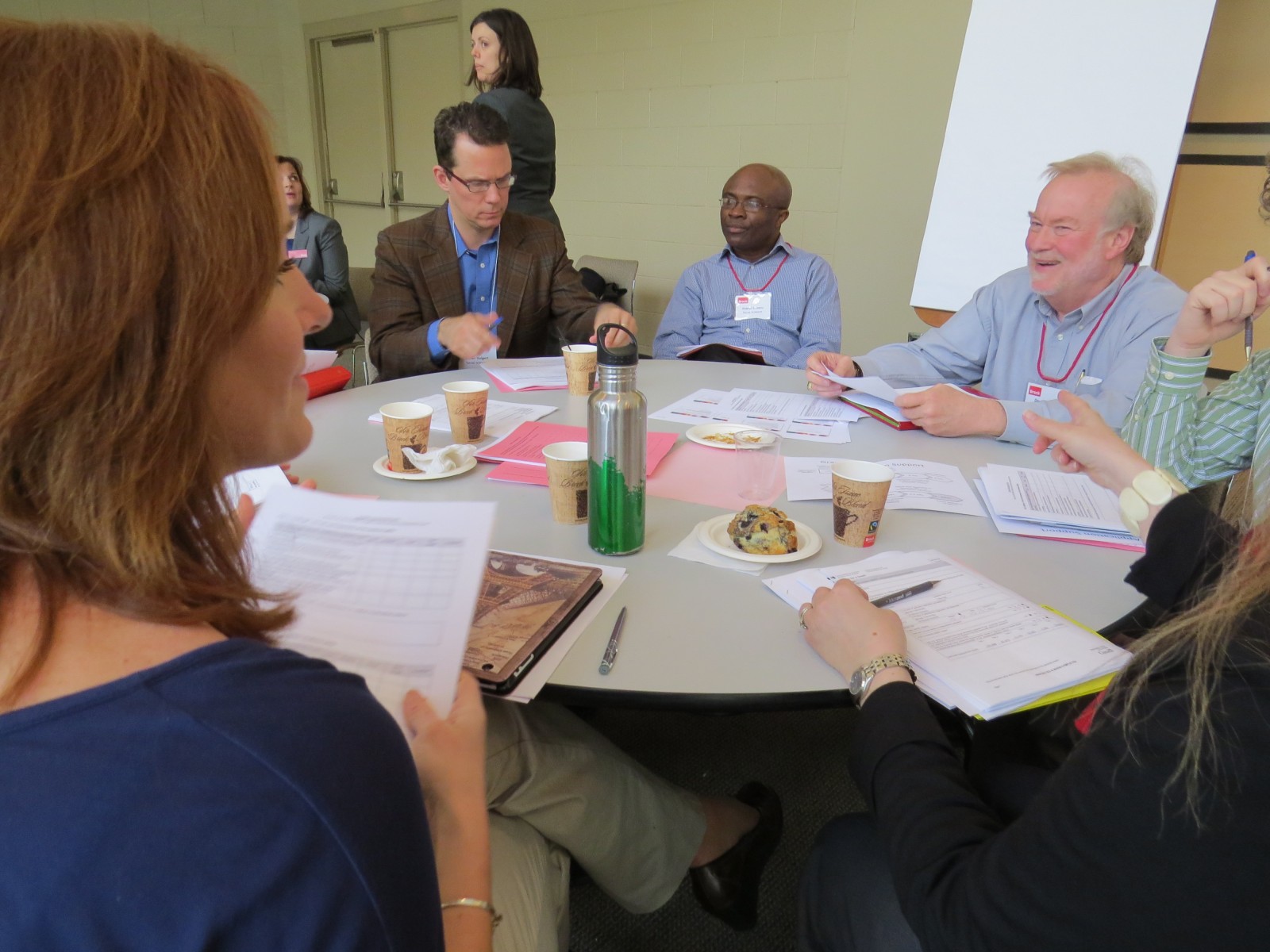 Researches discuss grants strategies and other issues during SSHRC Day on May 13. Researches discuss grants strategies and other issues during SSHRC Day on May 13.

The Office of Research Services (ORS) is setting up a voluntary “peer support” structure for researchers to turn to their colleagues for direction, advice and other support during the application process for Social Sciences and Humanities Research Council (SSHRC) funding and grants.

ORS has also hired students to put together the Common CV for researchers applying SSHRC funding.

And, researchers who received a “4A” ranking on their funding applications are eligible to get a $2,000-grant if they re-apply to the upcoming Insight Grant Competition.

These are among measures announced at SSHRC Day, a workshop held May 13 for researchers to discuss strategies for applying for SSHRC and other research funding.

“We are our own best resource,” Kee said. “Reading through the comments (evaluating the SSHRC Day event), what came out again and again is that people overwhelmingly want a mechanism that will allow us to support one another by looking at each others’ grant applications and showing how these might be strengthened.”

Kee said that the common CV, a highly detailed list of a researchers’ activities and accomplishments that will be required with applications starting in early 2014, is a challenge that can take 20 hours or more to create.

SSHRC represents a major, but very competitive, pot of funding for Canadian researchers in the social sciences and humanities through its connection grants, partnership grants, insight grants and talent grants, each with their different focuses and requirements.

“They are giving fewer scholars more money,” she said. “They are really taking an all-or-nothing approach.”

A panel of researchers who had been involved in SSHRC funding committees, along with ORS staff, shared tips on how to apply for SSHRC and other funding.

Pascale Lapointe-Antunes from the Department of Accounting, who sat on SSHRC’s Insight Development Grant committee in 2011 and 2012, stressed the need for applications to be written clearly and simply.

“So if I take this proposal and I read it and I have absolutely no idea what you’re taking about, then it’s very likely to end up being not funded, so the language is very important,” Lapointe-Antunes said.

Phrasing concepts into easily digestible sentences will go far in a situation where each application has limited discussion, suggested Elizabeth Sauer, with the Department of English Language and Literature.

“So give them the soundbites: highlight the key questions, the key issues that you want them to be able to take away from the application and present to the committee,” Sauer told the gathering.

She noted that creating a website to make research accessible to the broader community would also be very helpful.

And, while keeping SSHRC program officers in mind, make sure to write for your peers, as they have key influence, says David Siegel, with the Department of Political Science.

But he cautioned researchers not to mould themselves and their research into what they think the reviewers want to see, but rather pursue the line of research according to their own interests and plans.

“You can write a better grant if you’re comfortable with this and if this is what you want to do,” Siegel said. “If you try to contort yourself to do something that you’re not particularly comfortable with, that’s going to show in the grant.”

Other advice and tips shared at SSHRC Day include:

• Don’t merely re-purpose an old application
• Don’t over-inflate budgets, as SSHRC is only allowed to cut a budget to a maximum of 30 per cent
• If you are a new scholar, apply for the Insight Development Grant. Seventy per cent of those grants went to “emerging scholars”
• Ensure that your literature review is recent and relevant
• Build alliances with community or non-profit organizations as a way of spreading the influence, impact and “knowledge transfer” of your research on society
• Do not write your application like a “thesis proposal” where everything has been done except for the data collection or running the model.

Research officer Josie Reed said researchers should start thinking about their research plan at least one year before the deadline and suggested coming to ORS for support at least six months before the funding deadline.

“We are your advisers on these matters,” she said. “We are your best cheerleaders. We facilitate your grants. We’re like midwives delivering your research application to the agency.”

Research officer Tressie Dutchyn, whose docket includes SSHRC applications, urged researchers to be persistent with their applications, noting that, on average, it might take two or three times before an application is funded.

“I was once told by an extremely successful researcher that he applies to more competitions than anyone he knows, he gets rejected from more and he is more successful, so the key is not to give up – to keep applying – because eventually you will be successful,” she said.