From Brock to Mars and back: A Q&A with Mariek Schmidt 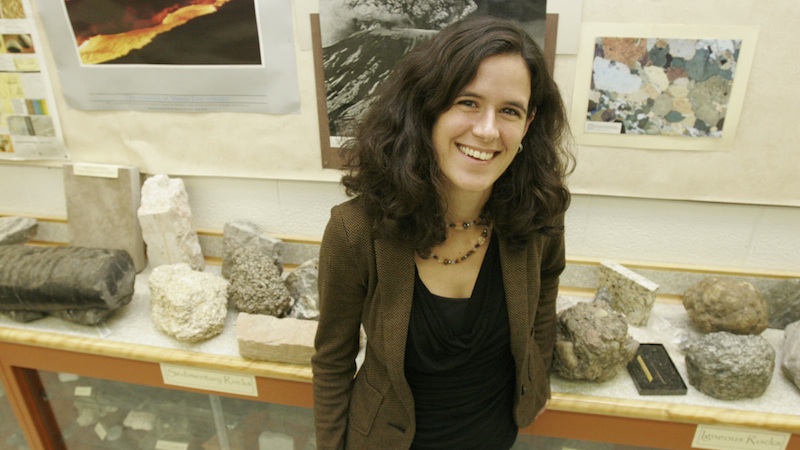 Mariek Schmidt talks to the Brock News about her work with NASA's latest Mars mission and the Curiosity rover. Mariek Schmidt talks to the Brock News about her work with NASA’s latest Mars mission and the Curiosity rover.

Volcanologist and igneous petrologist Mariek Schmidt is one of 400 scientists worldwide monitoring and analyzing data from Mars that’s being collected by the rover vehicle Curiosity, which landed on the Red Planet last August.

She spent a couple of months at NASA’s Jet Propulsion Laboratory, developing plans for the rover to follow a geological route.

Schmidt is back in her Brock office, continuing to analyze the data and participate in developing daily plans for the rover.

BN: Describe what it was like to work with the team in California last year.

Schmidt: We were together for the first 90 sols of the mission. A sol is one day on Mars, consisting of approximately 24.5 Earth hours. The idea was to have the entire science team all together living on Mars time so that we could synchronize communication with the rover and imaging orbiters that orbit Mars once a day.

Mars sols and Earth days are similar that it doesn’t mess with you too much initially, but over the span of a week or two weeks it really changes. It adds up. It’s kind-of like living in another time zone. There will be one week a month when its normal time – you go to work at 8 or 9 in the morning and you work a normal day, and then there are other days where you start at 5 o’clock at night and it’s not so much fun.

At the end of our shifts we’d have these science discussions where everybody got together and we’d talk things through. The best part about being at the Jet Propulsion Lab in Pasadena for the first 90 sols is that I got to work with these really incredibly smart people. We were always talking about science. It’s a really neat environment to be in. It’s an amazing, amazing opportunity and I’m very thankful to be part of this.

Schmidt: Mars is dusty. That dust is generally a pinky-brown colour. It gives everything a pinky-brown hue. There aren’t any plants or animals. We’re not sure if micro-organisms ever existed. There’s water on Mars but not in the form one would normally think. Because the atmospheric pressure of Mars is very low, water is either stable as a solid or gas but not liquid form. There can be groundwater at higher pressures below the surface of the planet.

There is evidence in the landscape – river channels and things like that – that could indicate that water was once present, which means the atmosphere used to be at a higher pressure. Mars is 4.65 billion years old. Mars is very dry, very cold and dusty. The temperature varies during the day from around 0°C to -70°C.

Mars is a basaltic planet, which means that most of the rocks on Mars are rich in iron and magnesium. On Earth, we have oceanic crust and continental crust. Our oceanic crust is composed of basalt, while our continental crust is composed of granites, which are higher in silica. The dominant form of volcanism on Earth is basaltic, but what’s different from Mars is that we have high silica rock mostly due to plate tectonics, which Mars doesn’t have.

BN: What is the purpose of your mission?

Schmidt: What we’re trying to do with this mission is to understand whether or not Mars could have once been a habitable place. There’s been an atmosphere change during the planet’s history, from high pressure to low pressure; we want to know why.

We’re trying to build a coherent history of Gale Crater by piecing the data together. We want to track how rocks change in composition over time. We do this by reading the layers of rock, where the youngest rocks are on top and the oldest layers on the bottom.

BN: What is the rover Curiosity up to these days?

Schmidt: Right now the rover is drilling into rock; this is a first-time activity. We’re really excited to get those data down to Earth, which hasn’t happened yet. The rover is drilling rock, taking core samples and turning those samples into powder. The rover has instruments in its body that can analyze powdered samples. It can determine the mineralogy; it also heats up samples and analyzes gases that are emitted from the rock. The rover also takes pictures, shoots a laser beam at rocks and lays instruments down on rocks to collect elemental compositions.

BN: Will you ever visit Mars yourself?

Schmidt: The next Rover is set to go up in 2020. I think it’s possible within my lifetime that humans will go to Mars. But I wouldn’t want to do it – it’s too far away and I might not come back.

One comment on “From Brock to Mars and back: A Q&A with Mariek Schmidt”