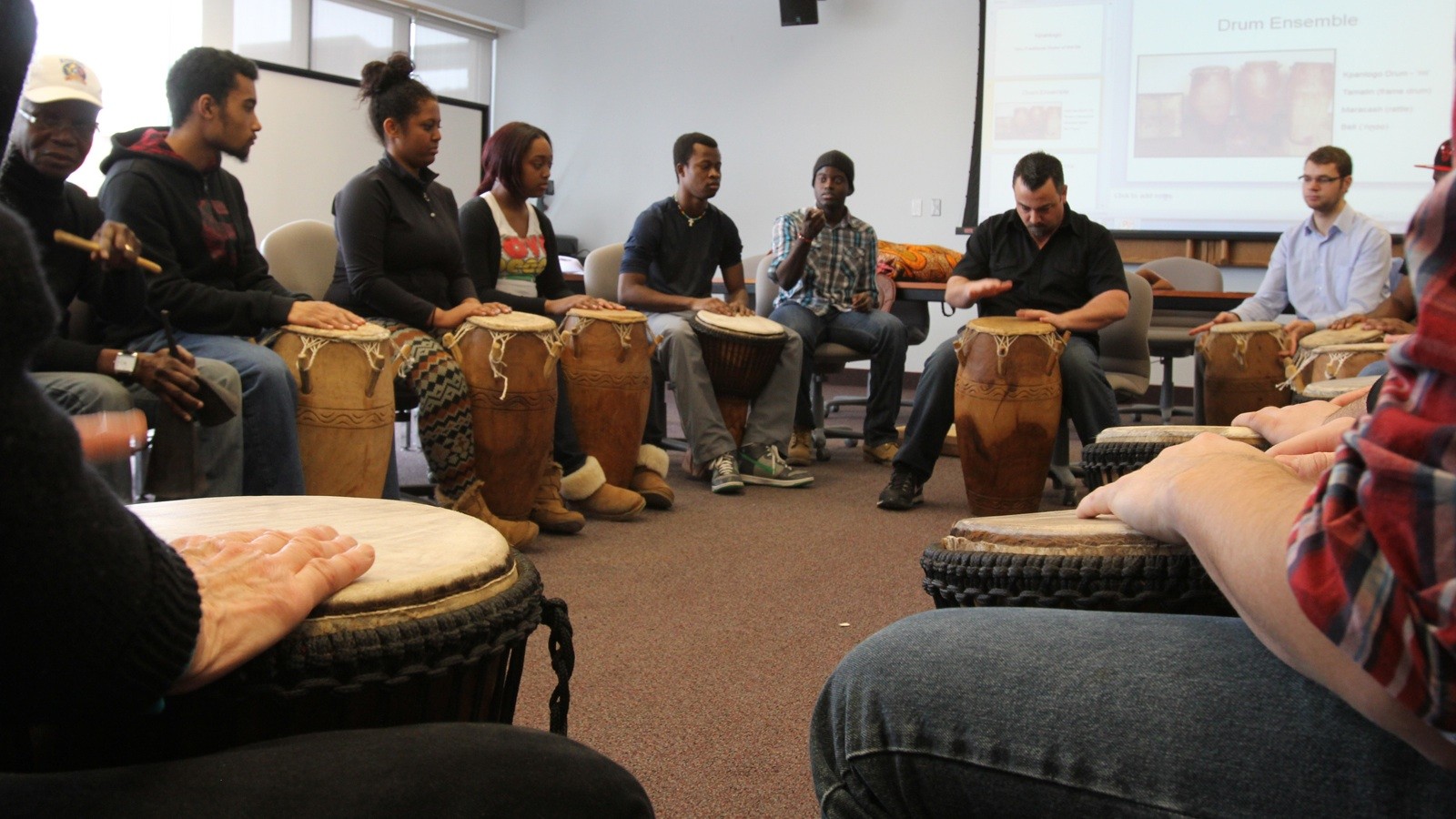 Staff and students participate in a West African drumming workshop with ethnomusicologist Gavin Webb. Webb is one leading two of several workshops during Brock's edition of International Development Week. When news stories emerge from countries, such as South Africa or the Democratic Republic of the Congo, chances are they’re a variation of a theme.

Mining strikes and police clashes, resulting in deaths. The plight of the child soldier.

But John Kaethler, an organizer of Brock’s edition of International Development Week, says there’s more to these nations and their people than the negative headlines.

“If you go to these countries, there are many more positive things happening,” Kaethler said. “News is the negative things. It’s the school that burned down but not the school that opened, so you get a biased view of that part of the world.”

Enter International Development Week, an annual series of workshops, seminars and guest lectures dedicated to drawing attention to all the good happening in what’s known as the majority south or developing countries across the globe.

This year’s edition, which runs from Feb. 4 to 8, has activities to appeal to all senses, including an exhibit of Haitian artist Jean-Salomon Andre’s work, drumming workshops, opportunities to assess one’s international IQ and cooking demonstrations.

It also features the Wilma Morrison Lecture with guest speaker Superior Court Justice James Turnbull, who will talk about the work his NGO, the Joy and Hope of Haiti, has done helping Haitian orphans. Turnbull has also worked with Haiti’s justice ministry to reform the country’s legal system.

“You can’t have development if you don’t have laws,” Kaethler said.

In addition, International Development Week also shows students the opportunities they have to take their learning about the developing world outside the classroom.

A presentation on Brock’s Global Transitions program, which provides upper-year students with the chance to spend a semester in Ghana, and a session on Brock Abroad, an experiential learning program in Namibia, are also on the International Development Week bill.

“We’re trying to make (the sessions) diverse because humans use all five senses but often all you get in universities is one sense: the auditory,” Kaethler said. “We’re trying to bring all senses together to learn about different cultures because every culture has something to teach us.”

Mostly, though, International Development Week is about showing Brock is closer to the developing world than at first glance, Kaethler noted.

“Often, we think of Africa as that continent over there but we have Africa at Brock as well,” he said. “We have students from Africa here and we should try to take advantage of that in a positive way and learn from them as they’ve learned from us.”