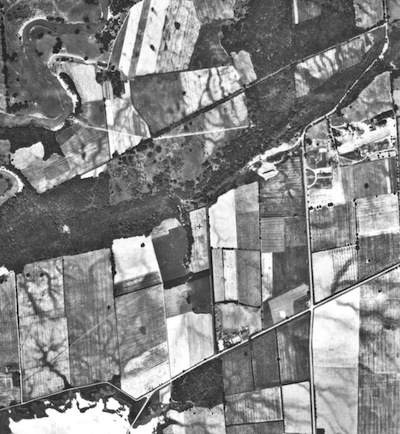 An aerial photo taken in 1934 of the land that today is Brock's campus. An aerial photo taken in 1934 of the land that today is Brock's campus.

Google Earth now provides users with a view to Niagara’s past, thanks to Brock University’s James A. Gibson Map Library.

The satellite image database features a detailed 1934 view of Niagara for the world to explore, using the unique aerial photo collection from the map library.

Until now, Google Earth’s historical imagery for Niagara dated back to only 1996. The addition of Brock’s historical aerial photos, digitized by library staff to be superimposed onto Google’s virtual globe, allows users to study the region – their house or neighbourhood, a shipwreck on the Welland Canal – in a way they never could before.

The detail achieved through high-resolution digitization, coupled with the ability to zoom in closely on an area, magnifies features that aren’t even visible in the original paper photos.

This enhancement to Google’s database of imagery is one that no other university has accomplished to such an extent.

Brock’s map library has made a commitment to preserving its historical collections through the use of digital technology. Using Google Earth’s time slider tool, the historical landscape can be easily compared to present day, which is a critical source of information for environmental, historical, biological, economic and urban planning applications.

The Niagara imagery has also been loaded to the Region’s Niagara Navigator web mapping portal.

The map library is currently digitizing its 1955 series to add to this collection.