Dramatic Arts play explores the death of a young girl 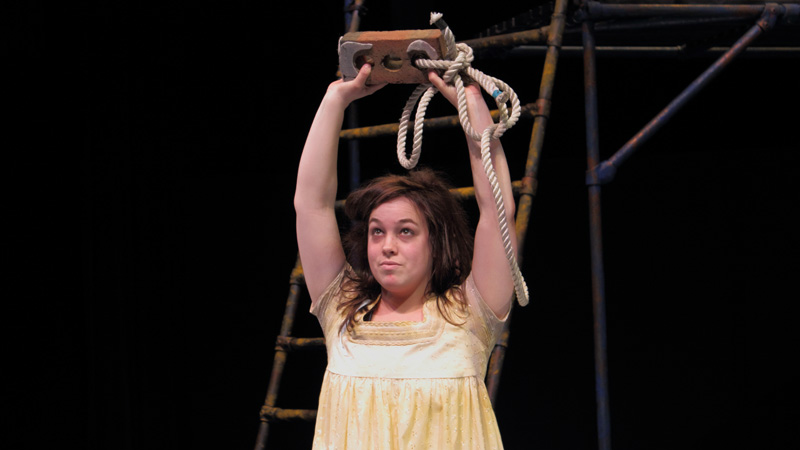 Kaitlin Race plays Isobel in the Dramatic Arts production of Lion in the Streets. Kaitlin Race plays Isobel in the Dramatic Arts production of Lion in the Streets.

The burden of memory and the power of forgiveness are themes of the upcoming play Lion in the Streets, which will be performed by the Dramatic Arts department from Feb. 16 to 18.

Judith Thompson’s play follows the ghost of nine-year-old Isobel, a Portuguese immigrant who died 17 years earlier. Searching for her killer, she watches over the living and suffers with them, finally experiencing possible salvation.

A Governor General’s Award recipient for drama, Thompson has penned plays such as The Other Side of the Dark and White Biting Dog. Brock’s performance is directed by Danielle Wilson and designed by David Vivian. Its contemporary movement is choreographed by Gerry Trentham, artistic director of Toronto’s pounds per square inch. Eight Dramatic Arts students will star: Kaitlin Race, Emma Bulpin, Kédie McIntyre, Olivia Jackson, Tanisha Minson, Dylan Mawson, Matt DaCosta, and Jonathan Phillips, with assistant direction by Rebekka Gondosch. The students will play 29 roles.

The play is intensely provocative, Wilson said, and “very funny and very beautiful.” Matt DaCosta as Michael, top, fights with Jonathan Phillips as Rodney as Kaitlin Race looks on in Lion in the Streets.