Brock celebrates its place in the biosphere 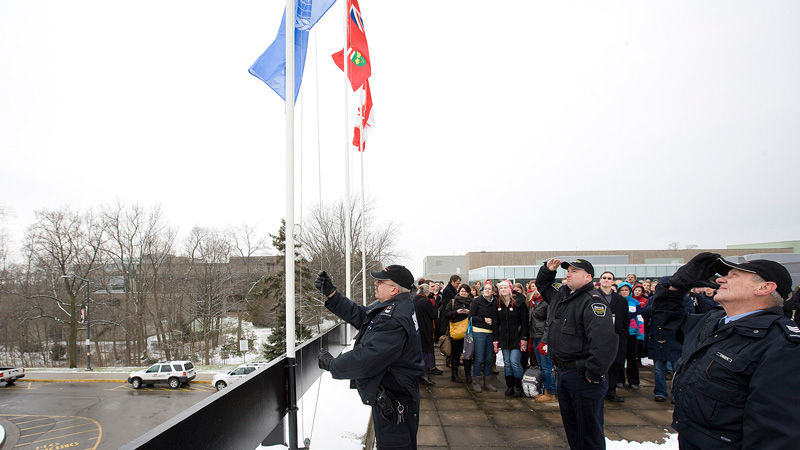 A crowd gathers at the raising of a United Nations flag at Brock's St. Catharines campus. A crowd gathers at the raising of a United Nations flag at Brock's St. Catharines campus.

Brock is located within the Niagara Escarpment Biosphere Reserve, and today, it raised a United Nations flag to celebrate that.

The ceremony was co-ordinated by Brock’s new Environmental Sustainability Research Centre (ESRC), which does transdisciplinary research regarding the environment, sustainability and social-ecological resilience.

Brock is one of only a handful of Canadian universities located in a UNESCO Biosphere Reserve. The Niagara Escarpment is one of 16 reserves in Canada, and is part of a network of 580 reserves in 114 countries.

“Brock’s location in a World Biosphere Reserve highlights the imperative of reconciling economic and social development with ecosystem integrity,” said ESRC director Ryan Plummer. “In response, the ESRC brings together individuals from across Brock University and beyond to engage in the enterprise of sustainability science and embrace UNESCO’s invitation to become a site of excellence.”

The ESRC will help strengthen existing research networks between the University and local and international communities. It will also help the growth and development of new research partnerships to look at a wide range of sustainability issues.

David A. Walden, Secretary-General of the Canadian Commission for UNESCO, welcomed Brock’s willingness to serve as a bridge between research and community action.

‘‘As we approach the conclusion of the United Nations Decade of Education for Sustainable Development (2005-2014), education institutions have a crucial role to play in translating knowledge about sustainability into practical tools and resources.”

The ESRC’s key areas of research include:

“The future of humanity depends on our ability to transcend the often contradictory relationships between economic practices, social progress and the natural environment,” said Thomas Dunk, Dean, Faculty of Social Sciences. “Brock’s location in a UNESCO Biosphere Reserve is strong reminder of our responsibilities as educators and researchers in this regard.

“Initiatives such as the ESRC demonstrate the commitment of Brock faculty members, staff, and students to leverage knowledge from across disciplines to address the most pressing issues of our age.”