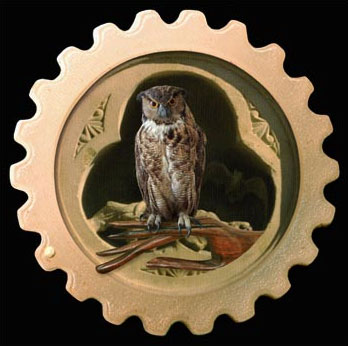 Worth Having (owl) by Jean Bridge

Thomas S. C. Farrell was an invited speaker at the Korea TESOL conference in Seoul, Korea on Oct. 15 and 16 where he gave one featured talk and two featured workshops on Reflective Practice.

Michael J. Armstrong, associate professor, Faculty of Business, gave a presentation titled “A Taste For Quality” to the American Society for Quality (ASQ) branch in Hamilton on Oct. 25.

Office of the Vice-President Academic

Patrick Beard (co-ordinator of Academic Reviews and Planning) recently attended the annual meeting of the Canadian Institutional Research and Planning Association (CIRPA) in Fredericton, NB. He made a presentation (“Surveys: Getting the Reluctant to do the Irrelevant for the (mostly) Uninterested”) and facilitated a Discussion Group on survey research and methodology. He then attended the annual general meeting of the Canadian University Survey Consortium (CUSC).

Christine Daigle presented the talk “Ambiguity, Volatility, Trans-subjectivity, Authenticity” as an invited speaker for the Department of Philosophy’s Colloquium Series at the University of Oregon on Oct. 27.

Charles Burton presented a paper “Implications for the Government of Canada of Closer Economic Engagement with the PRC” at the panel on Canada-China relations held in conjunction with the book launch for The China Challenge: Sino-Canadian Relations in the 21st Century (to which he contributed) at the University of Toronto on Oct. 18. Worth Having (owl) by Jean Bridge

Jean Bridge of the Department of Visual Arts was part of the exhibit “Worth Having” from Oct. 29 to 31 at the Toronto International Art Fair. Her work was part of the Red Head Gallery’s exhibit at the Metro Toronto Convention Centre.